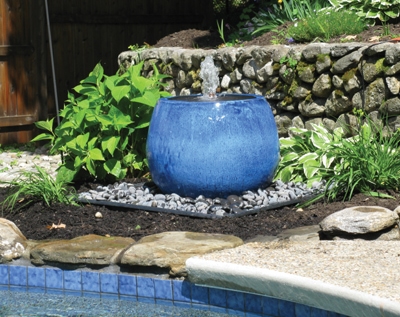 Create a beautiful water feature with some simple materials and a little ingenuity.

Installing a disappearing or hidden-basin water fountain doesn’t take up as much space as a waterfall or Koi pond but still gives you the sound of bubbling water and a great looking focal point for your landscape.

With a disappearing fountain, water is pumped through and out a fountain standpipe from a hidden reservoir buried in the ground. The water then overflows the basin rim and seems to disappear into the ground.

Installing a hidden or disappearing water fountain is a great DIY project and a way to add the soothing sound of moving water to a patio, pool or flower garden area

Recently a friend gave my wife and me a beautiful blue glazed pot for our wedding anniversary. The blue glaze matched the tiles surrounding our pool. My wife has always wanted a water feature by the pool and asked me to make this glazed pot into a water fountain. I recall her saying, “That shouldn’t take you too long, it seems pretty easy.”

So my “honey-do list” on that weekend was to learn how to build a hidden water feature using the glazed pot. After some research I learned that a glazed pot is suitable for a fountain and has a life expectancy of 20+ years. I was happy with that.

I chose my location based first on the fountain’s best setting in the pool area and second on its access to power. The spot I chose was at the end of the pool near a table, chairs and umbrella. This location was also suitable to run electrical conduit by following the stone wall.

My vision was to have a 3/4-in. copper pipe protruding approximately one inch above the waterline at the glazed pot’s rim. The water plume will cause the water in the pot to overflow and run over the pot’s side, disappearing into river rock stones around the pot’s base.

I needed a method to collect the overflow water and recirculate it back to the fountain. After visiting my garden center I learned that they sell plastic basins with a grill specifically designed for what I needed. The basin is called a “disappearing fountain basin.”

I bought the basin and a pump suitable for recirculating the water.  Next stop was the hardware store where I purchased some copper pipe, a quick-disconnect coupler, copper elbows, a few stainless steel clamps, a shutoff valve and some marine epoxy.

At this point my idea was a theory. I was still unsure how I was going to configure the fountain pipe and secure it to the pot.

I wanted to achieve several things with this project:

1. I wanted to install a shutoff valve to control the flow of water.

2. I wanted to be able to disconnect the pump from the bowl for winter storage.

3. I wanted to be able to hear the splash of the water as it overflows from the pot.

4. I wanted to be able to easily drain the basin to service the pump if needed.

5. I wanted to control the pump with a timer.

The Hidden Reservoir Basin. I purchased my pump and basin from a local nursery. The basin is 36” x 36” x 14” deep and is made of reinforced plastic. The grating is reinforced PVC with a mesh netting covering the grate. The mesh netting helps keep debris and small stones from falling into the reservoir.  Cost for the basin was $200.00.

The basin will house the reservoir water pump, some pipe and other connections and will be filled with water.

This basin is designed to be installed at ground level and covered with decorative stones. I planned on using Mexican beach pebbles, which are black and smooth.

Water Pump. With help from the nursery’s water fountain expert, I chose a Little Giant submersible pump which is designed for continuous circulation. This pump can handle up to 400 gallons and pumps 475 gallons per hour. The pump cost $100.00.

I plan on running this pump only 16 hours a day and controlling it with a timer.

To keep my options open, I chose a pump powerful enough to push the water above the waterline. If it proved to be too powerful I would restrict the water flow with the shut-off valve I purchased. (It’s important NOT to put anything that restricts the flow of the water ahead of the pump intake.)

I played around with different pipe configurations, swapping elbows and hoses until I came up with a design I liked. Remember, my plan was to make the pump easy to disconnect. I finally decided to connect the shut-off valve with a pair of 3/4-by-3/4-in. nylon barb adapters and stainless steel clamps. I wrapped Teflon tape to the nylon threads before screwing them into the shut-off valve. The hose that came with the pump screws onto the pump and stays in place without connectors. This allows for quick-disconnect to clean or store the pump.

To make the transition from pump hose to main fountain, I chose a 90-degree PVC irrigation elbow insert (1-by-3/4-in.) to connect to copper pipe. The PVC elbow connects to a 3/4-in. copper threaded “X” male adapter fitting.

Attached to the disconnect fitting is a long piece of 3/4-in. copper pipe, which makes up the main fountain pipe that will run up and through the basin.

The glazed pot will be installed on the basin. Installing this hidden reservoir required my digging a hole3-by-3-ft. square and about 14 in. deep.

We lucked out and were able to get our hole in without having to move an irrigation pipe that we discovered in the bottom of the hole. When I saw this pipe, it gave me an idea that I might want to add an auto-refill to the basin so I wouldn’t have to refill it once a week due to evaporation.

When preparing the reservoir basin hole, use care to make sure the bottom of the hole is flat and level in both directions. If not, the reservoir will be out of level and you will not be able fill it to capacity.

Once the hole was excavated and leveled we installed the reservoir, checked again for level, back-filled and tamped.

I chose to leave the reservoir basin approximately 1- to 2-in. higher than ground level to help keep mulch and dirt out of the water in the basin.

Because the ground slopes away, the reservoir sticks out of the ground higher in the rear. Since this area can’t be seen from the patio, I decided not to slope the ground up to the basin.

Part of my plan was to install a 3/4-in. copper “standpipe” up through the basin’s bottom to deliver a plume of water at the top edge of the basin’s rim. The basin will hold water and the standpipe will prevent water from flowing out of the pot when the pump is operating.

To do this I used a 3/4-in. masonry bit to drill a hole through the center of the pot. This hole will allow the standpipe to reach the pump in the hidden reservoir below. Drilling this hole was nerve-racking because I did not want to damage the pot. I knew the replacement value was approximately $200.00.

While drilling I had to ream the hole a bit for the pipe to fit. I wanted a tight fit. Test all the components for a sure fit before final assembly.

I then placed the pot onto the reservoir basin and checked for level. The pot can be shimmed a bit if needed.

Next step was to drill a hole through the reservoir basin grate for the copper standpipe to reach the reservoir and pump. I used a 1-in.Forstner bit for this, but a spade bit would work too. I later ended up enlarging this hole so I could remove the pot, if necessary, without removing the standpipe and quick-disconnect fitting.

The existing glazed pot came with two drainage holes that I filled in with Marine epoxy.

Cut an Access Hole. Using a reciprocating saw and a metal cutting blade, I cut a 1-by-2-ft. access panel into one corner of the grating. This panel allowed me to access the pump and shutoff valve to control the water flow, as well as the copper standpipe in order to disconnect for winter storage. This panel provides quick access without having to remove the glazed pot.

Soldering the Copper Standpipe Connections. After dry-fitting everything, I soldered all of the copper pipe fittings. This job required basic soldering tools and materials—copper solder, flu, pipe tool and a propane torch.

Test the Components before Installing. Testing the pump and fittings is important to work out any problems or issues. When I tested my fountain assembly, the flow of water from the pump was strong. I was glad I installed the ball valve to control the flow. When the standpipe was held vertical, the pump pushed out a 5- to 6-in. plume of water.

The glazed pot was heavy when empty, and adding water to it at approximately 8lbs. per gallon increases this weight dramatically, so I added cinder blocks directly under the grate where the pot sits. The blocks will take the weight and stress off the PVC grate and transfer it to the ground.

I then routed my copper fountain standoff pipe through the grate and attached it to my pump and hose assembly. I lowered the basin pot over the standoff pipe and used my level to hold it plumb.  I then used marine epoxy to secure the pipe to the pot so it could hold water. The copper standpipe protrudes 2-in. above the basin rim.

Once the epoxy dried I checked again for level, shimmed as necessary, and then filled the basin with water. Test again.

I finished the top of the PVC grate with 1- to 2-in Mexican pebble rock to hide the PVC basin grate.

When activated, the pump pushed a 6-in. plume and the basin held water. As the pot overflows, the water follows the contour of the basin and drains back into the hidden reservoir where it “disappears” and is recycled by the pump. Finally, I added more rocks to hide the square edge of the reservoir and to overlap to the mulch.