How to Grow Vegetables in the French Intensive Gardening Style 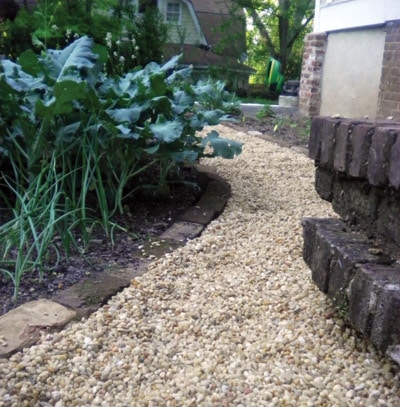 Making the most of a Backyard Garden

America’s doctrine of westward expansion, known as Manifest Destiny, is still ingrained in our subconscious mind today. Our country has a large and ever growing population, but we are still not as densely populated as Europe. America is an enormous country with some parts that are still uninhabited, albeit in harsh climatic zones. This lower density in population has allowed us to spread out and take up more space.

One area in which we do this is in farming and, to a smaller extent, home gardening. The traditional American garden usually consists of cultivated land in someone’s back yard with the crops laid out in long rows mimicking the design of commercial farms. Europeans, on the other hand, have much less land mass to work with and have had to adopt gardening techniques that are different from ours.

Many Europeans garden using a system commonly referred to as the French Intensive Gardening method, which originated in 1890 on a small plot of land on the outskirts of Paris, France. This technique made its way to America around 1966, thanks to Alan Chadwick who demonstrated this technique on an inhospitable hillside at the University of California’s Santa Cruz campus. John Jeavons, of Ecology Action of the Mid-Peninsula at Stanford, California, built upon Chadwick’s early work, and later published a book on the subject, How to Grow More Vegetables Than You Ever Thought Possible on Less Land Than You Can Imagine.

The French Intensive Method involves growing densely spaced plants in loose, well-drained soil that has been double-dug. Crop rotation and companion planting are also vital components of this gardening technique. The dense plant spacing helps to reduce the encroachment of weeds, and also helps to keep the ground shaded from the effects of the sun so it won’t dry out as fast, in addition to providing a high yield of vegetables. The loose soil permits water to easily drain through it and eliminates much of the resistance that would otherwise be encountered by the plant’s small feeder roots as they spread through the ground.

This method of planting reduces the amount of water that is used and favors light watering everyday with only one good soaking each week. Crop rotation, inter-cropping and companion planting all help to eliminate the need for environmentally dangerous pesticides.

Organic garden beds are usually laid out so that they are no more than five feet from front to back. The side-to-side width can be any length depending upon how much room the gardener has to work with. The purpose behind the 5-ft. maximum depth is so a person can reach the center of the garden bed from either side of the bed. This eliminates someone having to step in the soil or walk on it. Every time that someone puts a foot on the soil they are compacting the dirt, thereby reversing the benefits of the double-digging process. Most raised beds range in size from 4-by-8 to 5-by-20 feet. If a large piece of ground is to be cultivated in this method, imagine two raised beds that are separated by a narrow walkway laid down the middle of the space for access to the inside edge of each bed.

If a walkway is one of the features to be incorporated into a raised bed garden, consider covering the foot path with pea gravel or a similar substitute. The addition of gravel will delineate the border between the walkway and the growing areas, and also provide a neat and tidy appearance. Two of the aesthetic hallmarks of gardening with raised beds are the sense of order that they create and clean architectural lines.

Use old newspapers as a ground cover to keep weeds from growing up through the gravel. Commercial covers, similar to plastic window screens, are available on the market, however, these have two drawbacks. The first is that they cost money and the second is they are not environmentally friendly because they are made of plastic. Compare these problems with old newspapers, which can be collected for free from family, friends or the office break room, and they are also ecologically sound. Newspapers are biodegradable, will block out sunlight to keep weeds from growing, and will allow rain water to soak through them. The trick to using newspapers in this manner is to put them down in a thick layer. Excluding the monster Sunday and Wednesday editions, I like to use the entire newspaper from a normal day, with the exception of the sales flyers. I simply open it at the bi-fold on the front page and then lay it down, making sure it overlaps with any other pieces that it touches along the edges.

Once the garden bed location has been laid out in a place that will receive at least six to eight hours of direct sunlight a day, the first step to growing healthy organically grown plants is to begin with soil preparation: double-digging the ground. Gardeners who employ this method use the raised beds that are naturally created during the double-digging process. Begin by sectioning off your planned garden bed into 12-in. wide strips that run along the shortest sides of the bed. In other words, on a 4-by-8-ft. bed these strips will be 4 feet long and not 8 feet long. Dig the first 12-in. wide strip out of the ground to a depth of one foot and set this soil aside. Then dig down another 12 inches to loosen the soil.

Proceed to the next 12-in. wide strip and dig it out, but instead of setting it aside, place it in the trench made by the first digging. When you put it in the first trench it should be placed upside-down so the topsoil is on the bottom. After the top 12 inches of soil has been removed from the second trench, dig down another foot without removing the soil. This will loosen the second 12 inches of soil that will remain in the ground.

Follow this procedure with the third and subsequent trench, repeating the same procedure each time. Once you have reached the end of the garden bed, use the soil that you removed from the first trench to fill in the very last trench, remembering to put it back into the ground upside-down.

Double digging loosens the soil, causing it to mound up as it is replaced. This produces the raised-bed effect. Most gardeners employing this method maintain their raised beds in the shape of a slight mound. A gentle slope on all sides is preferred to having a perfectly flat planting bed.

Raised beds are usually surrounded with a wooden or cement frame to help hold the soil in place. According to the Alabama Cooperative Extension System, in publication ANR-1345 – Raised Bed Gardening, research has shown that the use of pressure-treated lumber is safe to use when constructing raised garden beds.

Depending upon the makeup of the soil, it may be necessary to add some type of natural fertilizer to the raised bed at this point. Homemade compost is one of the best choices, along with humus, cow manure and seaweed. Sometimes lime might have to be added to raise the pH level of the soil if it is too low resulting in acidic soil. This is especially true in humid climates. Rainfall will gradually leach out the basic minerals that are normally found in your dirt. This leaching process is exasperated by the use of fertilizers and organic matter from manure and compost material. Most local extension offices will provide soil testing to gardeners upon request and many stores sell soil-testing kits.

Just as life should be a balance, so should your garden soil be in balance also. Too low of a pH level is bad for the soil, but so is too high of a phosphorus level which is often caused by a prolonged use of large amounts of manures. Annual soil testing is recommended.

Once the garden bed is prepared it is time to consider what to plant and how to lay out the garden. The French Intensive Method allows for the planting of crops so that the leaves of the mature plants will just touch one another. Having the knowledge of a mature plant’s diameter is very helpful at this point. Seed packs and the labels included on seedlings provide a lot of good information about plant spacing, however, remember that this spacing information is for traditional farming techniques. So, as a good rule of thumb, for every two plants normally occupying a particular space, you can usually plant three and sometimes four plants without overcrowding them.

Companion planting involves the planting of crops that are beneficial to one another. For example, carrots should be inter-cropped with onions which create a natural insect repellent. Planting a few Marigolds, catnip or Golden Rod plants as a border can also help to deter many varieties of unwanted insects. Allow me to add here, that some insects are beneficial to a garden and should be encouraged. For example, lady bugs will eat the pesky aphid by the thousands.

Crop rotation is important to maintaining a healthy soil composition. The same variety, or even same family, of plant when it is grown in the same location as the previous year can cause disease, infection and in some cases even death of the plant. Plants of the same family should not be planted in the same place or in the same soil two years in a row. It is essential to plants each family of plant in a different place each year.

The concept of organic gardening arises from the belief that it is better to work with nature than it is to fight against it. The French Intensive Method is man’s attempt to work in harmony with nature rather than make nature conform to our will. The end results of organic gardening are healthy and vibrant plants that are free from the dangers of chemical pesticides while producing higher than normal yields in much less space.

So, take the plunge this year and make a single raised-bed garden in your backyard. It’s a wonderful project for the entire family to participate, and it is also very educational. Children are always amazed when the plants start to produce their first harvest.

Crop rotation is important for a healthy soil composition. Growing the same family of plant grown in the same location two years in a row can cause disease, infection and in some cases even death of the plant. It is essential to plant each family in a different place each year. The following chart categorizes common vegetables by family. 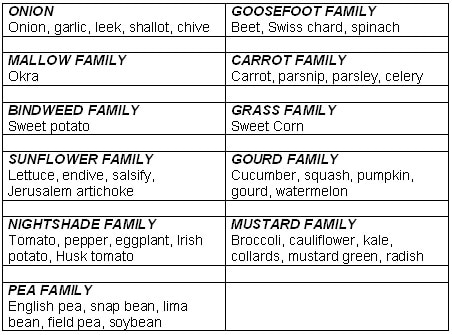