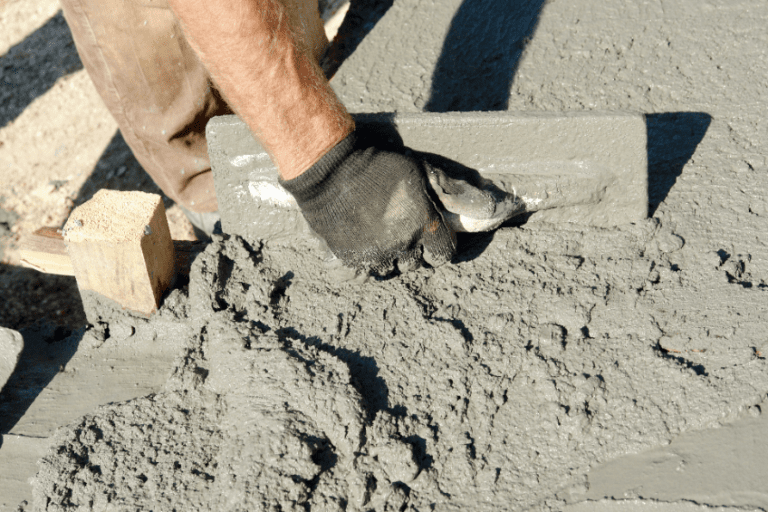 A concrete slab is one of the basic components of modern construction throughout the world. Whether used as a building foundation, sidewalk, patio or a mounting pad for your AC condenser, the method of construction is largely the same.

Building codes generally require that exterior stairways have a concrete footing or foundation. Without the foundation the steps will sink, heave or tilt to one side. This article shows how to build a 4-in. thick slab that will serve as a foundation for a set of deck steps.

Be prepared for a workout if you’re constructing a concrete slab. It can be tough work, requiring a lot of digging, mixing and other sorts of manual labor.

First, mark the perimeter of the slab location with stakes and string. Make sure the slab area is large enough to completely support the bottom of your stair stringers—or whatever else you plan to use it for.

Calculate the depth of the finished slab, including the concrete and the gravel base. Concrete is typically applied at a minimum of two inches, but I recommend a minimum thickness of 4 inches for a durable stair footing. With this type of application, both a fine and coarse aggregate are required. (I used ready-mix bags of Sakrete.)

Next, dig a level excavation to the dimensions of your slab, plus room for forming boards.

The first layer of my slab consisted of 5 inches of gravel. I shoveled in the stone and compacted this gravel bed down to 4 inches with a hand tamper.

Next, I built a rectangular concrete form using 2-by-4s fastened with some heavy-duty R4 screws from GRK Fasteners. Pros often use duplex nails to build the form, which are easy to pry out after the slab cures, but for a low-profile form like this I find using screws to be even faster. The forms frame the perimeter you marked with the stake and strings.

I leveled the form on the gravel bed and anchored it in place every 18 inches by screwing in stakes driven in the ground outside the frame. The stakes hold the forms securely so they don’t bow or blow out when filled with the heavy concrete. Once the stakes were in place, I cut them flush with the top of the form so I could use a screed board once the concrete was added.

There was a slight grade in the soil I had to overcome to ensure that my stair landing was built level. To accommodate the slope I partially buried one end of the form below grade, leaving the top inch of the form above ground to shed water. The opposite end of the slab was set above grade, with the edge of the form exposed. Removing the soil allowed me to level the form from left to right and front to back, and stake it securely. Be sure the form is flat enough to provide an even landing for the stair stringers but slightly sloped to shed water away from the home.

I then laid a grid of rebar on wire brackets that float the rebar about midway deep in the concrete forms. I tied the rebar intersections with wire.

I mixed up some quick-drying concrete, one bucket at a time, and filled my form. It took longer than expected and next time I’ll rent a concrete mixer.

You should spray down the form and the gravel with water when adding the concrete. Keep the entire work area damp throughout the installation of the concrete so the surroundings won’t leach moisture out of the concrete before it has properly cured.

I then used a wood float in a circular motion to work the heavy aggregate below the concrete surface and bring the “cream” to the top. If you prefer, you can roughen the surface with a broom as the concrete cures to give more traction to the top of the slab.

Allow the concrete to cure for a few days before walking or building on top of it. Because I was building during the heat of summer, I kept the slab covered in plastic to retain moisture for a slow, solid cure. 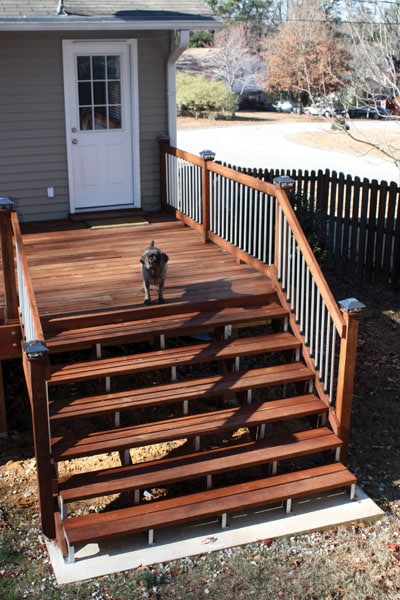 Concrete doesn’t achieve its strength from drying, but from curing, which is a chemical reaction. According to the experts at Sakrete, “Curing is the action taken to maintain moisture and temperature conditions in freshly placed cement mixes, allowing the cement to thoroughly hydrate.” This can be done by misting the concrete, placing wet covers such as burlap on the concrete, or by coating with a product such as Sakrete’s Cure n Seal.

Curing is necessary for the concrete to achieve all of the desired properties. Additionally, rapid loss of water from the surface of the concrete will cause the slab to cure at an uneven rate. This can happen during periods of high temperature or wind. If the top portion of the slab dries before the lower portion, the concrete will cure at different rates, causing the slab to develop cracks. Learn more at www.sakrete.com.