Update on Ladders and Ladder Accessories

Accessories such as ladder stabilizers increase safety and hold the ladder away from the building for unobstructed access to the work area.

Like it or not, many home repairs and maintenance chores require working atop a ladder. From simple indoor jobs, like hanging a light fixture, to roof work and gutter cleaning, there’s a ladder to fit every job. Here’s a look at a few advances in design and accessories that make ladder work a little less daunting for the home handyman.

Although I’m willing to work on a ladder on my split-level house, I won’t pretend to like it. I don’t like heights in general, and two stories is probably my limit. So, it’s not a happy moment when I’m halfway up a ladder and feel the thing sliding from beneath me. That’s happened in the past, and I managed to awkwardly jump to safety with my neck intact as the ladder crashed to the ground. I was lucky—and careless—but I learned a lesson: Always set up a ladder carefully before climbing on top.

The most elevated work around the home often requires an extension ladder, and the higher the ladder, the more important it is to exercise all safety precautions.

For work on extension ladders, I suggest adding a stabilizer to the top ladder. Stabilizers are available from a variety of manufacturers, and they generally consist of arm-like extension braces with rubber pads that grip the work surface to keep the top from slipping sideways. The Werner version that I bought simply clamps to the ladder frame beneath the top rung using a couple of wing nuts. These accessories distribute the load to prevent damage to materials like metal siding. Ladder stabilizers are also wide enough to span window openings, and they hold the ladder away from the building for easy, unobstructed access to gutters and overhangs. Prices for stabilizers usually range from $25 to $70 dollars, and they’re sold at most hardware stores and home centers.

The easiest way to raise a long extension ladder is to do it with two people. In this case, the ladder is extended as necessary and one person “foots” the first rung, holding the bottom of the ladder securely to the ground as the second person walks toward the house with the other end of the ladder, raising it with the first person’s help.

In some cases you can raise an extension ladder alone, but the ladder needs to be collapsed to its shortest height. First, brace the foot of the ladder against the wall and walk it slowly toward the base, rung by rung and hand by hand, until the ladder is upright. Rest the top of the ladder against the wall, roof or other solid surface. Then, lift the base out to a slight angle where it can temporarily rest without your support. Extension ladders are equipped with a lanyard and pulley to help extend the ladder. To use the lanyard, first foot the bottom rung, carefully tilt the ladder backward with one hand and pull the rope with the other to extend the ladder as necessary. Be careful of hazards to nearby power lines, people or other accidents waiting to happen.

Positioning the ladder at its final correct angle is one of the most critical steps of the setup. Too much angle and the weight of the user could bend the ladder, or the bottom could slide out of position. Then again, if it’s too steep the ladder could tip over backward. An extension ladder should be set with the base 1 foot away from the wall for every 4 feet the ladder reaches, or roughly a 75-degree angle.

Next, secure the feet. The base of the ladder should rest on level ground with the feet flipped in position. On some surfaces, such as wooden decks, you can nail a board down behind the feet to act as a cleat and prevent slippage. When setting up on uneven ground, it often helps to dig a small trench beneath the high foot of the ladder to level the base.

Some ladders now come equipped with adjustable leg-leveling extensions. These extensions are also available as add-on accessories, such as the Xtenda-Leg ladder levelers that bolt onto the bottom of your ladder. The ladder levelers allow you to adjust the length of each ladder stile independently of the other one—very useful for the many of us with sloped yards (www.ladderlevelersllc.com).

Before climbing aboard, make sure all locks are engaged and that the ladder is supported securely at all contact points. If the setup still seems the least bit unstable, then tie ropes to the ladder stiles beneath the lowest rung and anchor them to something solid. You can also secure the top of the ladder using rope or wire fastened to a couple of eye screws mounted in the fascia board.

Use both hands, while climbing, but if you must carry something, face the ladder and hold on with one hand. Never stand above the fourth rung from the top of an extension ladder.

Because ladders are generally large, heavy and bulky, they’re tough to store. However, different ladders serve different needs. A 6-foot A-frame stepladder wouldn’t do my gutters a bit of good. On the other hand, I’d never be able to weave an extension ladder into my house without putting one end or the other through the drywall. Multi-position ladders offer a cool compromise that minimizes storage requirements and makes portability easy.

In recent years, a wide variety of ladder manufacturers have employed a similar design into their own product lines. For example, Hercules Ladder Systems’ Model LS1A45H creates a height-adjustable stepladder, stairway ladder and 22-foot extension ladder. Join the outer sections together and create two scaffolding trestles. Hercules is the first manufacturer to include stainless steel, automatically-locking hinge-locks on all of its Type 1-A, Extra Heavy Duty models. Hercules ladders also feature exclusive “I-Beam” box channels and a patented anti-twist system for extra rigidity (www.herculesladder.com).

In the meantime, the Little Giant Ladder Company has been focusing on how to make a good thing better. Most notably, the company has recently upgraded its original multi-position design with LiteWave material technology, which utilizes the same proprietary alloys and processing techniques used in many of the military’s aircraft in development. The result is a rock-solid ladder that weighs 20 percent less than competing multi-use ladders (www.littlegiantladder.com).

A clever and compact approach to a collapsible ladder is the telescoping ladder. Much like an actual telescope, the side rails of telescoping ladders are constructed of tubular design that automatically lock in place at 1-foot increments, providing multiple sizes in one small package. A telescoping ladder is basically a “ladder in a box” that combines strength with portability. 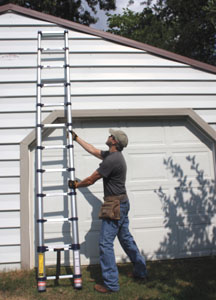 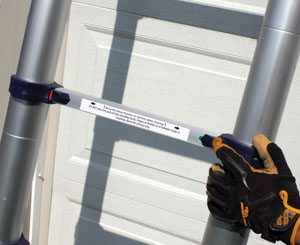 The EHT staff recently tested the brand new Xtend & Climb 780P Pro Series, Type 1A, rated for 300 pounds. Constructed of aerospace-engineered 6061 alloy, the ladder extends from a compact 2-1/2 feet to 12-1/2 feet, replacing a 16-foot extension ladder. As a safety feature, the ladder rungs include an angled thumb release mechanism with red or green indicators that tell you when the ladder rungs are securely locked in position. The 780P Pro Series includes an integrated carry handle, and a canvas carrying bag is also available (www.xtendandclimb.com).

Tripod or “orchard” ladders have long been used in the fruit tree industry because of their inherent stability when used on uneven terrain. For the same reasons a camera tripod has three legs, a tripod ladder has one less leg to keep in plane so the ladder stays level. That makes it much easier to position the three points of contact so the ladder—and the user—stand securely upright even when the ground is sloped or hilly. These days, tripod ladders are gaining popularity with homeowners not only for picking fruit and pruning trees, but also for general landscape maintenance and even work inside the home.

Traditional orchard ladders are designed for use on softer soil and depend upon slight soil penetration to hold the ladder in its setup position. These models should not be used “as is” on hard or slippery surfaces. However, Stokes offers an optional Hard Surface Kit consisting of non-skid rubber pads, rubber feet and aircraft cable to keep the third leg from sliding out too far (detachable for use over tree limbs), which makes the tripod ladders much more versatile for outdoor and indoor work. Plus, an optional Telescoping Third Leg allows the ladder to be used on steeper slopes, terraced gardens and even staircases (www.stokesladders.com).

Increasingly common among ladder manufacturers is the trend of integrating tool storage into the actual ladder. The top working platform may offer drawers or trays for fasteners, or holes and clamps to hold power tools or paintbrushes. For instance, Louisville Ladder’s new PRO TOP for Type IA Fiberglass Extension Ladders includes a non-conductive work tray, made of molded copolymer with tool slots to hold pliers, screwdrivers and more, as well as a tray with a large hole that allows placing a cordless drill chuck, hammer, etc. There’s also a stepladder version with a magnetic tray to hold screws, nails and other fasteners.

Or, you can use a wide range of standalone accessories to keep tools and supplies close at hand. The EHT staff often uses the Professional Ladder Utility System (PLUS) accessory kit from Creative Sales Company. The kit clamps directly to the ladder frame and contains a tool bucket, paint tray and universal tool holder (www.proladdersystem.com).

Another option is the new Belt Bucket paint accessory from PBP Industries. The Belt Bucket is a sturdy bucket that attaches securely to the waist with a belt, and features a convenient clip to hold a paint brush or mini-roller. It also includes a disposable, replaceable liner for quick change of paint color and easy cleanup.