Up Close with Circular Saws 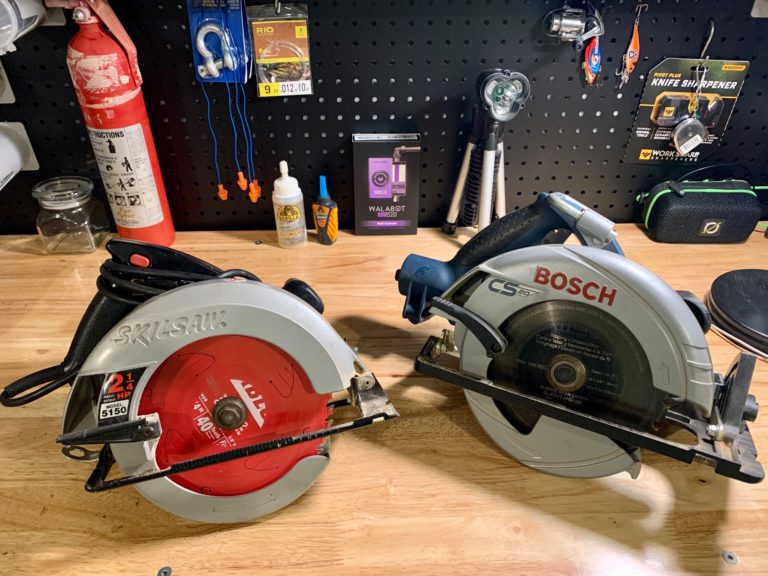 Both pro builders and do-it-yourselfers would agree—the two “must-have” power tools for any workshop are a quality drill/driver and a hand-held circular saw. With the appropriate blade, circular saws are capable of cutting wood, steel, masonry and ceramic tile. They can be used for crosscutting, ripping, mitering and beveling boards or plywood. They can even be used for cutting wood joints such as rabbets or dadoes, making them one of the most versatile saws around. 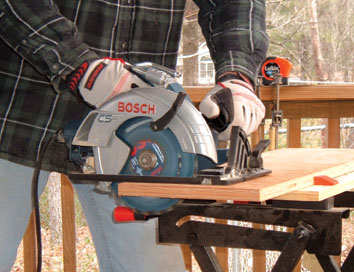 It’s my understanding that the first portable circ saw was invented in the 1920s, inspired by the need for a more efficient way to harvest sugar cane. After a few tool redesigns and a change in company ownership, the first circ saw manufacturer, the Michel Electric Hand Saw Company, was renamed Skilsaw. And the rest is history. “Skilsaw” became slang for all sorts of handheld circular saws to follow, regardless of manufacturer—much in the same way people down south refer to sodas. (In the South, you’re drinking a “Coke,” no matter if you’re drinking a Sprite or a Pepsi.)

Since its inception, the circ saw has skyrocketed to the top of the power tool wish list. And today’s saws feature adjustable cutting angles, adjustable cutting depths, rip guides and a wealth of new accessories that make using a circ saw easier than ever.

Two primary saw designs are available. The original Skil version, a “worm-drive” saw, has its motor mounted perpendicular to the blade, indirectly driving the blade via worm gears. The second and more common type, the “sidewinder,” was developed by Porter-Cable out of the need to get around the Skil patents. A solid choice for general cutting chores, sidewinders have the blade mounted in-line with the motor’s driveshaft. Sidewinders are lighter, more compact, less expensive and require less maintenance.

However, for heavy-duty use, a worm-drive saw can achieve considerably higher torque than the in-line models. For this reason, many pros use both types of saws—a worm-drive saw for framing and a sidewinder for finish work. Plus, Skil no longer corners the worm-drive market. Professional-duty, worm-drive saws are available from Makita, Craftsman, Milwaukee, Ridgid and Bosch.

In recent years, some manufacturers are using what’s called a hypoid gear. The hypoid design is similar to a worm-drive, but while worm-drives connect with two flat, interlocking gears, hypoid gears are tapered for increased surface area. Makita and DeWalt claim their hypoid design delivers more efficient power transfer. Still, many pro framers swear by their worm-drives. 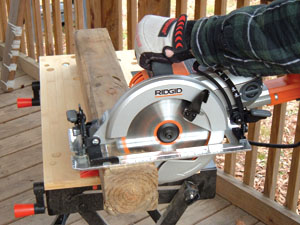 Pick the size of your saw based on what you’ll cut with it. Circ saws are sized by blade diameter. Blade size ranges from 3-inch trim saws up to hefty 16-inch framing models. However, the deepest cut a circ saw can make is less than half the diameter of the blade. For instance, a 6-1/2-inch Bosch cordless model can crosscut (blade at 90 degrees) almost 2-1/8-inch material. The same saw set at a 45-degree bevel has a cutting depth of 1-5/8 inch—enough to bevel-cut a 2-by-4, but not much more. For many users, this capacity may suffice. But if you tackle some major framing projects, you should probably pick a bigger saw. The most popular general-purpose saw is a 7-1/4-inch model with about a 15-amp motor.

Corded saws are measured in amps. Cordless saws, on the other hand, are measured by voltage. Cordless choices range from 14-volt to new 36-volt models, powered by lithium-ion batteries. A good, all-around cordless choice for homeowners is an 18-volt, 6-1/4-inch saw. 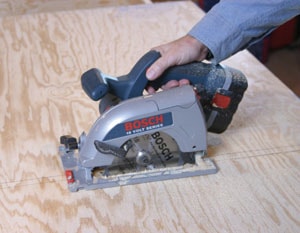 Battery-powered saws like this cordless Bosch are more powerful than ever.

The saw’s construction is another thing to keep in mind. Plastic housing is no longer a sign of an inferior tool. However, a wimpy base plate is. A high-quality base plate is an indicator of the saw’s accuracy, and the best saws have base plates made of reinforced cast alloy or heavy-duty plastic. The blade guard should also be sturdily constructed and move out of the way easily. Also consider the saw’s weight, the way it feels in your hand and visibility to the cutting area.

Safety features are also important. Be sure your saw is double-insulated to minimize electric shock. Many saws have a double activation trigger to make sure the saw only switches on when the user is ready. An arbor lock is a safety feature that secures the arbor nut, preventing the cutting edge from spinning while you change the blade. (Unplug the saw before changing the blade.) Plus, more and more models feature two handles, one in the front and one at the rear of the saw, for greater balance and user control.

Another common safety feature is an electric brake. Electric brakes reverse the flow of electricity in the motor when the trigger is released. This quickly stops the blade’s momentum in as little as two seconds, compared to 10 seconds for a saw without this feature.

You’ll most often use your saw to crosscut stock to length. I typically use a tape measure to pinpoint the cut location and a layout square to quickly mark a 90-degree cutline. Make sure the stock is fully supported and firmly clamped. Line up the cutline with the cut indicator on the saw’s base plate. When making any cut with a circ saw, always start the blade first, and then push it into the stock with a steady, fluid motion. You can hold the layout square against the saw to help guide a straight cut. You’ll also have better balance and control if you cut with the motor positioned on the supported side of the board. Use the same procedure for cutting miters marked on stock.

Ripping stock to width is often done with a table saw. But often a circ saw fitted with a rip guide can make this chore a breeze. The rip guide screws to the saw’s base plate to provide an adjustable fence that helps ensure a straight, consistent cut along the length of the stock. First, position the saw to match the cutline. Clamp the fence flush on the outside edge of the stock, and tighten the rip guide’s screws. Start the blade and push into the stock. As you progress, keep the fence flush, riding firmly along the edge of the stock for a straight, even cut. 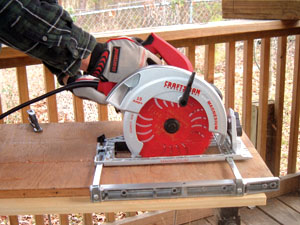 A sturdy rip gauge, as shown on this Craftsman contractor’s saw, makes it easy to cut stock to width.

Today’s saws also feature an adjustable base plate for dialing in a bevel cut. The available angles in degrees are printed right on the saw. Just loosen the thumbscrew on the front of the saw and pivot the plate until the indicator on the bevel gauge matches the angle you want. Some saws offer bevel cuts in excess of 50 degrees. Mark the cutline on your stock (the top of the bevel cut), align the proper cut indicator, and proceed with the cut just like you were crosscutting. In this case, you may have to move the blade guard out of the way to begin the cut. 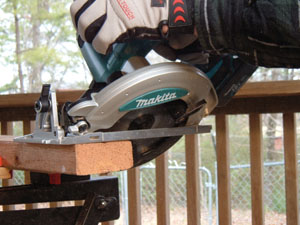 Adjust the saw’s base plate to make accurate bevel cuts.

One more important note: When making any of the cuts listed above, avoid kickback by setting the blade to cut no more than 1/4-inch beyond the stock. The depth-of-cut adjustment switch is located on the rear of the saw; twist it to raise or lower the blade’s position in relation to the base plate. Doing so will achieve the smoothest, most controlled cuts because a shallow blade depth prevents the blade from binding.  You can also use the blade-depth feature to adjust cutting depths for making rabbets, dadoes and even plunge cuts in the center of wide stock, such as plywood or OSB.

When it comes to home improvement, the applications for circular saws are endless, so choose wisely when you make your next saw purchase. Use it wisely and safely and you’ll have a trusty tool that will last for years. 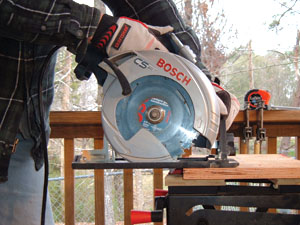 To avoid kickback, adjust the blade depth to cut no more than about 1/2″ beyond the stock. This is often called the “Three Teeth Rule,” meaning that no more than three blade teeth should be exposed on the opposite side of the stok when making a cut. 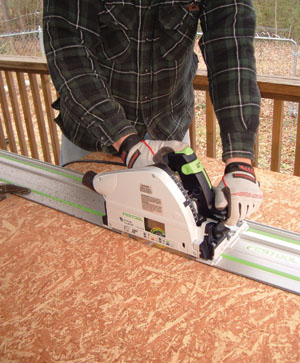 For greater control when cutting large sheet goods, you can use your saw in conjunction with a guide rail. The Festool guide rail shown is designed to work with the company’s special plunge-cut saw for smooth, splinter-free cuts every time.