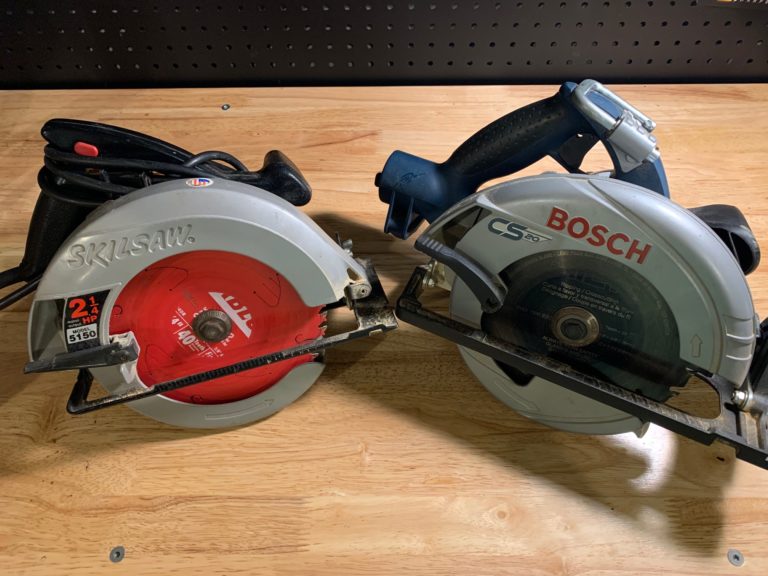 The Skil Corporation invented portable circular saws just after World War II and, in fact, “Skilsaw” became synonymous with the tools. The new saws allowed carpenters to cut through a framing 2-by-4 much faster than with a handsaw and thus helped fuel the booming home-construction business of the time. 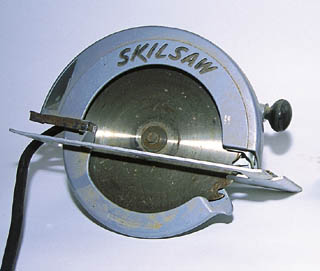 What to Look for

Circular saws are sized according to the blade diameter the saw accepts. The sizes range from small 4-inch trim saws up to big 15-inch framing saws. Circular saws are available as corded or cordless, with the latter models becoming increasingly more powerful and more popular. Corded saws are rated according to horsepower and range from 1/2 up to almost 4 horsepower. A good all-around choice for most homeowner chores, and the most popular size available, is a 7 1/2-inch saw with 2 to 3 horsepower. Cordless saws are rated according to voltage and range from 14 to 24 volts. An 18-volt, 6 1/2-inch saw is a good choice for homeowners.

Remember, however, the deepest cut that can be made by a circular saw is just a bit less than half the diameter of the blade. This means a 6 1/2-inch saw will easily cut through 1 1/2- or 2-inch materials on a crosscut. The blade will cut through almost 3 inches of material, which will make a 45-degree bevel cut through 2-inch-thick material. The larger the saw, the more power it offers, but also the more weight. The smaller trim saws are best for interior framing, even for cutting plywood or for chores where deep bevel cutting is not required.

Today’s saws are extremely easy and comfortable to use with a number of great features. Black & Decker features a plastic window for easy viewing of the cut line in their cordless model. Skil’s new corded, 7 1/4-inch, 2.6-horsepower circular saw with Sight Light has a built-in light for better view of the work piece. The new Craftsman Laser Trac model features a laser light showing where the blade intersects the work piece. Makita’s 7 1/4-inch corded contractor saw comes with a carrying bag. Milwaukee’s corded Tilt-Lok Handle Saw has an eight-position, user-adjustable main handle for maximum comfort and control in a variety of situations. A number of DeWalt corded saws feature an electric brake. Porter Cable offers a 4 1/2-inch trim saw, and a 7 1/4-inch, 15-amp framer’s saw with case. Several manufacturers offer cordless saws in a combo kit with a cordless drill, including the Bosch 24-volt, DeWalt 18-volt, Milwaukee 18-volt, Makita 18-volt, Grizzly 18-volt and Craftsman 24-volt models. 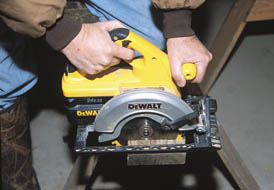 As with any power tool, safe usage of circular saws is extremely important, so make sure you follow all manufacturers’ safety rules. Circular saws now feature a lockout button in addition to the switch and both must be pressed to start and run the saw. A spring-driven retracting blade guard covers the blade except when pushed out of the way by the stock. Sometimes when ripping or making angled cuts, the guard must be manually pushed up and out of the way. Today’s saws have a finger tab that allows you to move the guard without getting your fingers close to the spinning blade. Always wear safety glasses when using a circular saw to prevent sawdust from being thrown into your eyes.

The most common use of the portable circular saw is crosscutting stock. The stock must be well supported and preferably clamped on a sawhorse or work surface with the stock protruding well away from the edge of the support surface. Draw the line to be sawn with a pencil while using a square or try-square held against the stock edge. The base plate of the saw has a line indicator. Position that indicator on the marked line, with the saw motor on the supported side of the stock. Stand behind the stock, slightly to the supported side. Align the line indicator with the marked line, start the saw and push the saw into the stock. Use a steady, even motion to complete the cut. Be careful at the end of the cut that you don’t angle off the line. You can also make the cut more precise by holding a try-square against the edge of the stock with one hand and guiding the saw base plate against the square. 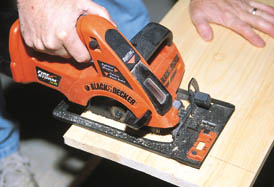 The most common usage of circular saws is crosscutting stock. The Black & Decker model shown has a window for easy viewing of the cut line.

Ripping is another common use of circular saws and rip guides, or rip fences, are standard with most of today’s saws. Rip guides are design features fastened into the saw’s base plate with a thumbscrew and adjusted to the width of the stock to be cut. Place the guide on the outside of the stock, start the blade and push the saw into the stock. Guide the saw with the rip guide riding along the outside edge of the stock. 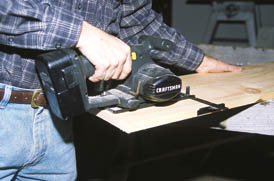 A rip fence, standard with today’s saws, guides the saw blade to rip stock to width.

Make miter cuts by first marking the miter lines with either the 45-degree arm of a try-square or with a bevel gauge. In this case you will have to lift the blade guard at the start of the cut.

Make bevel cuts by loosening the angle-adjustment knob and turning the saw to the correct bevel or angle. Make compound miter cuts by setting the correct angle and then cutting at a miter as well. 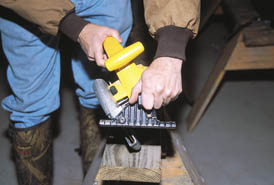 The saw base can be tilted, positioning the saw blade to make angled cuts. Compound miters can be cut in this manner as well.

Cut rabbets in the edges of the stock by setting the saw blade to the proper depth and using the ripping guide to guide the blade. First, clamp a thick board to the stock to create a surface for the base to ride on and make the edge cut. Then remove the guide board and turn the stock down flat. Again use the miter gauge to make the second cut to create the rabbet. 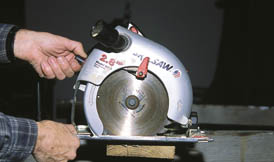 The depth of cut can be adjusted for full depth or any depth between to cut through heavy or thin materials or to make rabbets or dadoes.

Plunge-cutting or creating pocket cuts is also fairly easy with circular saws. Lay out the outline of the hole with a square and a pencil. Position the front of the saw base down on the wood surface with the blade directly over one line and at the rear of the cut to be made, but not touching the wood. Turn on the saw and, holding the blade guard up with the finger lever, slowly lower the saw into the stock until the base is flat on the wood surface. Continue the cut forward until you reach one corner. Repeat for the other cuts. Always turn the saw off and allow the blade to stop revolving before removing it from each cut. Do not try to back-cut with the saw. Because a circular saw does not cut straight up and down, there will be a slight bit of stock left in all four corners. Finish cutting these with a handsaw or saber saw.

Cutting large sheets of plywood is fairly easy with a circular saw if you follow a few tips. First, make sure the large sheets are well supported with a pair of sawhorses. Large, thin sheets, however, tend to sag. Use waste 2-by-4’s between the sawhorses to support thin sheets. Snap a chalk line or use the Craftsman Accu-Rip circular saw guide to rip stock up to 24 inches in width. For crosscutting, set the saw blade to a depth just a little more than the thickness of the plywood and cut across the waste 2-by-4’s. Set the 2-by-4’s aside for future plywood cutting chores.

A number of different woodworking blades are available for portable circular saws, including the standard general-purpose blades, rip, cut-off, as well as smooth trim/finish and even aluminum/laminate blades. Of course, there are also metal and masonry cut-off blades.

You can literally build a house with nothing more than a portable circular saw, hammer, measuring device and square – many carpenters have.