Home » Newest Articles » Selecting the Correct Pliers for the Job

Selecting the Correct Pliers for the Job 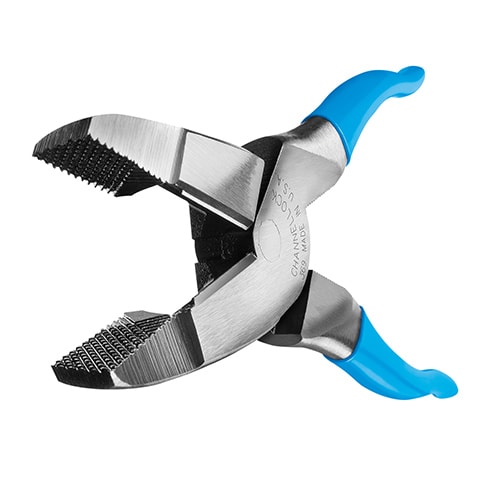 Knowledgeable tradesmen and serious DIY’ers know that a quality pair of pliers goes a long way toward getting a job done. They rely on their pliers to hold up under grueling conditions and applications.

Many consumers may not realize that there are many types of pliers for just as many uses—some of which are highly specialized so many people may end up using the wrong type of plier for a particular job. Because the plier market can be a little confusing, CHANNELLOCK®, the famous maker of quality tools for 129 years, like its original tongue and groove pliers, provides the following tips:

Pliers are designed primarily for gripping objects or cutting by using leverage. They require different jaw configurations to grip, turn, pull, crimp or cut a variety of items. These tools are commonly used in trades and occupations requiring dexterity.

A wrench is a single-handled tool. Adjustable wrenches utilize a jaw adjustment mechanism, while open-end and box-joint wrenches feature a single, fixed jaw capacity to accommodate different sizes of bolts, nuts or other items. 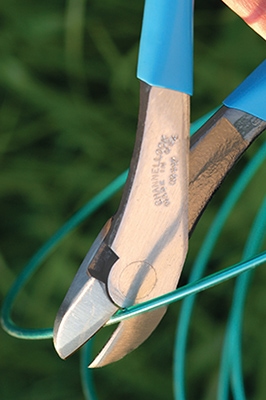 Cutting pliers include end-cutting nippers and side cutters.

End-cutting nippers have cutting blades on the end and are used to make clean cuts flush with a working surface. Cutting pliers are great for pulling small nails, rivets and wire ends. Side cutters, or diagonal pliers, are the most common form of cutting pliers and are used on virtually all forms of electrical wiring in the home, on the job and in automotive applications.

Linemen’s pliers are perfect for cutting, holding, shaping and twisting wire. Some even have built-in crimpers for electrical terminals. These pliers are heavy-duty, side-cutting pliers designed for all regular wire-cutting needs. In addition to cutting edges, the pliers also have gripping jaws. Lineman’s pliers can handle various moderate- to heavy-duty commercial and residential wiring tasks.

Slip-joint pliers can be found in nearly everyone’s toolbox. They are a versatile form of pliers that provide two jaw positions. One adjustment forms a jaw-to-jaw mating of the two halves—perfect for grabbing extremely thin objects. The second adjustment leaves a gap between the jaws and allows for a larger overall jaw capacity. Slip-joint pliers can be used in a number of varied gripping and turning operations including specialized functions such as removing hose clamps and pulling steel strapping bands, along with a host of traditional nut-and-bolt turning operations. Some slip-joint pliers also feature integrated wire cutters. CHANNELLOCK® even makes a model with specially designed recesses in the jaws for gripping hose clamps securely and keeping them from slipping from the jaws.

When using any tool, always wear safety glasses for eye protection. Never extend the length of handles to secure greater leverage; use a larger pair of pliers instead. It’s crucial to discard any plier that is cracked, broken, sprung or has nicked cutting edges. Make sure to inspect, clean and oil pliers occasionally. A drop of oil at the hinge will lengthen tool life and ensure easy operation. Unless specified as insulated handles, the cushion grips on pliers are not intended to give any protection against electrical shock and shouldn’t be used on live electrical circuits. 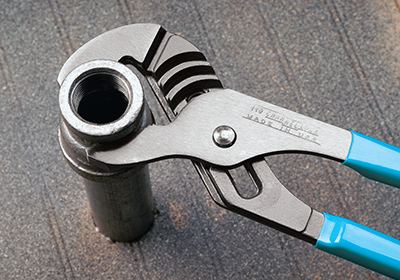 There are many choices and grades of quality in pliers. One of the determining factors between those that hold up under stress and time and those that do not is the manufacturing process. When looking for a pair of pliers, consider whether the tools are forged or die cast. CHANNELLOCK® pliers are forged, which helps to reduce the imperfections and strengthens the tool. Die casting allows for porosity and micro-voids in the steel, creating weakness and, ultimately, less durability.

Remember that spending a little more to purchase a pair of reliable pliers will save money over time. Properly cared for, they will be in your toolbox for life. 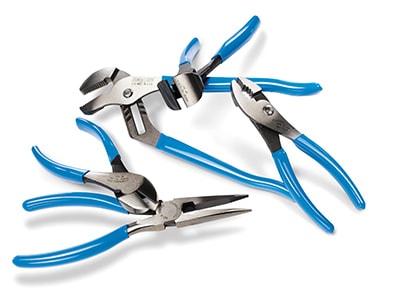