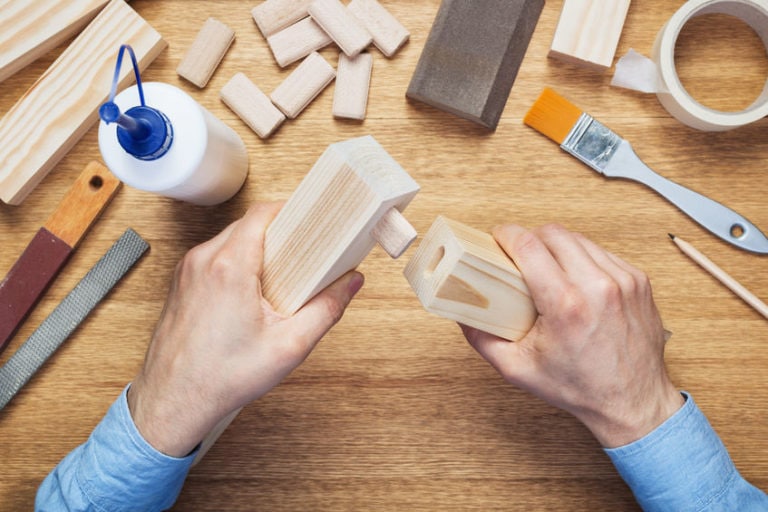 Mortise and tenon joints are some of the oldest woodworking joints. Many classic 18th century furniture pieces such as the Philadelphia Chippendale highboys, Sheraton desks and others feature these joints. Mortise and tenon, if properly constructed, can also be some of the strongest joints. They can be used for outside frames of cabinets and chests, inside drawer-support frames, for table legs and chair parts as well as other projects.

A mortise is basically a slot cut in a piece of stock. A tenon is a reduced tongue on the end of the stock that is cut to fit into the mortise. Several different types of mortise and tenon joints can be constructed. An open-end mortise joint has the mortise all the way through the stock, allowing the end of the mortise to be exposed. This joint is often used to connect rails to posts or legs. Running the tenon entirely through the stock and then cutting a mortise in the end of the tenon, allows the tenon to be pinned in place with a small wooden dowel or tapered stick. With the latter, a sturdy joint is created that can be tightened by driving the tapered stick further inward. The open-end mortise joint disassembles quite easily by knocking the pin out and removing the tenon. The hole for the pin should be offset just a bit on the crosspiece to provide a tightening action between the two pieces. This joint is quite common in early American and other casual styles of furniture. 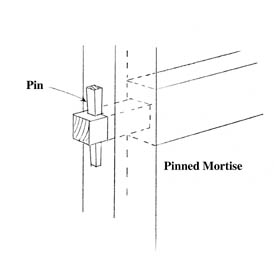 Another form of open-end joint is the corner mortise and tenon. The corner joint is commonly used for frame and panel sections such as raised-panel cabinet doors, or panel frames on chests. 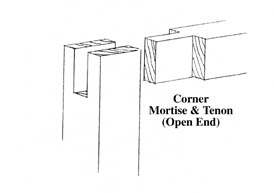 A blind mortise-and-tenon joint has the end of the tenon concealed. The mortise does not go all the way through the stock. This joint is also used for rails and posts. 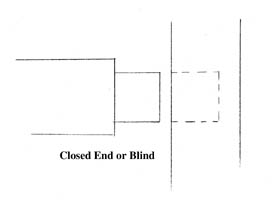 The tenons may be shaped in different styles as well. A straight tenon only has two cut sides. The opening of the mortise side is revealed. A shouldered tenon has all four sides of the stock reduced to conceal the mortise. By cutting a step in the tenon you create a haunched tenon that provides a good, strong joint used for frame construction. A bare-faced mortise and tenon has one edge exposed, normally on the inside of the piece. 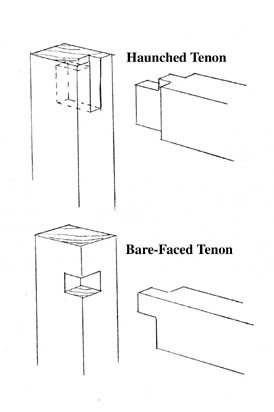 As with many traditional joints, mortise and tenon joints can be cut using hand tools or with a variety of power tools. The tenon can be cut with a hand saw, a radial arm saw or table saw, or with a dado blade in either of the latter. The mortise can be cut by using a chisel, or by first drilling holes into or through the stock, then finishing the mortise with a sharp chisel. 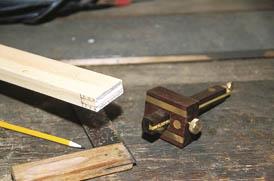 Tenons can be cut with hand tools. The first step is to mark the tenon with a square and marking gauge.

If the tenon is to be shouldered to conceal the mortise, use a square to mark the width of the shoulders back from the first marks. These are the mortise-limit lines.

Determine the thickness of the tenon. This will also be the width of the mortise cut and is usually one-third the width of the tenon stock. It’s a good idea to keep the cut a size that can be cut easily with an available mortise chisel or brace and bit. Mortise chisels commonly run 1/4, 5/16, 3/8 and 1/2 inch. For 3/4-inch stock, a 1/4-inch wide tenon would be appropriate. Use a marking gauge to mark the thickness of the mortise to hold the tenon. Either a very sharp pencil or knife should be used to create a fine line mark. Then mark the waste or area to be cut.

Mark the tenon outline on all four sides of the tenon stock. Once the tenon is outlined, use a pencil to mark the waste portions.

With the tenon work piece firmly clamped in place, use a fine-toothed backsaw to cut down from the face and back sides to the thickness mark of the tenon. Make these cuts on both sides. 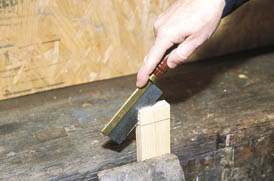 Use a small backsaw to cut the tenons.

Turn the stock with the end protruding from the vise and use the backsaw to cut on either side down to the first cuts. When making the cuts, make sure the saw follows the gauged line on both of the stock edges. Tilting the stock slightly in the vise makes it easier to start the cuts.

The next step is to cut the mortise. Cut the tenon first, because any discrepancy in the depth of cut from the tenon face stock can easily be adjusted by shifting the mortise outline. Position the tenon and mortise pieces on a smooth, flat surface. Make certain the tenon aligns properly with the mortise and that the mortise is marked to correctly receive the tenon. Again use a square and marking gauge to mark or remark the outline of the mortise. 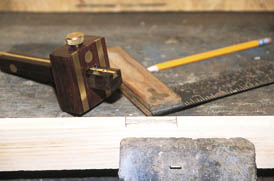 Mortises can also be cut with hand tools. They are also marked with a square and marking gauge. 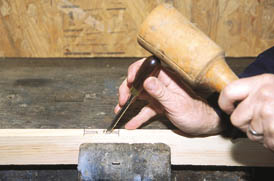 The mortise can be cut with a sharp chisel.

A brace and bit can be used first to rough out the interior of the mortise. If creating a blind mortise, measure the depth of the mortise and place a piece of masking tape around the bit at that point. This will prevent drilling too deeply. Make sure to keep the brace and bit straight up and down or at a 90-degree angle to the work piece as the holes are bored. Bore a hole near one end of the mortise, then bore another hole next to the first hole, and continue boring holes until the mortise is roughed out. 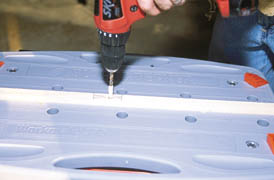 You can also bore holes to rough-cut the mortise, then finish with a chisel.

Smooth the sides and ends with a chisel. Use a corner chisel to finish off and square up the corners.

Tenons can be cut on a radial arm saw, table saw or even with a router in a router table. A dado head fitted to a radial arm saw makes quick work of cutting tenons. If several pieces are to be cut, it’s a good idea to make all similar cuts on all pieces, reset the saw and then make the next cuts. Set the saw blade height to cut away the material down to the tenon top surface. Make repeated passes with the dado head to cut away the material. Turn the stock over and repeat the cuts on the opposite side to create the tenon. To make a shouldered tenon, turn the stock on edge and repeat the steps.

Tenons can also be cut easily on a table saw. A shop-made jig makes it easy to hold the pieces upright to cut the ends of the tenons. The jig is sized to fit over the saw fence and a C- or wood-clamp is used to hold the stock in place. The fence, and blade height, are then set to make the end cut. Make one cut, sliding the jig along the fence. (The saw guard must be removed for this step.) Take extreme precautions to keep your hands away from the saw blade, use a push stick and, as always, wear eye protection. Turn the stock to make the other cut. Again, if several pieces are to be cut, it’s a good idea to make all similar cuts at the same time.

To finish the tenon, remove the jig and fence, reinstall the blade guard and use the miter gauge at 90 degrees to make the side cuts meet the end cuts. Shoulders are commonly cut by clamping the stock to the miter gauge and using progressive cuts to remove the waste. Or, a dado head in the table saw can be used to make all cuts, using progressive cutting. 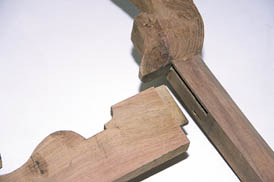 Corner mortises are also easily cut in the above manner on a table saw. They can be cut by clamping upright on the fence jig and making progressive cuts. Or, a dado head can be used to make one-pass cuts.

Mortises can also be cut with power tools. One method is to use a mortising chisel kit that fits on a drill press. These take time to set up, and a dedicated mortising machine makes the chore much easier. Both use a special, square-shaped chisel attachment with a rotating bit inside to cut straight-sided mortises. In both instances a clamp, built into the unit, is used to hold the stock securely during the boring operations. Progressive cutting is all that’s necessary to cut the mortises as long as desired.

Creating good mortise and tenon joints is “finish” work. It requires trial and error, trial fit, trial fit and more trial fit. The tenon should fit in the mortise fairly snugly, but not so tight it has to be hammered in place. Only pinned joints should require hammering. In most instances the joints are glued together once they fit properly. The single most important factor is making sure the face surfaces meet properly. Any unevenness can sometimes be adjusted by very slightly trimming either the tenon or mortise and shimming to bring the pieces flush. The old-time craftsmen I worked with, however, wouldn’t have allowed that. “Start all over again” would be their answer. Mortise and tenon joints, however, don’t have to be daunting, they can be fun, a test of your extreme woodworking skills and very beautiful.