How To Install A Window AC Unit In The Wall 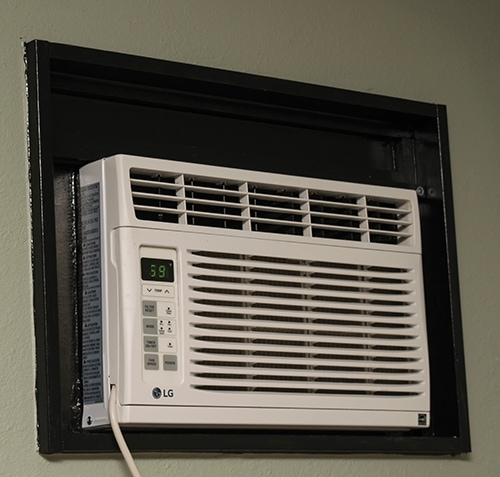 We don’t get much heat or humidity where we live but when we do, temperatures can get over 100 degrees, which makes having air conditioning a pretty good idea. Getting through those few weeks of hot weather can often be accomplished with a window air conditioner or two.

Being from a region where AC is not often needed, I’ve used lots of window air conditioners, but not often in the way they were designed. This is primarily because these units can interfere with emergency egress. Building codes rightly require that bedrooms provide an alternative escape route in case the door into the room cannot be used, and this alternative escape is often through the window. Expecting children and others with physical limitations to handle an air conditioner before they can get out of the room can be disastrous.

Some of our relatives use freestanding portable air conditioners, but these also have their drawbacks. They take up room and still need to be exhausted out-side, causing window access challenges as well.

Installing a window air conditioner in its own glass-less window opening is a good way to handle several issues raised by window units while taking advantage of their low costs and compact size.

I usually install these units high on the wall so other furniture can be used below, and so the exterior portion can be better protected by the overhang of the eaves. This is important because I leave the units in place year round. We find a few more occasions to use them throughout the year for unseasonal hot days and even to provide a little white noise when ambient noise in the house or in the neighborhood gets a little out of spec.

Here’s how I made a window opening in a bedroom to be used exclusively for an air conditioner. 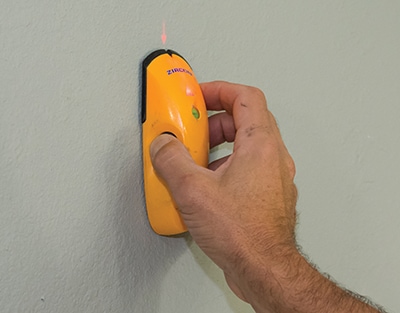 Use a stud finder to locate two adjacent stud bays that will provide enough room for the opening. 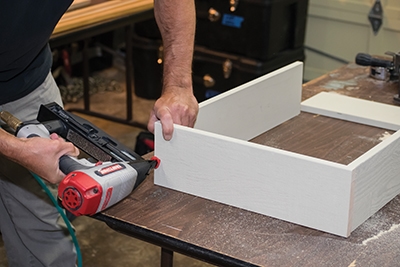 Build a jamb box of 1×6 pre-primed pine about 4 inches wider and 4 inches taller than the air conditioner required. This allows for a replacement unit, which might be larger. It also provides plenty of air circulation around the appliance, which can get a bit tucked in depending on the thickness of the wall. 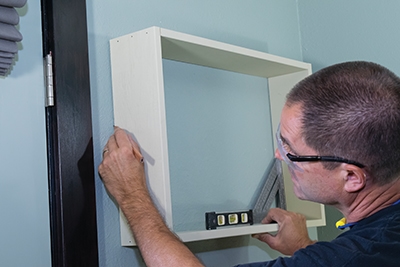 Use a Speed Square and a torpedo level to make sure the jamb box is both level and square while marking the out-side perimeter of the box on the wall. 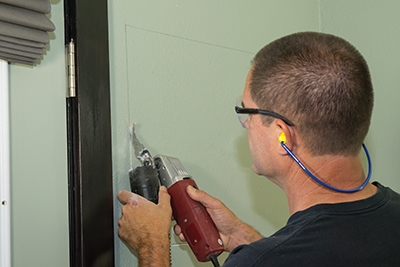 Use a multi-tool to cut the drywall just outside of the pencil line. I wanted a tight fit to avoid using trim on the inside, but you can plan to use trim if you want. Note the shop vac hose in my left hand to grab most of the drywall dust. 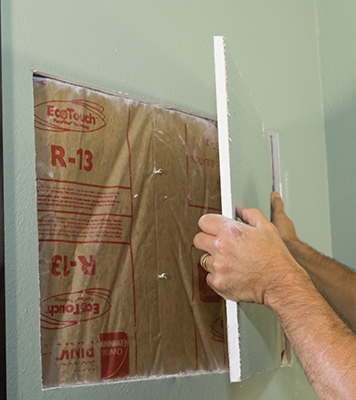 Remove the drywall to reveal insulation and the edge of a stud. 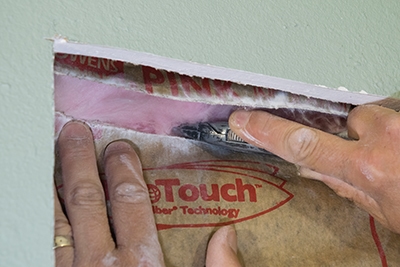 Use a utility knife to cut the roll insulation at the top and the bottom of the drywall opening. 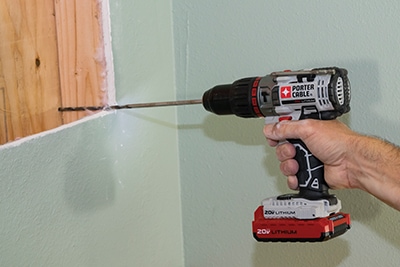 With the insulation removed, mark the opening corners by drilling through the exterior sheeting with a long drill bit. 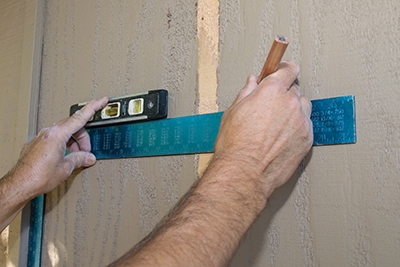 Use a torpedo level and framing square to lay out the opening on the exterior as indicated by the four corner holes drilled from the inside. 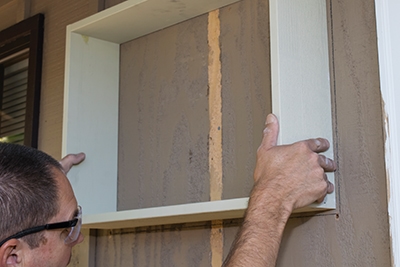 The jamb box can serve as a guide to make sure the layout lines give plenty of room. (I did plan to use trim on the exterior.) 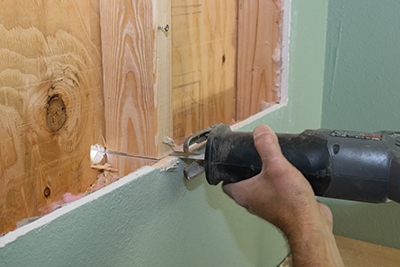 Before cutting the siding, drill holes large enough for a reciprocating saw blade next to the stud and cut it from the interior. 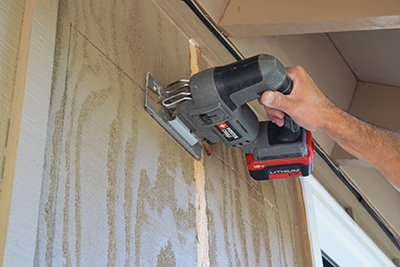 I used a jigsaw to cut the siding from outside. 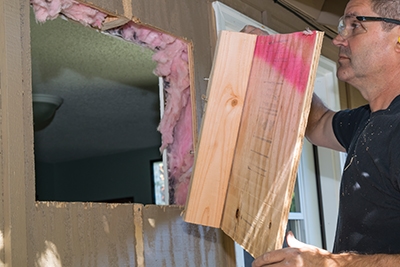 The section of stud came out with the piece of sheet siding. 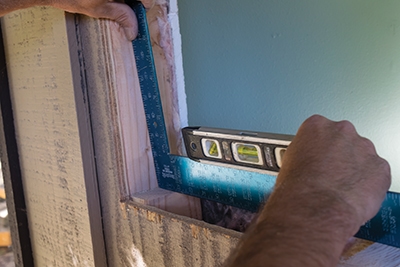 I positioned 2×4 blocks level with the top of the cut-off stud and nailed them into the studs on both sides of the opening for added support. 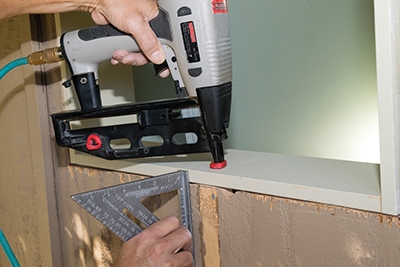 Make sure the jamb box is flush with the exterior sheeting then nail it into place. Paying attention to this step makes it easy to fit exterior casing. 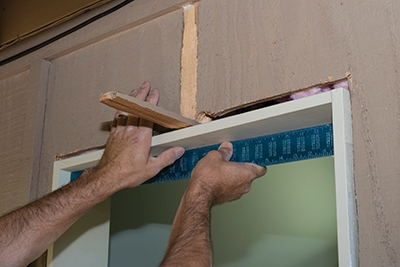 I also used a straight edge and shims to make sure the jamb box maintained straight lines as it was installed. 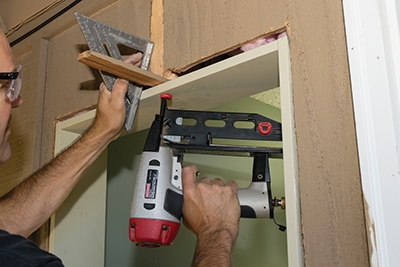 Nail through the box and shims and into the framing while making sure the box is flush to the exterior. 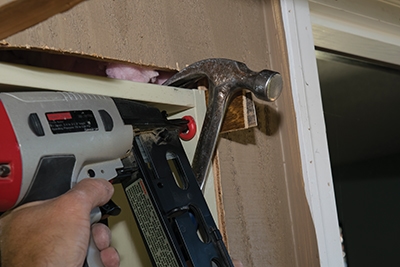 A hammer claw helped pry this corner out to flush as it was being nailed. 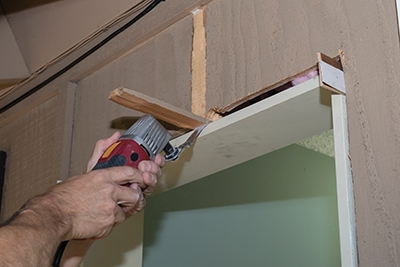 The multi-tool worked great to cut off this thick shim. 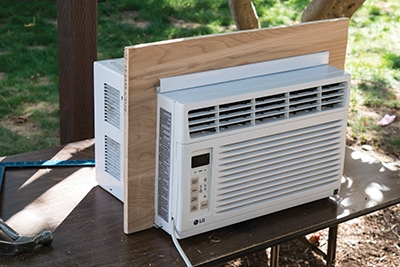 Cut out a piece of plywood first to the size of the opening and then cut it to fit around the window air conditioner. 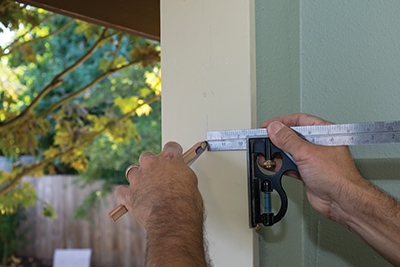 I used a combo square as a gauge to mark the location for the interior stops, which would hold the plywood that fills the gap between the appliance and the jamb box. 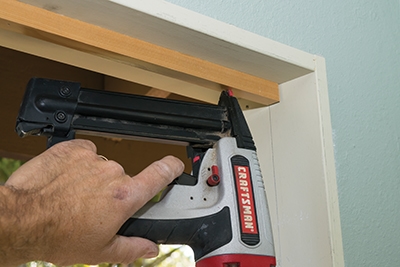 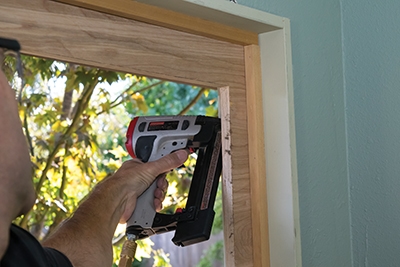 With the first set of stops in place, I put the plywood insert against the stops and nailed it into place before installing a second set of stops on the outside. 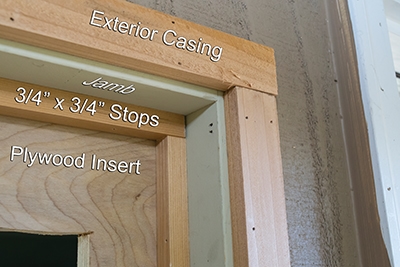 I then cut and installed exterior casing to match a nearby window. 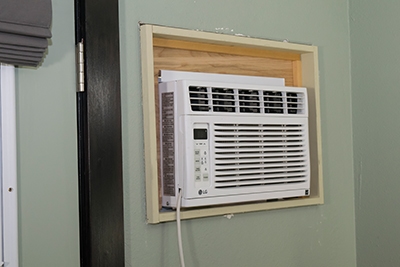 Test-fit the air conditioner before applying caulk and paint. 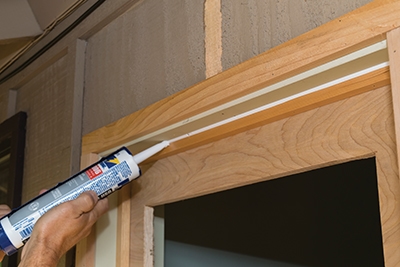 Caulk all of the joints to seal against weather and insects. 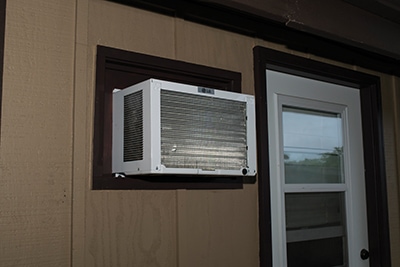 With the trim painted to match the house trim on the exterior, the air conditioner looks much more planned than it does when sticking out of a window. This leaves windows available for fresh air and emergency egress.

I painted the interior surfaces to match the black trim in the bedroom. Black duct tape and black foam strips included in the A/C install kit sealed the small openings around the unit. The trim-less design of the jamb box minimizes the overall impact of the area.