Home » Newest Articles » How To Use A Jigsaw

How To Use A Jigsaw 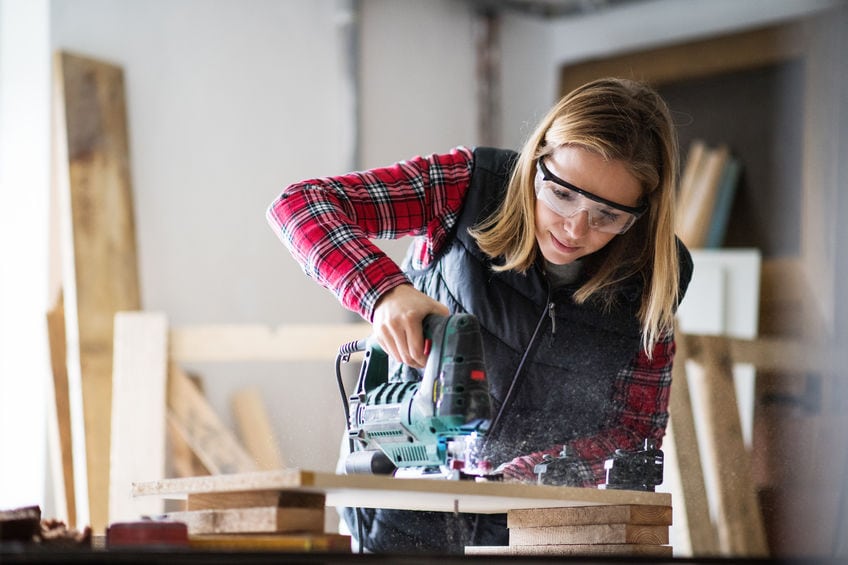 Jigsaws, also called bayonet saws, are the type of tools that get a lot of use in the home workshop. They’re lightweight, easy to use and extremely versatile. To some degree, a jigsaw can perform the duties of a band saw, a scroll saw and even a circular saw. I’ve used jigsaws for all sorts of general applications, such as cutting wallboard and rough-cutting large pieces of plywood and lumber before hauling them to the table saw. But jigsaws are exceptionally great for making tighter, more intricate cuts. The traditional “jigsaw” puzzle, with its tightly curved and complex network of cutout pieces, nicely illustrates the maneuverability of the tool and the detailed cuts that the narrow blade of a jigsaw is capable of achieving. A great saw for both basic home repairs and advanced woodworking, the tool is used to cut curves, holes and scroll work for projects such as cabinets, countertops, furniture, woodcrafts and more.

When shopping for a new jigsaw, focus on the features that will make everyday use a piece of cake and you’ll be happy with the saw for many projects to come. When holding the saw, is it lightweight and well balanced? Is it easy to see the point where the blade meets the wood? This is a critical area when making cuts, and without a clear view you’ll struggle with accuracy.

Most traditional jigsaw models feature D-shaped horizontal handles. However, many newer styles feature “barrel grip” handles, which are palm-sized handles positioned directly above the cutting point of the saw and designed for better balance and control. Handle design is really a matter of personal preference. Many people love the barrel-grip design, but just as many have grown accustom to the more traditional style.

One welcome feature of many modern jigsaws is an easier blade-change system. Changing blades, which used to be an awkward process requiring special tools, now can be done using only dials or switches to release the blade for easy removal. Bosch offers a “One Touch” blade-change system on some of its models that ejects hot or broken blades with the pull of a lever.

Other handy features include variable speed control. On some saws the blade speed, or the number of blade strokes per minute, can be adjusted with a variable speed trigger. A light touch on the trigger produces a slow cutting motion. Pressing harder increases the blade speed and the aggressiveness of the cut.

In some situations the jigsaw can be mounted to a stand and fixed upside-down on a bench. This allows the material to be pushed into the jigsaw, as when using a band saw. The more common method of use, however, is treating the jigsaw as a hand tool, pushing it over the material.

Rule number one for using a jigsaw: Safety comes first. Get to know your owner’s manual and all the safety recommendations specific to your jigsaw.

Rule number two: Let the saw blade do the work. Manual pressure is not going to help the cutting action, and too much forward pressure will reduce the life of the blade and the quality of cut. For basic jigsaw cuts, follow these guidelines:

Standard Vertical Cuts. For vertical cuts, keep the saw’s footplate flush against the cutting surface. You may want to drill a pilot hole for the blade in a scrap section of the material for cuts that are not made from the material’s edge. Start the blade then slowly push the saw forward to penetrate the material. 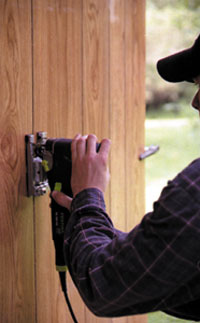 Horizontal (Bench) Cuts. The cutting method is the same, but for horizontal cuts on plywood or other material, make sure the stock is secured to the workbench. Be certain the jigsaw is not going to come into contact with the workbench — or the electrical cord — when making the cuts. 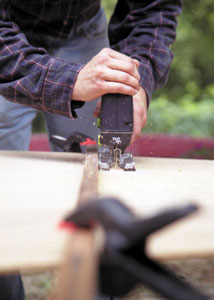 Bevel Cuts. To produce angled or beveled cuts, rotate the footplate by loosening the screw at the bottom of the saw. Many of today’s jigsaws offer an angled cut adjustable to 45 degrees. Adjust the footplate then retighten the screw. Make a test cut to measure the angle’s accuracy before making the actual production cuts. 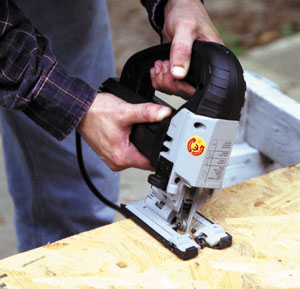 Round or Curved Cuts. When cutting round corners, use a compass to mark the radius. Make exceptionally tight curves by applying one or more straight, tangential cuts. On intricate curved shapes, trace the layout of the cut, and then determine the direction and sequence of your individual cuts before beginning. Make sure all the marked cutting area extends beyond the edge of the workbench.

Plunge Cuts. Hold the saw with both hands and position the front end of the footplate firmly on the work piece. With the blade positioned nearly 90 degrees to the work surface and set for vertical cutting action (not orbital), start the saw and slowly tilt the blade back to a flat position, penetrating the material. However, many users stick with using pilot holes, finding it difficult to achieve accurate plunge cuts.

When strolling the aisles of the local hardware store, you’re likely to find an almost overwhelming assortment of jigsaw blades. To select the right blade, you need to know a few basic facts. What type of material do you plan to cut — wood, metal, plastic or other? What type of cuts will you be making — tight cuts, rough cuts, scrolling or a combination?

Easing the selection process, most jigsaw blades from companies such as DeWalt, Blu-Mol and Bosch indicate the blades’ recommended material applications right on the package.

One of the most important things to consider is the number of blade teeth per inch. Most woodcutting blades have as many as 12 teeth per inch, while metal-cutting blades may have up to 36. Generally speaking, the fewer the teeth, the faster the blade will cut. However, blades with fewer teeth also mean a rougher cut.

The material’s thickness is another point to consider when choosing blades. As a rule of thumb, at least three blade teeth should be simultaneously cutting the material at all times. This means thinner materials should be cut with a blade with finer teeth.

Also be sure the style of blade you select is compatible with your jigsaw. Some saws accept T-style blades while others accept “universal” blades. Some saws will accept either type of blade. Keep in mind that there is a lot of overlap among jigsaw blades and it’s not necessary to change blades with every job. Some blades may be specified for a certain application, but in a pinch they may work fine for cutting that 2-by-4 lying across your bench. Specialty blades are also available for applications such as cutting against an obstruction or cutting leather, foam rubber or vinyl.

Thanks to today’s innovations, jigsaws are easier to master than ever. With a little shopping, a little practice and the right blade you’ll find uses for a jigsaw around every corner of your home. 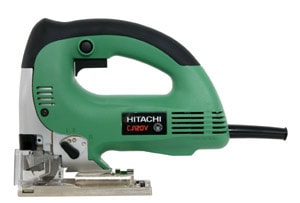 • Use waste material to your advantage. Waste areas allow room to move the saw and approach a difficult cut from a new angle.

• For a narrow, rectangular cutout, make several straight cuts at gradually widening angles up to the adjacent cross-angle of the rectangle, until you’ve achieved an opening large enough to turn the blade around.

• To minimize splintering, cut along the grain of the wood as much as possible. When cutting laminated materials, mask the cut lines with tape to minimize chipping.

• Prevent cutout sections from splintering at the final cut by securing a C-clamp over the previously cut areas, holding the cutout piece in place.