Commercial Blower Review, Gone with the Wind, We Test the Most Powerful Leaf Blowers 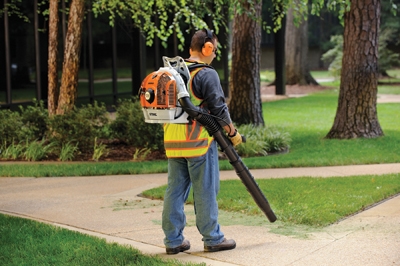 Whether you own a commercial lawn service or are a landowner looking to blow away the competition, any of these units will do the job. We looked at five of the most popular and powerful backpack blowers available, Stihl’s Magnum BR-600, Husqvarna’s 380 BFS, RedMax’s EBZ 7150, Echo’s PB-770T and Shindaiwa’s EB854. With the exception of the RedMax, these units are the respective companies’ top-of-the-line blower. RedMax’s 8050 series was back-ordered and unavailable for testing. For commercial use testing, units were supplied to a local town’s parks and recreation department; and for landowner testing, the units were used on a suburban estate of five acres, with two acres of lawn and outdoor living areas. Manufacturer’s technical specifications are included for comparison. Features common to all units are cruise control, remote throttle, either stick or tube mounted, commercial warranties, rigid backpack frames and positive-lock adjustable tube systems. Stihl’s BR-600 was the lightest of the units tested and for smaller framed testers, its light weight drew rave reviews. Even though the BR-600 appears diminutive, don’t let its size fool you. Stihl’s BR-600 performed as well as the larger units. Stihl obviously spent time designing its backpack to mimic features found on backpack frames used by mountaineers and backpackers. With the addition of a hip belt, the Stihl Magnum could distance itself further from the competition when it comes to the weight factor. The parks and recreation department that performed our commercial test were already using a variety of Stihl blowers with its most powerful unit being a recently purchased 550 model, but when the BR-600 Magnum showed up, everyone wanted to use it for its additional power. Whoever got the BR-600 finished faster and could rest in the shade waiting on the others to finish. The Stihl Magnum, according to the EPA’s website, has the lowest emissions in its class. www.stihl.com Husqvarna’s 380 BFS excelled at handling wet, sloppy stuff. When it came to moving a compost pile of leaves, once the dry material on top was removed and the wet leaf mold was exposed, Husqvarna’s 380 kept moving material. Another Husqvarna highlight was the 380’s ability to blow hardened clay from a driveway. Traffic had pressed the clay firmly to the concrete, but the Husqvarna simply lifted it and it was gone. Unfortunately, we couldn’t find more clay samples to test the other units on, but we were impressed by the Husqvarna’s performance. The 380 BFS includes a hip belt, which transfers the weight of the machine onto the hips and off the shoulders. The Husqvarna is a larger unit, just under 30 pounds, but the hip belt alleviates the weight, and the performance is worth the additional weight. www.husqvarna.com Shindaiwa’s EB-854 is part of the H4 family of hybrids, using 4-stroke engines that burn a fuel-oil mixture. The result is a cleaner and more efficient engine that is not susceptible to engine failure due to loss of oil pressure, as the oil is already in the fuel mixture. The EB-854 handled the compost pile test with no problem, either. The Shindaiwa was the one unit our commercial testers had not yet seen and were excited to finally get their hands on. EHT is located in the Southeast U.S., and although Shindaiwa’s blowers are commonplace in other areas of the country, they are not as common here. The EB-854 did not disappoint. Shindaiwa incorporated two features to protect the engine from damage due to intake clogging, one is a pre-filter intake cover and an engine overheat kill switch that shuts down the engine if it overheats. We had no problems with the unit clogging in its three months of testing. The EB-854 also has a quiet mode that allows the unit to be operated at a lower decibel unit in areas that are noise sensitive. The Shindaiwa is a powerful unit, and if noise is an issue for you or your company, then the hush feature alone should make it worthy of your consideration. Also, the Shindaiwa was one of two units that has a ground wire running from its frame through the tube to disperse static electricity buildup. Once you have been shocked, you will understand the value of this feature. www.shindaiwa.com The Echo PB-770 shares many of the design elements and features of Shindaiwa’s 854 Model. The PB-770 has a leaf guard incorporated into its design to prevent debris from clogging the intake and damaging the motor. Both the commercial and the landowner testers gave high marks to Echo for incorporating an active ventilation system that supplies fresh air to the back of the user. In our unbearably hot summers here, this feature cannot be overemphasized. Since blowers are used here more in the summers to remove grass clippings than they are in the fall to remove leaves, keeping the operator cool is a nice design feature of the PB-770. The Echo engine has a different pitch than the other tested units. Some users preferred it, others didn’t and some didn’t even notice until side-by-side tests were done. It seems a lot of attention has been paid to this on the internet lawn sites. Our thoughts are, if it runs like a scalded dog, we don’t really care. Echo’s ProFire ignition made starting easy, and our testers liked this. www.echo-usa.com RedMax’s 7150 may not be the biggest dog on the porch, but we don’t see many lining up to chase him off. The 7150 was the only unit tested that was not the flagship model of its respective company. The 8050 model is RedMax’s largest, most powerful unit. That being said, the RedMax 7150’s performance makes it a viable choice for any commercial operation or landowner.

In our compost pile test, the 7150’s performance almost equaled the Husqvarna 380 BFS and Shindaiwa’s EB-854. That alone was impressive enough for us. But like the Echo, the RedMax features a fresh air feature to keep its operators cool when the going gets hot. The RedMax also featured a hip-mounted stick throttle on its left side, a feature I preferred, but others thought the tube-mounted throttle location was better. RedMax makes no pretense about catering to consumers, and its products definitely reflect a built-to-take-abuse look. www.redmax.com

From a performance standpoint, all of these units are at the top of the food chain. Our commercial testers remarked that each of these units out performed the current models they were using and there were no unit maintenance problems in our season of testing. Smaller framed testers liked the Stihl for its combination of lightweight and power, but when the Husqvarna’s hip belt was adjusted correctly they could easily manage its larger size. The Shindaiwa and Echo models performed so well that the department head of the Parks and Recreation said he would be comfortable purchasing these brands, even though his department had not used these brands before. This is high praise as the city’s shop contains a mix of Stihl, Husqvarna and RedMax products already.

As you can see from the specifications chart, all of these units produce massive amounts of CFM, and we feel this is a truer test of absolute power. But what becomes of that power has everything to do with tube and nozzle configurations. You may have seen groundskeepers with nozzles flattened to increase velocity. None of the tested units would require this type of modification to perform any blowing tasks encountered. Bottom line, if you feel the need to strap a jet engine to your back, these models are for you.

The increased power should result in faster finish times for both commercial and landowners. For commercial use, a faster job completion means more profits and for the landowner it means more time to pursue other interests.

For more on these blowers see Extreme How-To’s blog at http://blog.extremehowto.com.