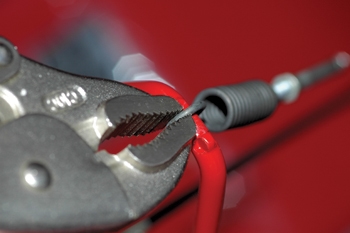 It’s a good thing we can depend on pliers and wrenches, otherwise people would have a heck of a time taking things apart and putting them back together. From needle-nose pliers for work in tight spaces to wire cutters and specialized fence-building tools, lever-action pliers presents a broad category for review in a tool column. The same goes for wrenches, which include the standard box-end style to the newer ratcheting wrenches. This article will assume that EHT readers know the basics of these tools and instead focus on advances in the design of adjustable pliers and wrenches.

Groovy Channeled pliers—also called pump pliers—were invented in 1933 by Howard Manning, chief engineer of Champion-DeArment Tool Company. The tool’s tongue-and-groove, slip-joint style adjustability introduced the concept of multiple gripping positions from a single tool, and it proved to be a watershed year for the company. Manning dubbed the pliers “Channellock,” and Champion-DeArment immediately applied for trademark protection for the name and for a patent of the concept. By 1963, the word “Channellock” was so synonymous with grooved pliers that the company changed its name to Channellock, Inc. Today, Channellock has more than 4,000 wholesale and retail customers in the United States, and ships to 45 countries around the globe. 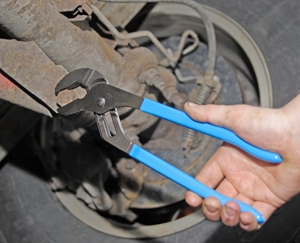 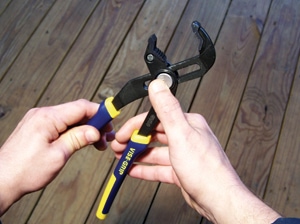 Irwin’s GrooveLock Pliers adjust with a push button. Over the years a variety of manufacturers have introduced grooved pliers that borrow from the Channellock concept. One new enhancement comes from Irwin’s GrooveLock pliers. Designed to adjust 50-percent faster than traditional grooved pliers, the GrooveLock tool utilizes a button at the plier hinge, which the user simply presses to unlock the tool and slide the jaws to the appropriate width. Release the button to lock the jaws in place. Once locked, the jaws won’t slip out of joint until you press the button again. The multi-groove ratcheting system also has twice the positions of traditional channeled pliers. Plus, the “all purpose” jaws are designed to grip flat, round, hex and square work pieces. Another new concept comes from LockJaw, which offers fully automatic self-adjusting grooved pliers. There is no adjusting on the part of the user; the pliers do it for you as soon as you grip the workpiece for simple one-handed operation. This is achieved by employing a spring-loaded mechanism in the grooved hinge. 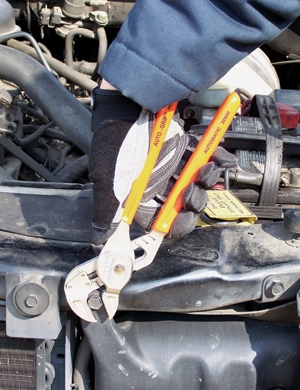 LockJaw’s Auto-Grip channeled pliers adjust automatically using a spring-loaded hinge. Between the two new concepts, LockJaw wins in the speed-of-adjustment category. However, I prefer the wide, angled jaw design of the Irwin model. And, although there are tons of jobs where LockJaw’s self-adjusting model would save time, its hinge design is bulkier and the jaws aren’t wide enough to be flush with the side of the hinge. This means that grabbing a short fastener when working adjacent to an obstruction, like turning a nut in the middle of a sheet of plywood, can be a little tougher for the Auto-Grip. But both tools definitely have their advantages.

Locking Pliers The original locking pliers were invented in the 1920’s by a blacksmith named William Petersen. He realized his job would be a lot easier if he had a set of pliers that would clamp down and hold the piece of metal he was working on “in a vise-like grip.” Peterson designed a screw mechanism in the handle of pliers that could adjust the opening of the pliers, as well as a device in the second handle to lock it in place. He started selling the Vise-Grip Pliers out of the trunk of his car to farmers and mechanics in the surrounding towns. In the 1950’s, the easy release lever was added to the pliers and the company incorporated. The company is now known as Irwin Industrial Tools. Today, Irwin’s Vise-Grips come in a variety of styles, some with curved jaws, some with bent noses, others with straight jaws or C-clamps. 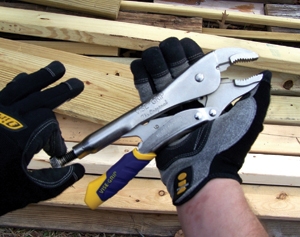 Irwin’s original Vise-Grip locking pliers utilize a knob at the end of the handle to adjust jaw width. Locking pliers are also manufactured by Cooper Hand Tools and LockJaw. The design of the LockJaw Auto-Grip locking pliers puts a new spin on the traditional concept. First, there’s the easy-release lever. Although many new models of locking pliers have a quick-release feature, some of these mechanisms actually seem too easy to release. So, if you’re as clumsy as I am, you might inadvertently bump the pliers, release the lever and have to re-apply the pliers. The LockJaw, model has the lever housed inside the handle, and it requires just enough pressure that I found it less likely to accidentally release. Secondly, the LockJaw model offers “Set and Forget” clamp pressure—and this is really cool. Rather than employing the standard end-of-handle adjustment nut, you can dial in clamp pressure from the middle of the tool and the pliers automatically adjust as needed. Grab a thick inch-wide nut or a small 1/4-inch piece, and the pliers will lock securely without requiring adjustment. This is a very nice time-saving feature when compared to standard locking pliers, which require incremental adjustments when grabbing work pieces of different widths. 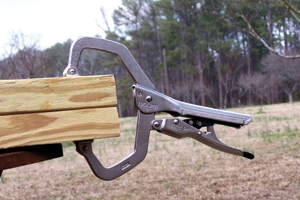 Easier Adjustments Adjustable-end wrenches are sometimes generically referred to as Crescent wrenches. However, “Crescent” is actually the brand name of an improved version of the adjustable-end wrench developed by the Crescent Tool and Horseshoe Company. New developments in adjustable wrenches have manufacturers looking beyond the traditional thumb-operated threaded knurl, which requires you to manually spin the adjustment device to set the jaw width. Although the traditional method is tried and true, it’s also somewhat time-consuming. Now, Crescent and Irwin both offer slide-adjustment mechanisms; just press a button, slide the jaws to the desired position and release the button to lock them in place. These slide adjustable wrenches are undoubtedly much faster to use than traditional knurled models, and both manufacturers also print incremental measurements right on the jaws so you can easily see what the gripping width is. 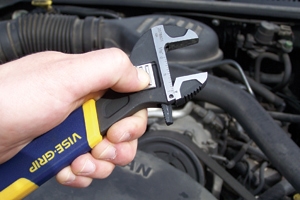 Irwin’s Vise-Grip adjustable wrench does away with the thumb-operated threaded knurl in favor of a button. The Crescent brand RapidSlide wrench has the slide adjuster in the handle. Irwin’s Vise Grip Quick Adjusting Wrench has the adjuster in the head of the tool, where the thumb roller is traditionally located. As far as slide location, I prefer the Irwin design because there’s no risk of my hand inadvertently interfering with the adjuster. The Irwin version locks in place more securely. With the Crescent version having the slide on the handle, I kept bumping into it and changing the setting. However, there is also a drawback to the Irwin design: The Irwin wrench can’t adjust infinitely like the conventional threaded knurl style. This is because the slides lock in place against metal teeth, which in the case of SAE pliers is every 1/16 inch. To use an Irwin SAE slide-adjustment wrench on a metric fastener, you’ll have some unwanted slop in the grip. So if you’re relying on the Irwin as your wrench of choice, you’ll need to invest in both a metric and a standard version. On the other hand, the Crescent RapidSlide can be used for both.

More Clever Levers I’ll wrap this up with a few other highlights, such as Channellock’s trend toward bigger jaw widths on traditionally smaller tools. For big grips in small areas, Channellock is offering the Code Blue line of short-handled wrenches with extra wide jaw capacities. For example, Channelock’s 6WCB offers a jaw capacity of 1.34 inches and the wrench is only 6-1/4 inches long. The Code Blue wrenches rely on the traditional threaded knurls, and both metric and SAE measurements are conveniently printed on either side of the tool. 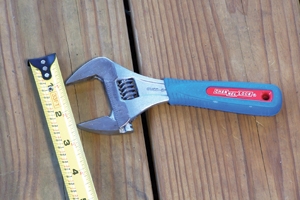 Channellock’s Code Blue line of wrenches offers large jaw capacities and short handles. Another interesting design comes from Loggerhead Tools’ Bionic Wrench. Available in a variety of sizes and capacities, our test unit was the 8-inch-long version that easily adjusts to fit any bolt or nut from 7/16 to 1 inch (or 11 to 20 millimeters). Just squeeze the handle and six piston-like steel levers close inward to grab the nut. This provides equal distribution of force across the flats so you don’t strip the fastener. 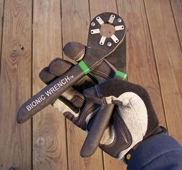 The Bionic Wrench uses six piston-like levers to close inward to grab the fastener. Next, there’s the new Crescent R2 RapidRench, which is an adjustable ratcheting socket wrench. It has a wide jaw capacity to replace 38 of the most popular size sockets. And, because the jaws have an open, two-sided design, rather than a round and enclosed shape like sockets, the tool can be used on flat fasteners such as wing nuts and eye-hooks. 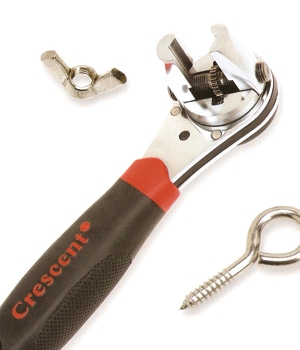