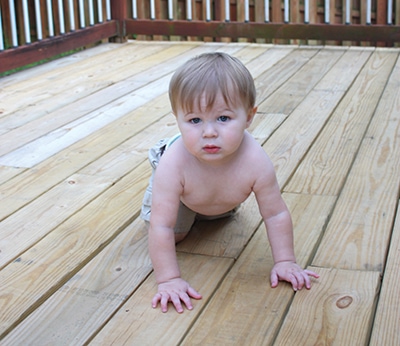 Quality treated wood and a hidden-fastener system give an old deck a facelift.

When it came time to replace some rotted deck boards on a recent project, we chose to use high-quality, Above-Ground treated lumber and a hidden-fastener system to achieve a smooth nail-free surface that’s rot-resistant and friendly to bare feet. Here’s how we took out the old boards and put in the new ones for a durable deck surface that will last for years.

The deck for this project was built with a floor of 2x treated lumber. For the replacement decking, we used Ecolife™ Stabilized Weather-Resistant Wood from Sunbelt Forest Products, which has an innovative wood-stabilizing preservative that protects the natural beauty of Above-Ground exterior wood from weathering, termite attack and decay. Ecolife’s built-in water repellency is pressure-treated throughout the wood making the lumber more stable, with up to 50 percent less surface cracking and checking as compared to ordinary treated wood.

These important preservative features, combined with the routine maintenance of a quality stain/sealer, should eliminate the need to replace the deck boards again in the near future.

Another step toward board longevity—as well as good looks—is the use of a hidden fastener system. By avoiding holes driven into the top face of the boards, you avoid splits in the grain and creating all those points of entry for rain water, which could contribute to rot.

A fastener-free deck floor also appears more uniform and provides a smoother walking surface (or crawling surface, if you have young kids).

A number of hidden-fastener systems are available for decking, but we chose the Shadoe Track System for this deck because it utilizes a hidden joist-mounted system, rather than fasteners placed between the deck boards (which can sometimes be noticeable). It’s important to note, however, that to use this particular system the deck must be elevated far enough above the ground to access the joists and allow working room beneath the deck boards (shadoetrack.com).

Out with the Old

For some folks, the prospect of demolishing a deck surface might sound like a grueling job. Not me. We’ve got a monster deck-demolishing pry bar called The Gutster that forks between floor boards and leverages over the joists to pluck those nailed boards right off the framing with surprisingly little effort. This tool even has some nail-puller slots built into the head—and they actually work. I use it often and enthusiastically for demolition work. The Gutster comes in a few different sizes, |but I’m six feet tall and prefer the long-handle model for floor-level jobs because it grants tall users better back-saving leverage.

The resulting pile of waste might be an issue for some homeowners, and depending on the size of your deck it may require you to rent a dumpster. Luckily, we had a pickup truck to haul loads of old deck boards to the street curb, and we were working in a city that offered a weekly waste-disposal service. Once a week the city’s crane-truck would patrol the streets to pick up downed tree limbs, discarded furniture or construction waste for transport to a landfill. Demolition cleanup doesn’t get much more convenient than that!

With the flooring removed, inspect the deck’s structural framing. Make sure all connections are solid and there is no significant rot, that everything is stable, and that no joists have sagged. Address any unresolved issues before installing new deck boards.

Also, take the opportunity to address any construction issues the original builder may have overlooked. For example, this was a freestanding cantilevered deck, and the joists on one end ran “wild” over a beam and had no blocking between them. When blocking is fastened between the joist ends it prevents the joists from twisting. If the joists twist then the level decking surface will be compromised. So, with the deck boards out of the way, we decided to add blocking between joist ends before covering them again.

To install the system, align the Shadoe Track galv/vinyl-coated sections along each joist so their center ridge rests flush against the wood and the trough is oriented downward like a “V”. The bottom of the trough features weep holes to allow drainage during rainy weather. Nail the Shadoe Track through the mounting holes and into the tops of the joists. The manufacturer recommends using the 2-in. galvanized ring-shank nails that are included in the kit. Continue installation to cover all lineal feet of the deck joists.

In some cases you may need to cut the metal tracks, and this can easily be done with a pair of tin snips.

As you would with any deck project, begin laying the boards at one corner and stagger the end joints between rows. Check the growth rings on the ends of the boards to determine the “bark side” of the board, and place that side facing upward to reduce cupping and to facilitate drainage.

Treated lumber usually shrinks over time as it dries, so we install the boards tightly together with no visible gaps at the sides. When the boards shrink slightly, the gaps will open and allow better drainage. If you “pre-gap” treated lumber, then sometimes the spaces between boards can appear too wide after the lumber dries.

To fasten the boards, drive screws at an angle through the lower Shadoe Track mounting holes and into the underside of the deck boards. Use at least two screws at each joist-to-decking intersection. The manufacturer recommends using the 1-1/4-in. coated Tru-Hold screws that are included with each package.

Where the ends of two deck boards butt together over a joist, the Shadoe Track can be reversed so you can fasten both ends of the splice from below. Alternatively, you can place scrap blocking just long enough to bridge across the spliced board and two adjacent deck boards, then drive screws through the block and into the underside of the decking to cinch down the middle board. The length of your screws will depend on the thickness of your blocking and decking material, but be sure the fasteners aren’t long enough to penetrate the deck surface.

For standard installations, we usually like to adjust the decking with a board-straightening tool like the Hardwood Wrench. For this project, however, the Shadoe Track channels didn’t fit our go-to tool, so we took a different approach: using clamps to straighten bowed boards.

The Ecolife boards weren’t badly bowed, but even 1/4 inch can create an unsightly gap, and the spacing issues can accumulate and worsen throughout the installation if you don’t address every row of boards. We used a combination of long bar clamp and pipe clamps, anchoring one end against the deck’s fascia board and pinching the other end against a problem board until it straightened. As we progressed we would clamp several boards together at a time and fasten them all at once from below.

But what if your deck is bigger than your clamps? We were rebuilding a 12-by-40-ft. deck, and most people don’t have 12-ft. clamps laying around. Our solution was to occasionally leave one of the deck boards loose at a strategic location. The board in question would have been gang-clamped with the others, but we left it unscrewed. As the new deck floor moved further from the fascia board and the clamps could no longer reach it, we would pry up our special loose board to grant clamp access to our newly fastened decking. This gave us a strong foothold to anchor one end of the clamp at a closer location, and granted greater reach to the other side of the soon-to-be-installed boards.

Note: For the final few deck boards, we reconfigured our bar clamps as spreaders, and rather than pulling the boards together to straighten them, we pushed off the joist-end blocking to straighten the rows.

Whether you’re a professional deck-builder or DIY’er, most of us aren’t accustomed to working underneath a deck. Whenever we had enough room, we used a rolling shop stool beneath the deck so we could fasten the boards from a seated position. This is much more comfortable than squatting on your haunches. The stool swivels for easy movement, it’s lightweight and it rolls, plus a tool tray at the bottom can hold fasteners, sunglasses and a beverage.

In lower-to-ground areas where a shop stool won’t fit, we recommend supporting your weight with one arm draped over a joist while you fasten the nearest board.

During installation, we at first found it tricky to guide the screws into the Shadoe Track holes when fastening the decking. To make this easier, we arrived on the following tool setup: First, an impact driver will afford better control than a standard drill/driver. Use a long extension for your bit-holder for easier reach into the corner beneath the deck boards. And finally, use a bit holder with a sliding collar than can hold the screw straight while you insert it into the screw hole. After we adopted this procedure, our speed of installation increased dramatically.

Once the project was completed, we got exactly what we wanted: a smooth, uniform, fastener-free deck surface that will stand the test of time. Mission accomplished. Time to crack a cold one. 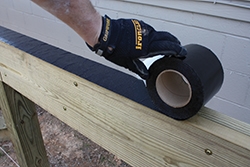 When this deck was originally constructed the tops of the joists were lined with deck flashing—the black strips shown on the tops of the beams and the joists. This is a commonly overlooked step, but a great way to prevent accumulation of water that can lead to rot and overall weakening of the construction. Deck Flash Barrier from Cofair Products comes in rolls, either 2 or 4 inches wide, which you roll out just like duct tape over the tops of the joists. The product is a self-adhesive asphalt mastic that creates a waterproof membrane and self-seals around screws and nails, blocking a primary pathway for water infiltration into deck joists. Visit www.cofair.com. 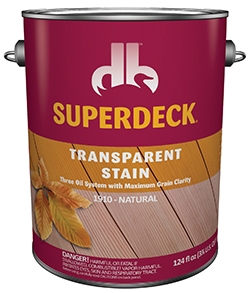 SuperDeck Transparent Wood Stain was developed more than 20 years ago to meet the demands of the extreme climates found in California. From the highest peaks of the Sierra Nevada mountains to the low and damp northern coastlines to the dry heat of the valleys and deserts, Superdeck is a consumer and contractor favorite due to its ease of use and long-lasting results. The oil-based formula penetrates deep into wood fibers for years of enjoyment and protection against the elements in any climate. Superdeck is formulated to resist growth of mildew and algae on the coating’s surface. The three-oil formula repels water, just like water off a duck’s back. The easy-to-apply, one-coat coverage lubricates wood fibers to reduce cracking and checking, and the product is VOC-compliant with formulas as low as 100 VOC. The transparent finish highlights the natural wood grain, and iron-oxide pigments provide maximum UV protection. Visit www.superdeck.com. 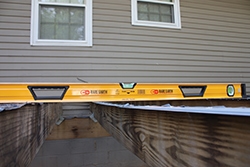 Our failure here was not determining the joist in the middle sagged until we had already fastened the metal track to it. We should have first have run a string-line across the tops of the all joists to make sure they were all level in the same plane. We found this one a little late. The substantial sag required us to remove the joist and completely replace it before installing the new deck boards.