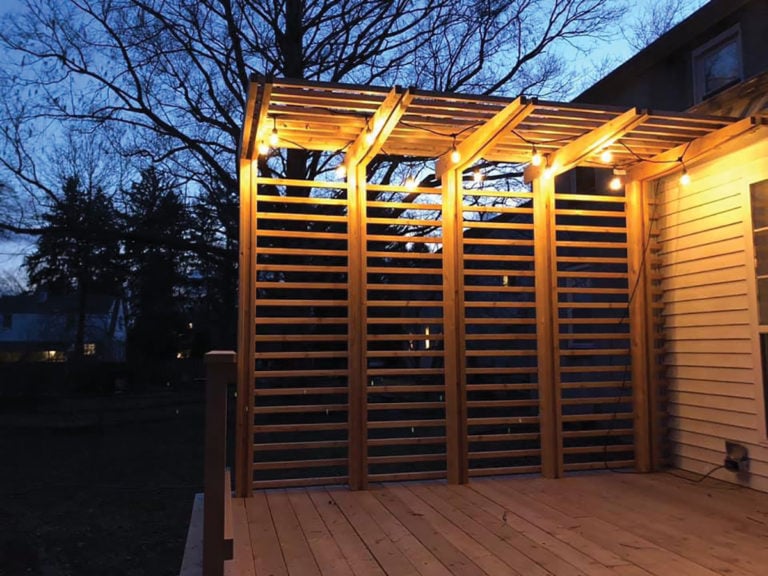 Make a deck guard rail into a shade-throwing thing of DIY beauty. 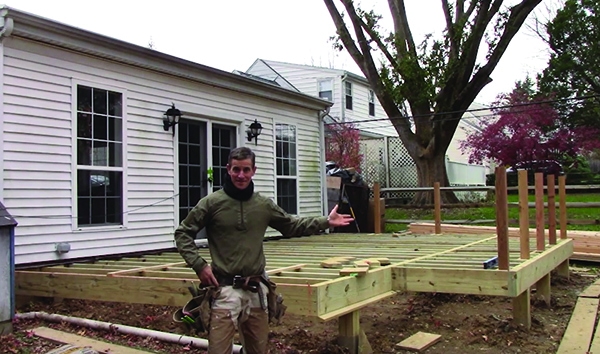 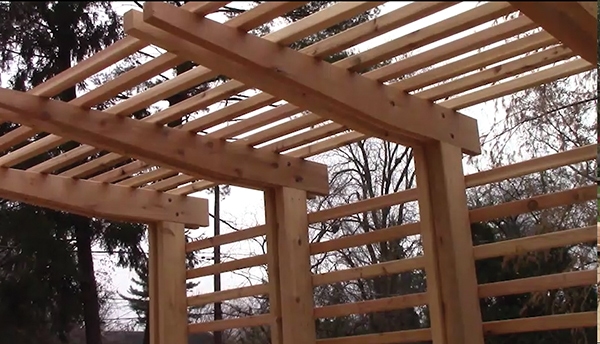 Your deck’s guard rails don’t have to just be guard rails. They can be dialed-in, detailed, designed. They can be elements that create space and place. I don’t want to get too woo-woo on the design-y stuff, but there’s more than a little merit to it as I saw come to life in this project.

Nevertheless, the design needs to live in the world and across time. So, in addition to the cedar posts, rails, rafters and cladding, the keystone that carries the arch (so to speak) are the fasteners, namely the structural screws and their placement in the frame and the finish. We’ll get to that below.

In the meantime, the road to Pergs-gard starts with the framed deck. Here’s how I crossed the Rainbow Bridge. (Too deep on the Thor references here? I might consider getting some kind of social life…)

The awesomeness of the shade structure starts after framing is completed. The first step after that is to straighten the outside band joist—and keep it that way during assembly. I do this with what I call “bridge boards;” basically 4-foot scraps screwed to interior joists. To make sure the band is straight, I run a string along the top corner from end to end and nudge the band as needed. Once straight, I fasten the bridge boards to it, and it’s held fast. 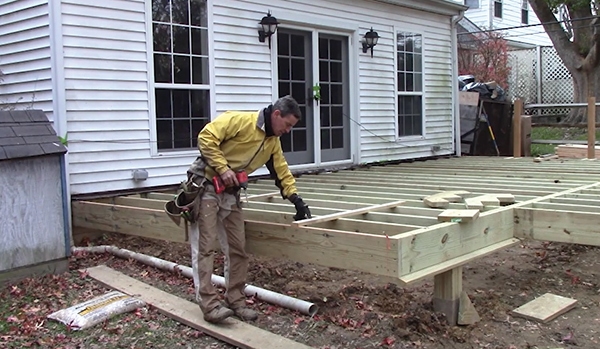 Note: I know some contractors complain about using pressure-treated lumber, but what my lumberyard calls “#2 wet” is nearly arrow-straight. Every. Single. Board. Crowning them is all but a waste of time, because they’re dead-on. Thicknesses can vary, but this is only an issue when using composite decking. If the lumber undulates at all, the reflective surface of composites can be noticeable (not an issue with wood decking).

With the band straight, I fasten 2×10 blocks to the underside of the joist. These serve to “bottom out” the post when I install it. A clamp makes it easier to install alone. The reason my hands are outstretched in the photo is because the snowflakes that were falling were so big, they practically made noise when they hit the ground and they were extra beautiful. 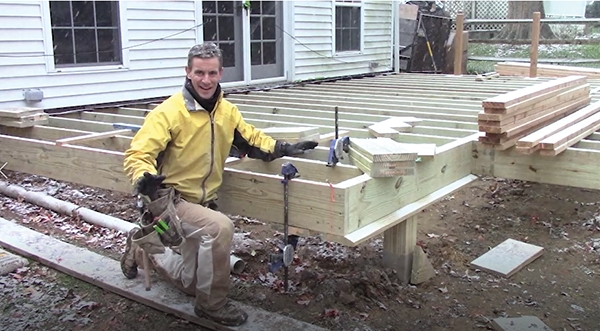 To fasten the bottom block to the interior joist, I pre-drilled some pilot holes with my countersink bit and blew some 3-in. screws in there. 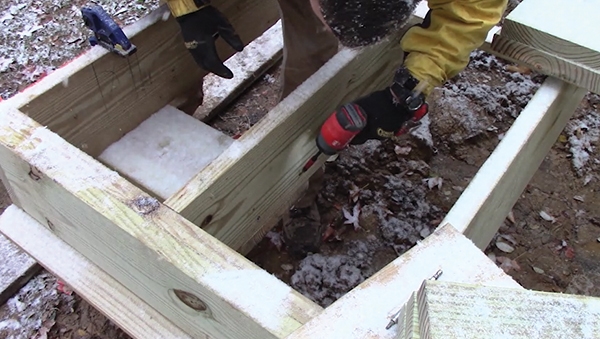 I used my patented* (*not patented, but I’m pretty sure I invented this) built-up posts—a 3-ply assembly of 2×6-2×4-2×6—to create a strong, inexpensive and very stable post. Both my client and I really dig the shadow lines, texture and unique look. 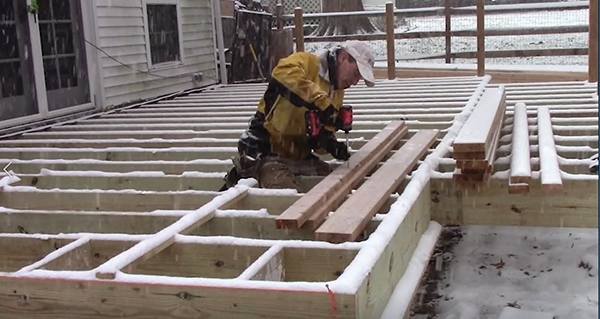 To get the 2×4 ply centered easily on the 2×6 ply, I start by making an inch-wide gauge block from a scrap of 2-by. Flush up the bottoms, then run the block on the 2×4 and flush it up with the edge of the 2×6. Fasten with 2-1/2-in. stainless steel Spax trim head deck screws. 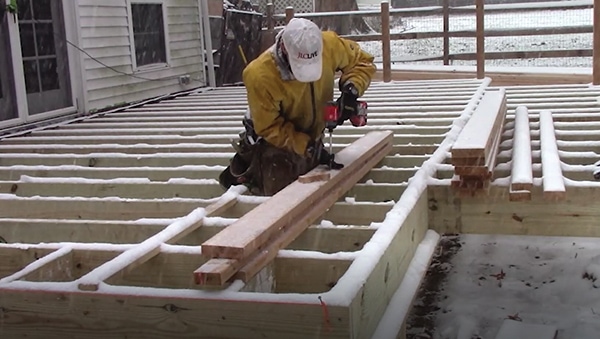 For the third ply of the built-up posts, apply the second 2×6 to the 2×4. Use the block again and fasten.

The secret in the structural sauce here is 2×10 blocking between the joists. 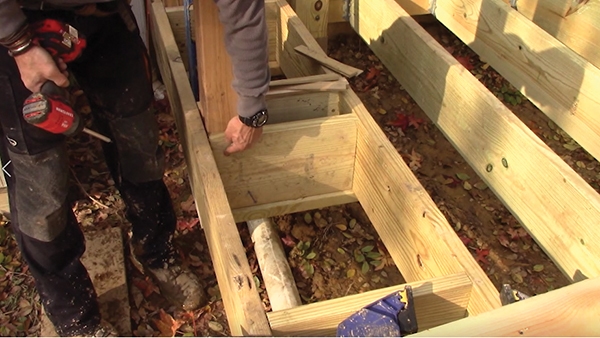 Basically, I build a harness around the post with 2×10. I start with the blocks that go between the joists, setting them while the post rests on the post-base installed earlier. I shim as necessary. Then, with the post dead-on plumb, I install blocking between the cross-joist blocking. 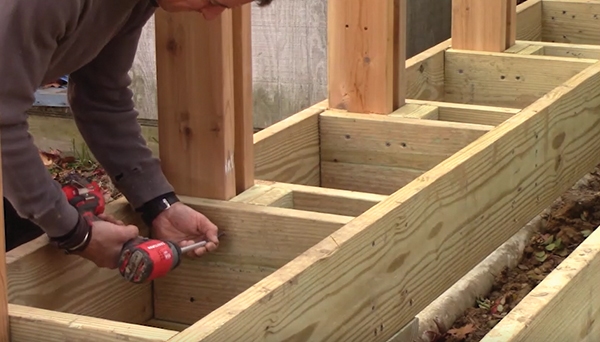 I then freeze everything with #10 x 3-in. deck screws (my preference is Spax HCRx-coated). We’ll come back later and replace these screws with 5/16 x 6-inch Spax Power Lags. 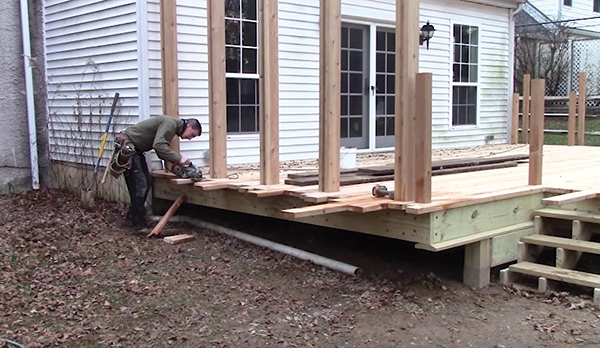 To make sure I have room to saw them evenly—and so they balance with the cladding installed later—I overhang the first three deck boards 2 inches past the band joist and install to finished length (this is another reason to get the outside band nice and straight with the bridge boards). I run the rest of the deck boards all snaggletooth. Once they’re all installed, I snap a line between them and cut in place. I love doing this. Ready. Set-y. Go Get-y. 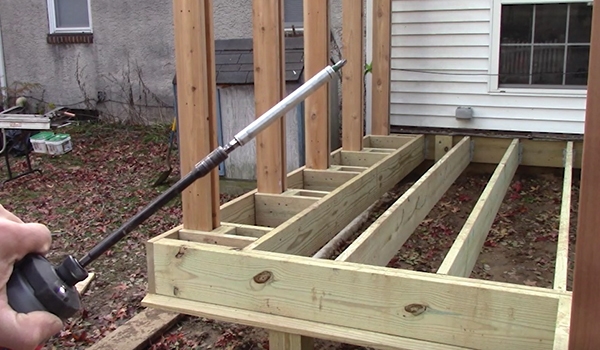 Leaving 2 inches also enables me to get the saw’s deck to pass the posts cleanly with a little room to spare.

If you have an obstruction that impedes you from getting your driver near the fastener, try adding a bit holder to your bit holder.

Cut the taper off your rafters with a circ saw. 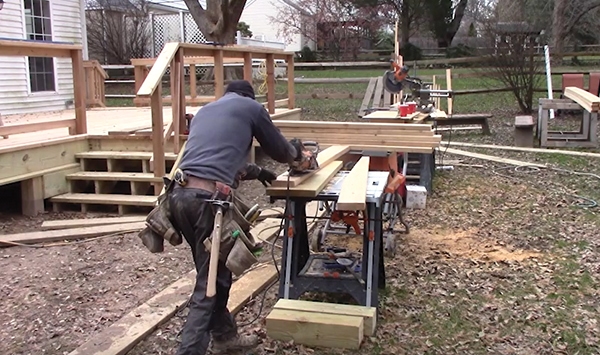 Like post height, there are no rules for this other than your sense of proportion. On these 5-ft. rafters, I left 16 inches flat to integrate with the post and cantilever off the back, before starting the taper. The rafter tapers from 5-½ inches to 2 inches and the end of the board. After I cut the first rafter, I use the cut-off as a pattern for the remaining rafters. 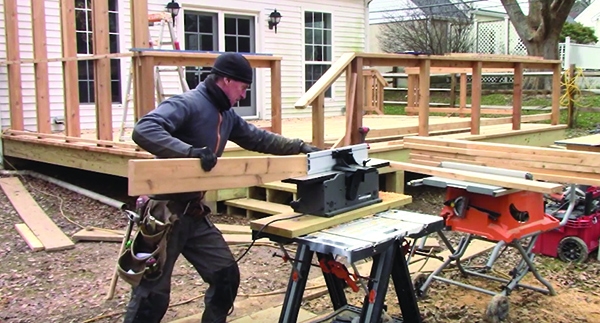 Also, check the boards before cutting. If there’s some crappy lumber-band mark, gouge, scrape from the lumberyard goons or stain—and I had plenty on this order—position the unit so you can cut that off or bury it on the inside face of the rafter.

To erase the saw marks on the taper cut, I cleaned them up with my Porter-Cable benchtop jointer. It made the cut super-flat and sucked out all the blade marks. It’s a detail, but I love it.

The rafters really need to be installed uniformly. Making accurate, repeatable layout marks are the keys to that castle. 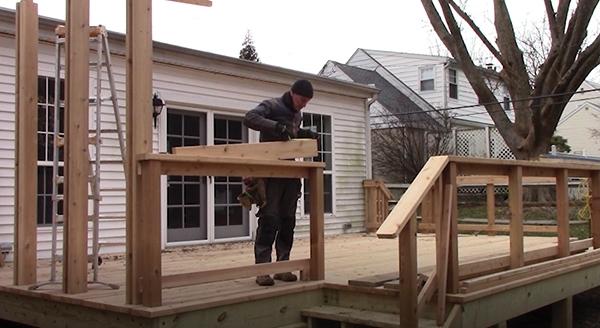 I used a tape, layout square and combination square to get every piece uniform. A critical layout location is the Power Lag locations. They need to bite into the 2×4 center ply. I use my top-left/bottom right rule too.

Top left/bottom right means that when I install the fasteners, the top one is oriented to the left side of the board and the bottom to the right. That way, when I install the screws from the opposite side they can’t run into each other.

Also, I want them all in the same exact place on each post, so I laid those marks out carefully with my combination square. 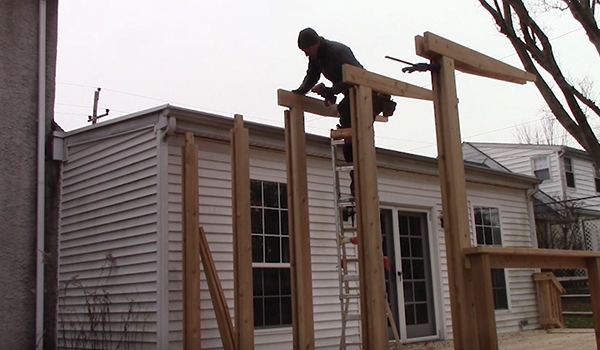 To get the rafters installed, I found the best way to get them on layout and to have my body in a suitable position to drive the #10s was to use my Little Giant articulating ladder. I extended it to get on top of the post and leaned—leaned it … love this thing—inward to optimize body position.

Then, I squared up the rafter to the post and fastened.

The horizontal cladding for the shade structure is cedar 2×4 ripped in half on the table saw, which leaves it 1-1/2 in. x 1-11/16 or so. Again, I cleaned up the saw marks on the jointer. To recreate the factory bullnoze, I hit the squared-up edges with a round-over bit on the router. I installed them with the 1-1/2-in. face to the post. 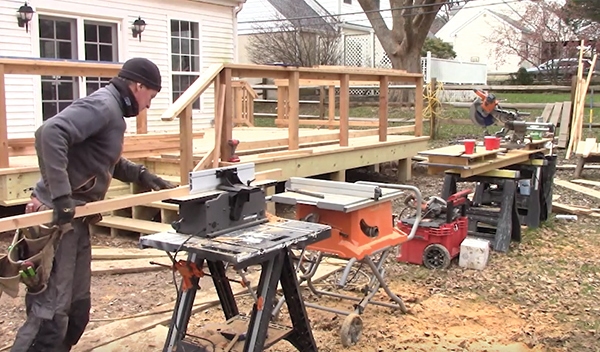 After marking my layout for the horizontal cladding at 5-in. on-center along the outside of the posts, I installed a piece near the guardrail height. Before installing any more cladding, I re-check the posts for plumb just to be sure nothing moved.

Because time is passing.

Any under-supported wood can move or twist. So the time to learn if that happened is before you drive a billion screws into it. Ergo: I take the ole whiskey to it. In case nobody knows what I’m talking about (not uncommon), level vials used to have alcohol in them to keep them from freezing, hence “whiskey sticks.” 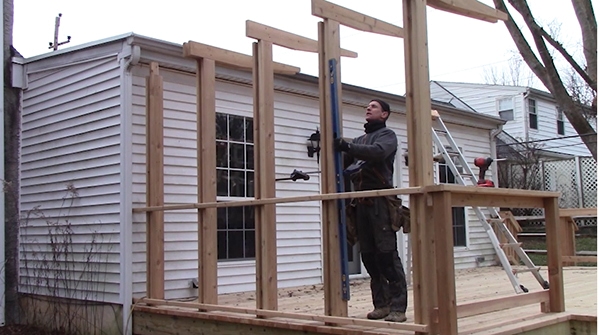 One post was a little out—the 3-ply posts are really stable—so I took two bar clamps and squeezed it into plumb. It’s basically the same idea as the bridge board.

Now that the posts are frozen and the cladding is set, it’s time to lock in the rafters.

To do that, I remove the #10s and replace with 5/16 x 4-in. Spax coated Power Lags with a washer head. An added benefit of using the #10s to set the rafters is that they create a pilot hole that makes setting the Power Lag easier and more accurate. 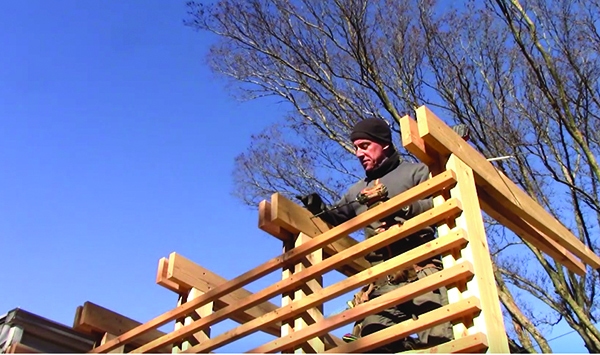 Lots going on here, most of it is impossible to show without making a feature-length film directed by Martin Scorcese. In a rare case for me, a few words are worth a single photo. Here goes… 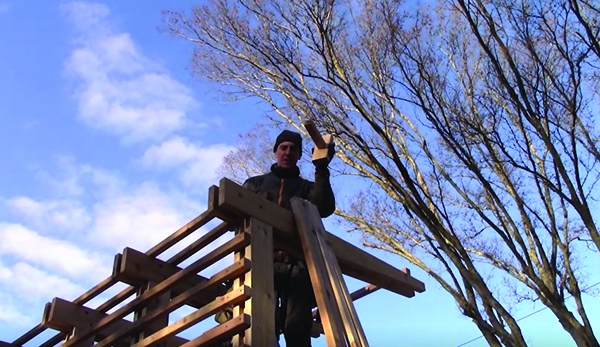 Similar to pre-checking the posts for plumb above, I made sure the rafters were running parallel to the deck boards before setting all the purlins. In hindsight, it might’ve been easier to do this before installing all the cladding, but since this has never been built before…well…it’s a work in progress. Using the front purlin as a brace, I was able to finagle each rafter assembly in-line (not parallel, but this is difficult to explain) with the deck boards below. The result is that they were all parallel with one another. To keep the unsupported rafter assemblies from squeezing together before the purlins could hold them, I made a little T-block. Laying out the purlins 6 inches on-center worked out nicely.

This is an actual photo of me loving this. 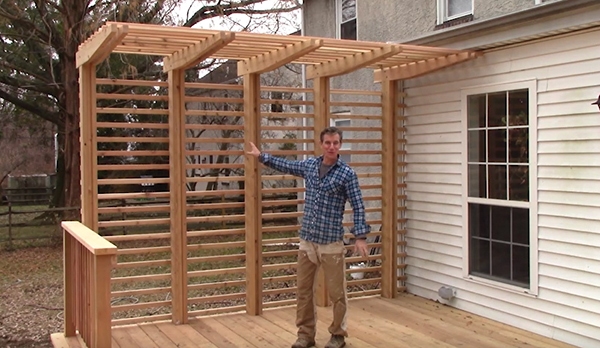 It’s my client’s design and I had my doubts, as all carpenters do.

But sweet googly-moogly, this is so awesome looking that I’m 100-percent in. I’d build another one tomorrow. Locked tight with Power Lags and joist blocking, top to bottom I have zero doubts in its structural integrity. I have less than zero doubts about how cool it’ll be to sit out here in summer and enjoy how cool it is on a warm summer night.

SunTuf Corrugated Polycarbonate Roofing Panels are a great choice to help make outdoor covered projects come to life. SunTuf panels are lightweight, super tough and easy to install. Use them to cover just about any type of outdoor structure for increased outdoor living area, storage or shelter—rain or shine! 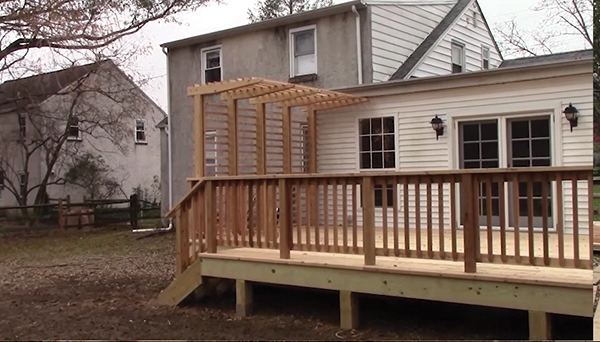 Whether you’re building a simple storage shed, a patio cover, skylight, or a full-fledged outdoor living area, SunTuf will protect against nearly any weather condition. Virtually unbreakable, SunTuf is up to 20 times more impact-resistant than fiberglass, and offers the best hail protection available in transparent or translucent products. It easily withstands snow, ice and extreme temperatures. And SunTuf has built in 99.9 percent UV protection, keeping you, your family and your pets from the sun’s damaging rays. With three standard colors and five specialty colors, the wide selection allows you to pick the right combination of light transmission, diffusion and color to fit your style.

If you’re looking for 100-percent shade for your roof cover project, SunTop Corrugated FOAM Polycarbonate is available in opaque, vibrant colors. The non-transparent structure of the SunTop panels provides complete shade plus protection from harmful UV radiation. Lightweight yet tough, SunTop also offers rigidity and impact resistance, and can stand up to Mother Nature’s full range of weather.

Learn how to easily enhance your outdoor living space by visiting:  www.PalramAmericas.com/SunTuf.