Home » Newest Articles » Respect Your Ladder when Working at Heights

Respect Your Ladder when Working at Heights 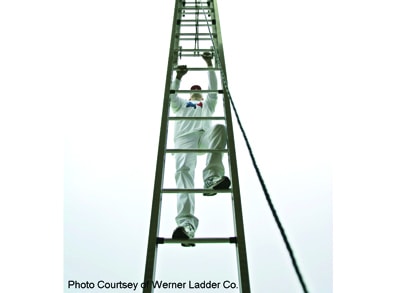 It’s Not the Fall, It’s the Sudden Stop

If you want to see acrobatic feats of bravery from death-defying heights, just watch a roofing crew when there is no safety inspector around. Fall restraint ropes? What a nuisance. Safety harnesses? Those things chafe!

A roof ridge becomes a balance beam, and ladders are treated as stilts or even vaults. I’m not condoning this behavior. It only takes a single misstep to end in tragedy, and that reckless confidence suddenly looks like a stupid idea. The trouble is that with years of experience many people get too comfortable working off the ground and lose respect for that stubborn force called gravity.

Never make that mistake. The Consumer Product Safety Commission (CPSC) annually reports that over 100,000 people are treated in hospital rooms and doctors’ offices as a result of falls from ladders. Most of the injuries are cuts, bruises and fractures, but more than 300 annual fatalities occur from ladder-related injuries.

It should go without saying that a rickety ladder which sways or leans should be avoided. Are parts loose or missing? That’s probably a red flag, too. And of course you should avoid ladder work if you’re feeling tired or dizzy (or, let’s be frank, hung over). However, even the most seasoned ladder veteran can overlook some simple safety issues that may pose a problem.

Ladder use in high winds or rainstorms should be avoided. A common mistake of storm-wary homeowners is that as soon as a downpour slacks up, they run for a ladder to check for roof damage. Not only does rain make the ladder rungs slippery, and working atop one may tempt fate as a human lightning rod, but homeowners often overestimate a ladder’s stability in the face of straight-line winds that can topple them to the ground.

According to the American Ladder Institute (ALI), when climbing a ladder, it is safest to use Three Points-of-Contact because it minimizes the chances of slipping and falling from the ladder.

At all times during ascent or descent, the climber should face the ladder and have two hands and one foot, or two feet and one hand, in contact with the ladder cleats and/or side rails. In this way, the climber will remain stable even if one limb slips during the climb.

When working, rather than reaching of leaning too far to one side, a good rule of thumb is to keep the center of your belt buckle between the ladder side rails (or within the width of the cleats). It’s also smart to use towlines, a tool belt or an assistant to convey materials and so you’re hands stay free when climbing.

Ladders are built from one of three basic materials; wood, fiberglass and metal (aluminum). If you’re working near a source of electricity, a metal ladder should be rejected since aluminum conducts electricity. Your body can complete an electrical circuit between the electrical power supply, the ladder, and then to the ground in the event that you contact a live wire. An electrical shock on a ladder can trigger a fall or cause your heart to stop. However, if there are no electrical power sources in your work area, then aluminum has a significant portability advantage: It’s the lightest weight material when compared to fiberglass or wood.

Next, the proper ladder length is important. It is not safe to use a ladder that is too short or too long. It must be long enough that the climber does not have to stand on the top rung or step. Standing on the top cap (or step below) of a stepladder increases the likelihood of losing your balance. Likewise, when using an extension ladder, the top three rungs are unsafe for climbing. On the other hand a straight ladder is too long, for example, if ceiling height prohibits the ladder from being set up at the proper angle (roughly 75 degrees). Likewise, an extension ladder is too long if the ladder extends more than 3 feet beyond the upper support point. In this case, the portion of the ladder that extends above the upper support point can act like a lever and cause the base of the ladder to move or slide out. Safety standards require a label on the ladder to indicate the highest standing level.

The ladder you select also must be the right size for both your body and the job at hand. In other words, the Duty Rating of the ladder must be greater than the total weight of not just the climber, but also their tools, supplies, and any other objects placed upon the ladder. Climbers often forget to account for the weight of their equipment, and if the total load outweighs the ladder’s maximum capacity, the ladder could feasibly collapse.

There are five categories of Ladder Duty Ratings:

The Duty Rating of your ladder can be found on the specifications label. Safety standards require the sticker to be placed on the side of every ladder. Do not assume that a longer ladder has a higher weight capacity. There is no relationship between ladder length and weight capacity.

Your work environment, including the physical size restrictions, is probably the most important factor in determining the type of ladder to use for a given job. Many purpose-built ladders are available for specific jobs. For example, Putnam Rolling Ladders offers track-mounted ladders for lofts and home libraries, while Stokes Ladders offers “tripod” style ladders for tree-level work on the uneven ground of fruit orchards. However, the versatility of the ladder can be a major consideration, especially for the wide variety of tasks around the home.

Multipurpose ladders such as those manufactured by Little Giant Ladder and Werner Ladder offer a versatile solution for handymen and homeowners alike. By articulating like an A-frame and also extending and collapsing like an extension ladder, a multipurpose ladder can serve as an

A-frame ladder, an extension ladder or a 90-degree ladder (for getting close to walls). By adjusting the length of each side independently when in the A-frame mode, a multipurpose ladder can also provide access over uneven ground as well as staircases.

A wide range of accessories are available to increase a ladder’s versatility. The Werner Ladder Jacks mount onto the rungs to enable use of planks or stages between two ladders, providing a horizontal work platform.

Another recent trend in ladder design is the addition of adjust-able side rails. When resting a ladder on uneven, sloped terrain, workers in the past have had to dig a trench in the ground beneath a ladder rail on the high side of slope, so the ladder could be rest on an even foundation without leaning. To eliminate the digging, the adjustable rails on some newer extension ladders can extend independently on each side of the ladder to accommodate the uneven terrain.

In fact some ladders, such as the Little Giant SumoStance, take the adjustable-rail design a step further. The use of adjustable outrigger supports that extend from the sides of the ladder create a wider base for superior lateral stability when working at considerable heights.

Also, when selecting a ladder, take a look at the many accessories currently available. Ladder Stabilizers attach arm-like extensions to the top of the rails that protect the gutter, provide access to windows and add extra mounting stability. Attachable Work Platforms provide a handy storage surface for tools and materials, some of which even have magnetic plates to hold nails and screws. Extension Ladder Covers are designed to “snap” over the rail ends to prevent damage to siding, window trim and other support surfaces.

The right choice in ladders and accessories can provide a reliable off-the-ground setup for all manner of pro-grade and homeowner projects. Just remember that what goes up must come down, and safe ladder usage will ensure that you do so in an orderly fashion.

Special thanks to the American Ladder Institute for help with this article.