Home » Newest Articles » Replacing a Window with a Wider Unit

Replacing a Window with a Wider Unit 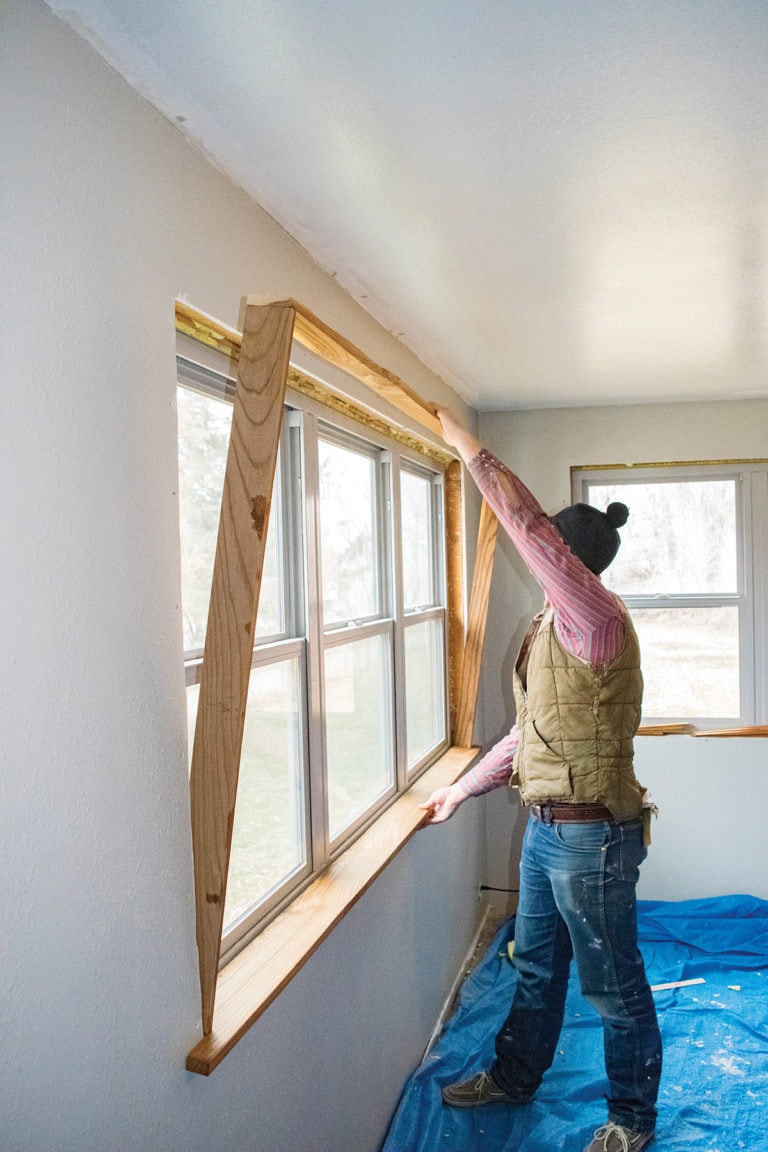 Dave Butler, a fourth-generation rancher at Spring Cove Ranch in Southern Idaho, has been tackling some home-improvement projects on the 65-year-old house his dad grew up in. He had several reasons to add and upgrade windows, a project that would improve energy efficiency, add light, increase air circulation, and provide some new views of the valley to his west.

One of the recurring themes of this project was the desire to extend the size of the windows. Some grew vertically, bringing the bottom of the window closer to the floor. Several others were made wider, which required more work because we had to replace the headers in the framing above the wider window openings. 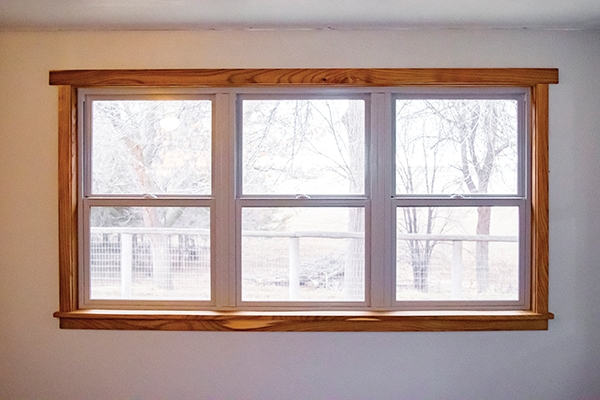 Whenever there is an opening in a load-bearing wall, an adequate support must span the opening to carry the part of the house that is above it. Most of the time this support is a header beam of sufficient dimensions to carry the load above the door or window. The header must be supported on both ends by vertical framing members, usually a trimmer attached to a king stud. It was this requirement for a longer header that made this project a bit more substantial than a standard window replacement. We determined the lumber dimensions of our header by consulting the code book. 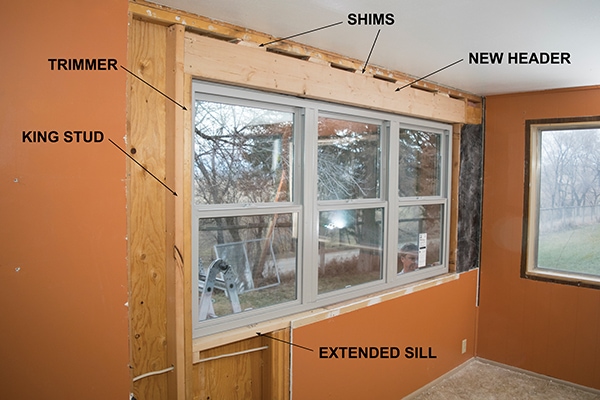 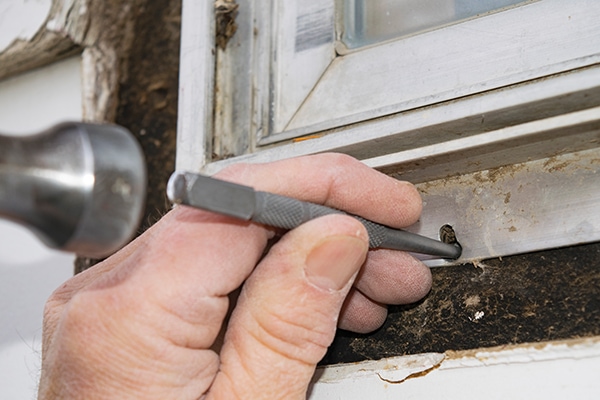 One of my favorite techniques for removing aluminum frame windows is to drive the nail through the flange with a nail set or punch. 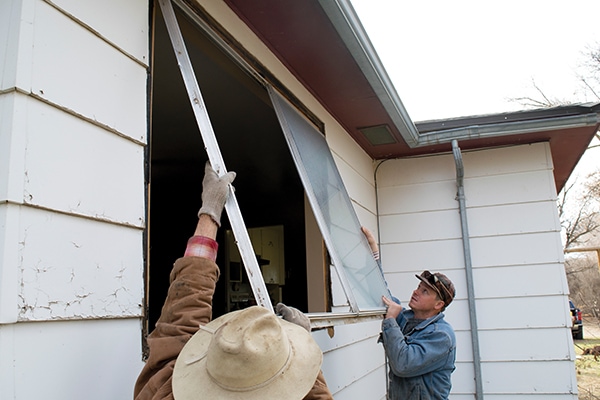 Removing the old window was easier with the slider and screen removed first. 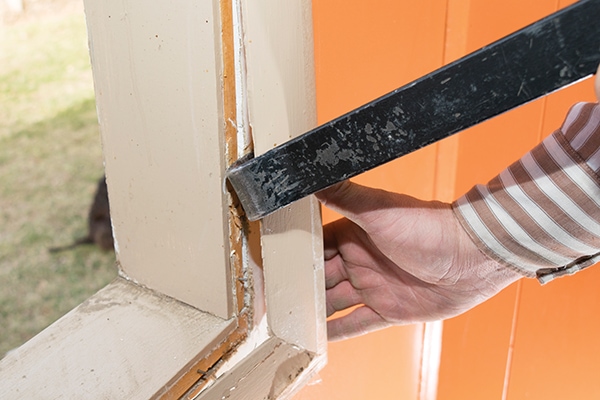 We removed the interior trim, starting with the casing, prior to removing the surround boards. 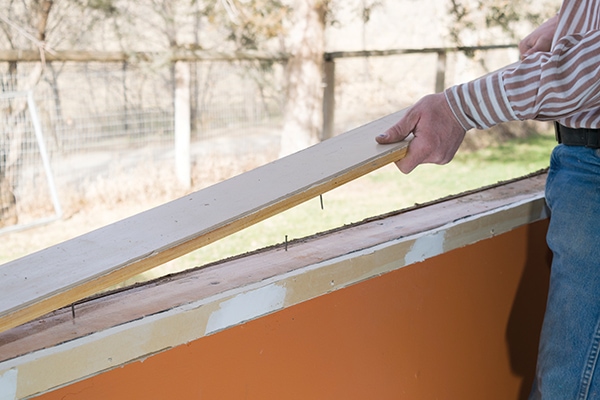 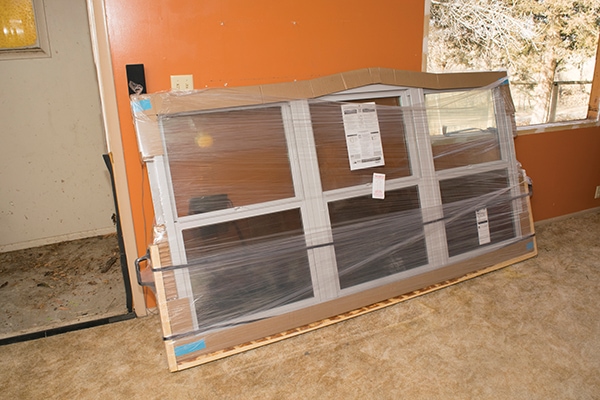 We had the new window on site so we could get accurate measurements for the rough opening. Our goal was to provide an extra 1/2 inch of room for leveling and shimming. 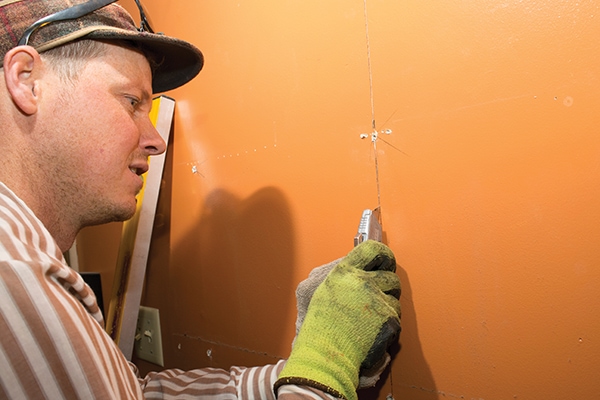 We marked the new rough opening on the interior wall and then went to the next stud outside of the opening and cut the drywall vertically with a utility knife along the center of the stud. 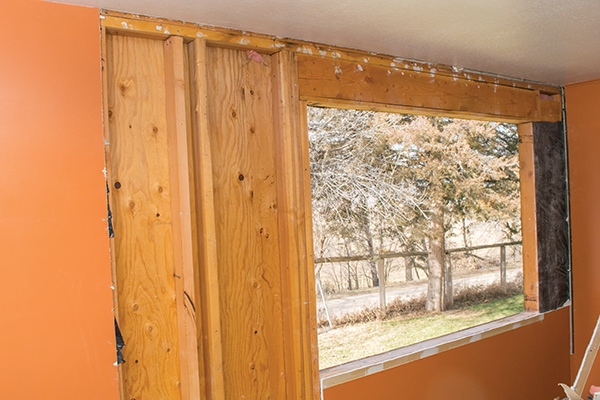 We removed the drywall from floor to ceiling in the area where the new window would extend. 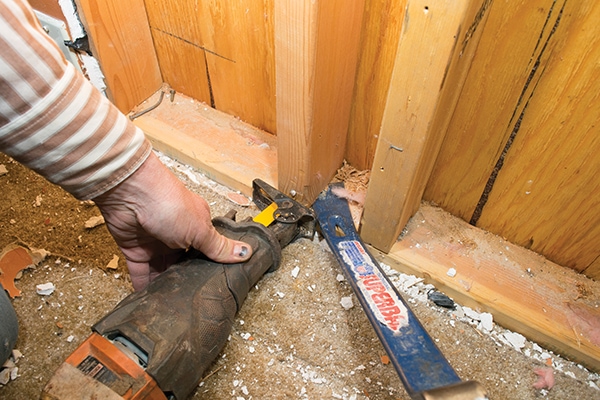 On the studs that needed to be moved, we used a flat bar to pry open space for a reciprocating saw blade and cut the stud-to-plate nails. 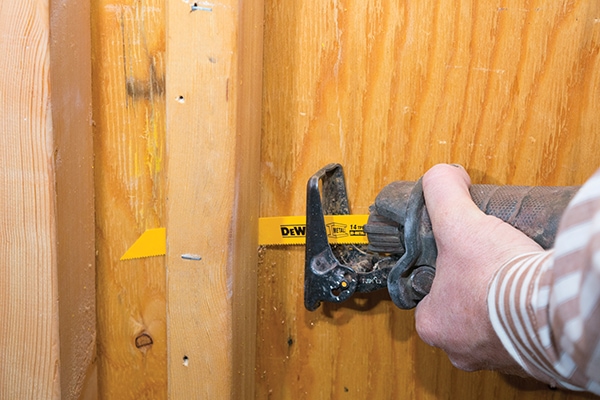 Still working from the interior, we pried between stud and sheeting just enough to use a long reciprocating saw blade to cut the sheeting nails. 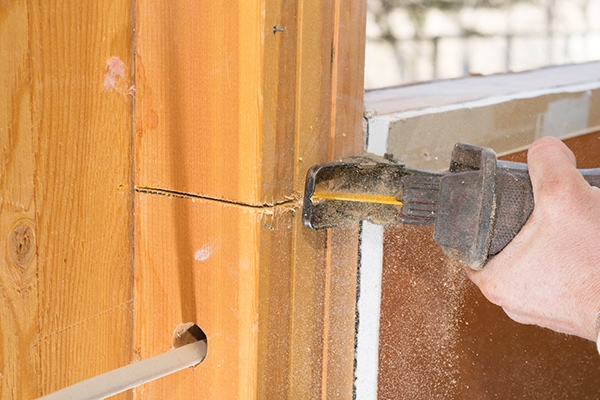 We projected a line from the bottom of the sill onto the adjacent studs and trimmer so they could be cut for the new section of sill. We used a reciprocating saw to cut the framing for the extended sill. 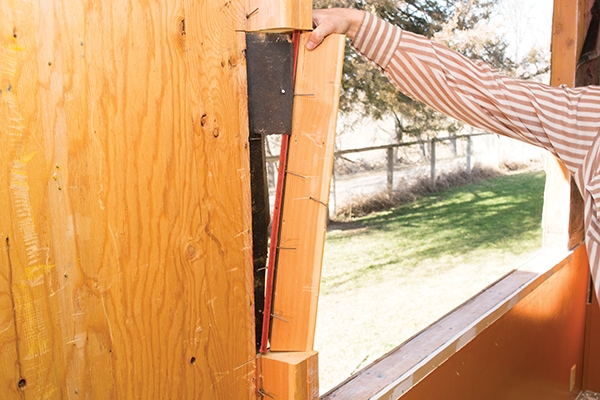 Cutting a random section out of the king stud and trimmer made removal easier. 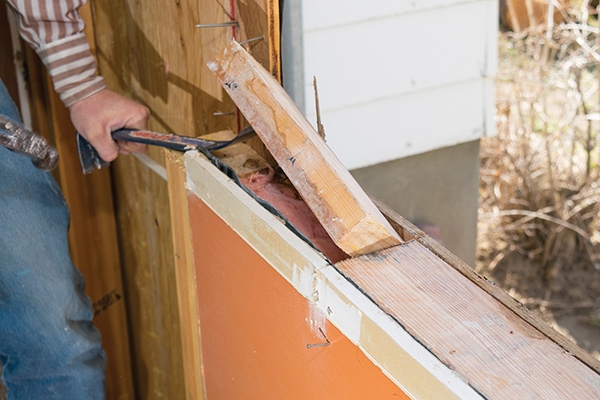 We cut the existing sill in the center of a cripple to make a splice point for the sill extension. 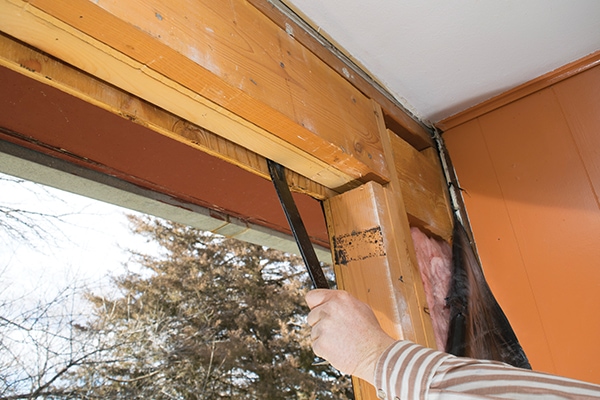 Prying between the old header and sheeting made enough room for a long reciprocating saw blade to cut the nails. 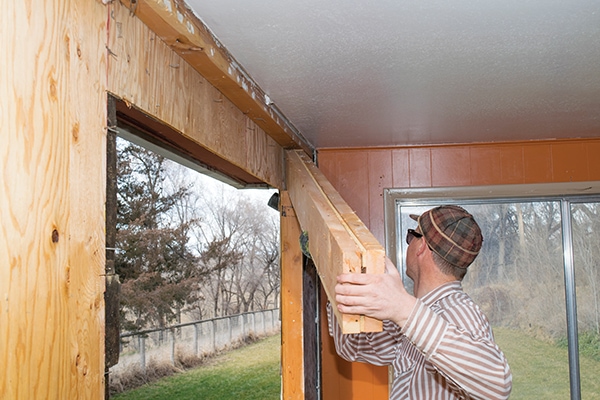 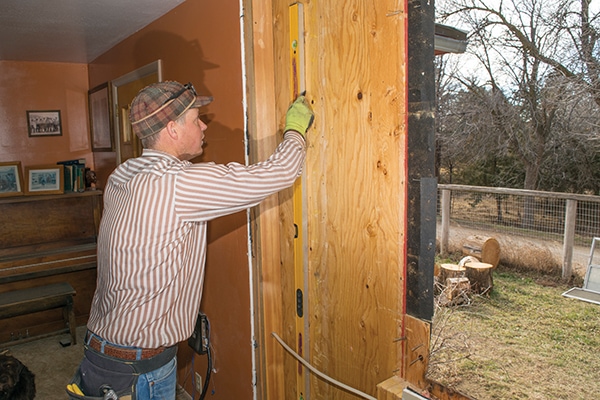 Dave used a six-foot level to lay out the rough opening on the interior side of the sheeting. 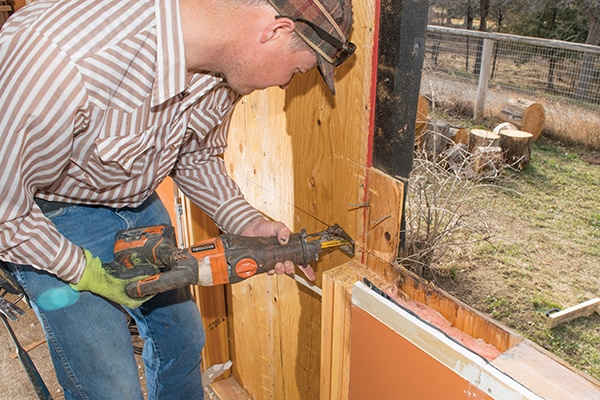 He followed his layout lines to cut the sheeting and siding from the inside using a reciprocating saw. 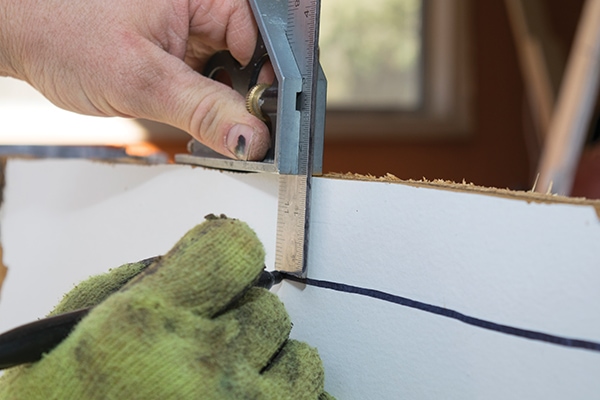 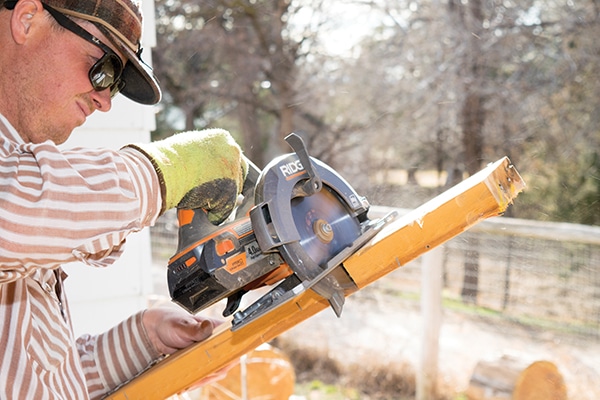 Dave marked and cut one of the existing studs to serve as a trimmer to support the new header. 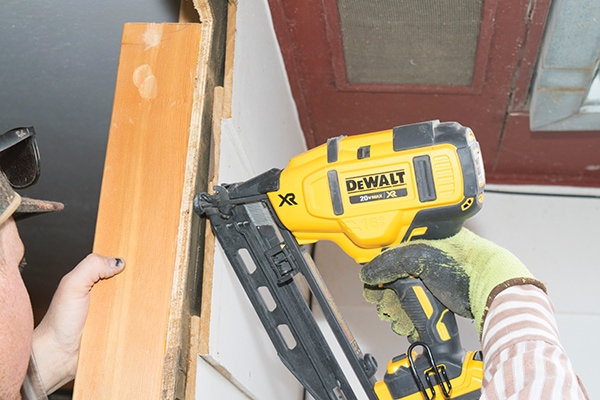 He pinned through the sheeting into the trimmer to keep it in position along the edge of the window rough opening. 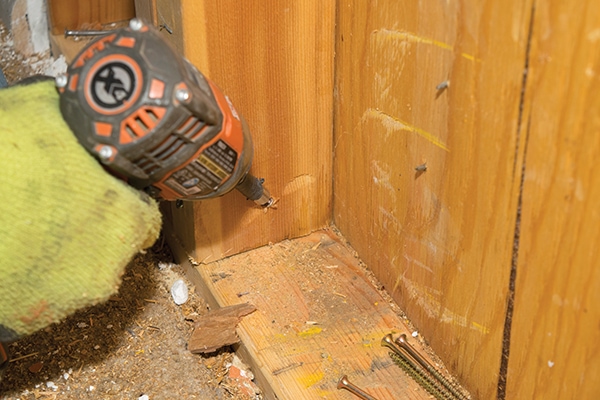 Dave cut and installed a new section of window sill framing to support the bottom of the wider window. 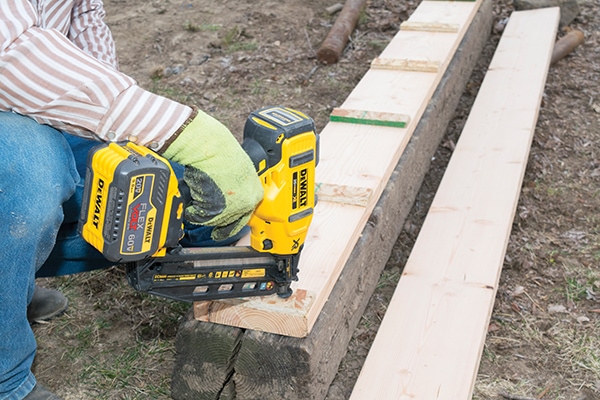 After cutting the two header boards to length, he tacked 1/2″ spacers on one board before sandwiching them between the two header boards. It’s important to crown both header boards and flip or turn them so the crowns match before nailing them both together. We determined the crown by sighting down the length of the board being sure to put the concave side of the curve down on both halves of the header. 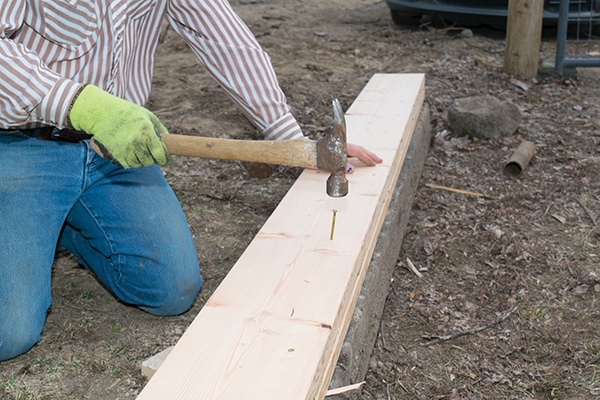 The two halves of the header were fastened together with 16d framing nails. 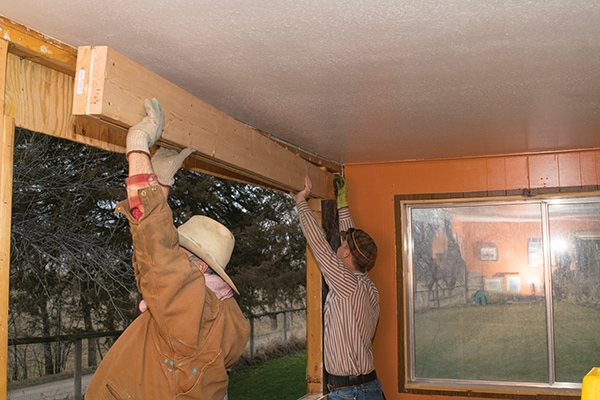 Dave found an unsuspecting cowboy wandering by to give him a hand installing the header. He nailed the header into the king studs on both ends and through the sheeting into the header in the center. 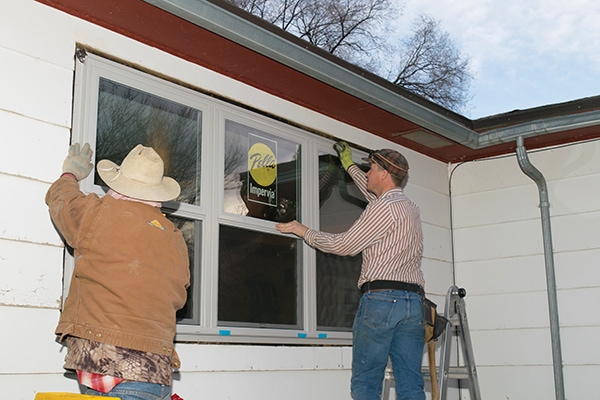 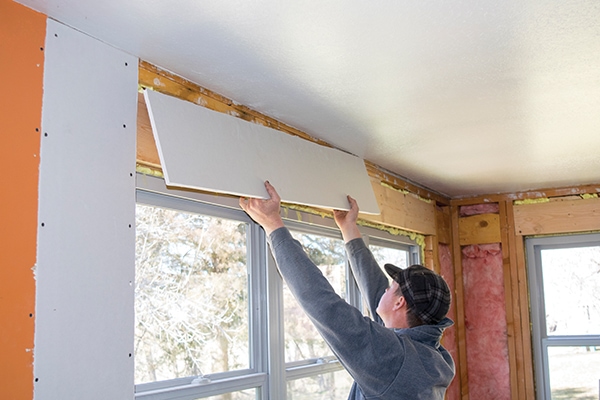 With the window installed, Dave installed new drywall. Next came tape, mud, sand, texture, primer and paint. Because of the need to expose framing, the drywall repair portion of the project adds a lot of work compared to installing a window of the same size. 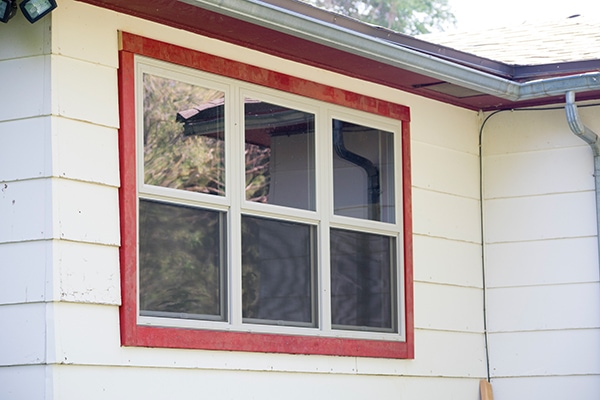 We used the exterior trim boards to mark and cut the siding before installing the trim. Because we made the framing changes from the interior side of the wall, it took very little work to complete the exterior.

We built and installed window surrounds and casing to complete the interior part of the job.