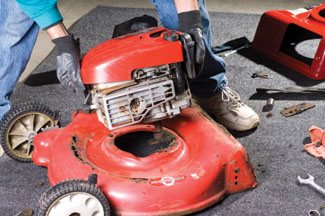 When you see more grass clippings coming out the top of your walk-behind’s deck than are going into the catch bag, it’s safe to say it’s time for a new mower. At least those were my initial thoughts, when chunks of rusted-out metal started flinging off my six-year-old push mower. I could see lots of daylight when I washed off the grass clippings from beneath the deck.

Even though I washed my old mower after each use, changed the oil twice a year and tried to keep it maintained, the thin metal of the deck wasn’t up to the ravaging corrosive effects of high humidity and my coastal location. My choices were: 1) drop a couple hundred dollars for a new model and set the old one out with the trash; or 2) repair the deck.

Being frugal, and mindful of being “green,” I chose the latter; after all, it seemed wasteful to throw away a mower that was in good shape except for the deck.

My mower is a 21-inch Troy-Bilt walk-behind. After a short Google parts search, it became clear it’s one of many brands actually built by MTD. Parts diagrams and parts are plentiful—including a Deck Service Kit. So, credit card in one hand, mouse in the other, I placed an order with M and D Mower (www.M-and-D.com). A week later UPS arrived bearing gifts: a Deck Service Kit and a new mulching blade.

An hour later, kneeling on a Bedrug (www.bedrug.com) work mat and with a little help from my neighbor, plus a few simple GearWrench hand tools, the last bolt on the new deck was being tightened. The rusted-out sheetmetal holding up the engine was already in the trash pile. In its place was a brand new, shiny red deck with new rear baffle and mulching blade. We also replaced the control cable while everything was apart.

Now when I’m walking behind my “new” mower I don’t see grass and rust chunks blowing up into the air. Not only am I back to safe mowing, I saved enough money in the process to buy mower gas for the next five years. If this is a route you find appealing, check out the photos to see how we did the repairs. 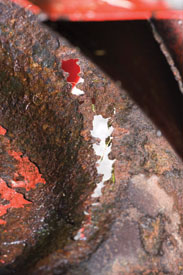 A line of rusted-out metal is the obvious sign this mower’s deck is ready for the scrap heap. But the engine and the rest of the mower parts are still in good shape, meaning it’s still a keeper. 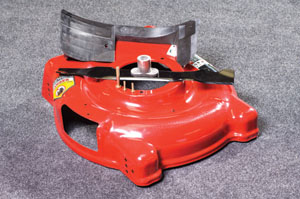 Service kits for mower decks are available for just such a purpose. Our kit consisted of the new deck, rear baffle and star adapter (to hold the blade to the shaft.). We ordered a new mulching blade when we purchased this kit through M-and-D Mowers. 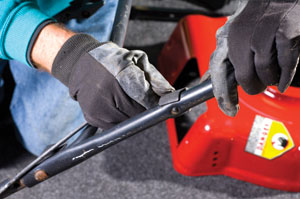 The emergency-stop control cable can be left on the handle if it’s in good shape, but needs to be disconnected from the engine. This mower’s cable was rusting, so we removed it for replacement later. 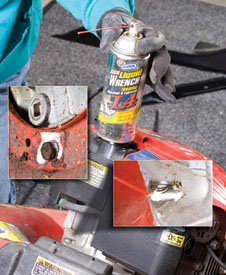 Give every nut and bolt a good shot of your favorite penetrating lubricant. We used Liquid Wrench to get through the rust on this project. 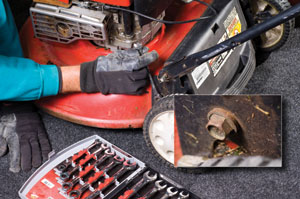 Two bolts hold the rear wheels/handlebar bracket assembly in place. One is a 3/8-inch self-tapping screw and the other a thru-bolt that requires either a 24mm open-end wrench to hold the head and a 9/16-inch box-end on the nut inside—or you can remove the wheel and hold the bolt’s head with slip pliers. We used the wrench system. 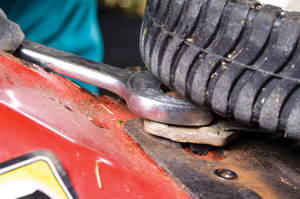 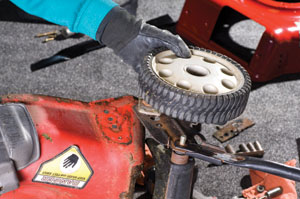 Remove the rear wheels/handlebar assembly in one piece and set aside. Keep the nuts and bolts to be reused. 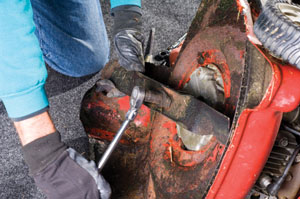 Tilt the mower on its side. Use a 5/8-inch (or whatever size is appropriate for your mower) socket to remove the blade, being careful not to cut your hands in the process. 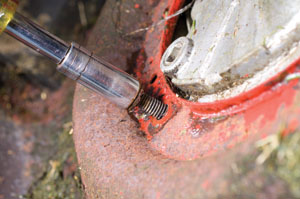 Remove the three 3/8-inch bolts that attach the engine to the deck. Be sure the threaded portion of the screw visible from the topside is well-lubricated before removal, or else you could gall the threads in the aluminum engine housing.

Lift the engine off the deck and set aside with the other parts. 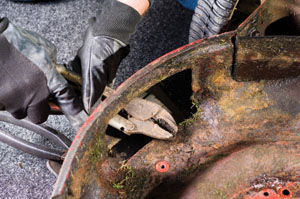 Remove the hinged mulching plug. The 5/16-inch bolts holding ours in place were rusted so badly we had to use locking pliers to remove them. It’s good to survey your mower before ordering parts to ensure you have everything needed before repairs begin. 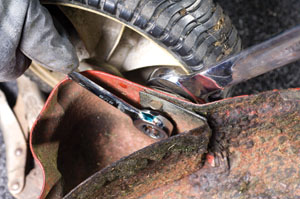 The front wheel assemblies, whose 9/16-inch bolts also hold the front baffle in place, can be removed in one piece just as the rear wheels were handled. The front baffle on our mower will be reused. Toss the old deck in the trash. 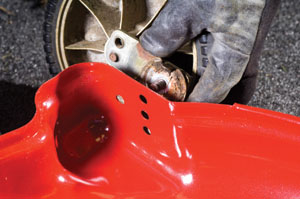 Flip the new deck upside down and reinstall the front wheels that were just removed. Use the existing mounting hardware if you didn’t order new parts. 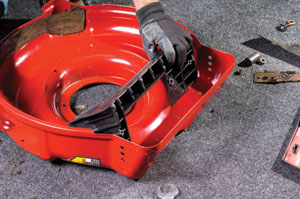 Position the rear baffle that came with the service kit and use the supplied self-tapping screws to attach it to the deck. Flip the deck over and set the rear wheels/handlebar in place. 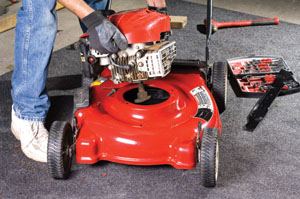 Set the engine back into position on the new deck and attach using the old bolts. 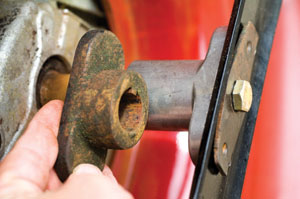 Pull the old blade’s star adapter off the engine shaft. If it is rusted in place, use a small wheel puller to remove it. The new deck is 1 inch deeper than the old one, so you must use the adapter sent with the service kit to mount your mower blade. 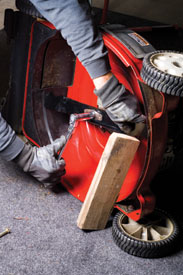 Tighten the crankshaft bolt. Make sure the blade is in the proper position as indicated on the blade face (“Down”) and use a block of wood to hold the blade from turning while you tighten. 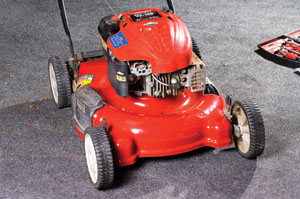 The new, finished deck provides better cutting ability than the old version and makes the mower look good as new.