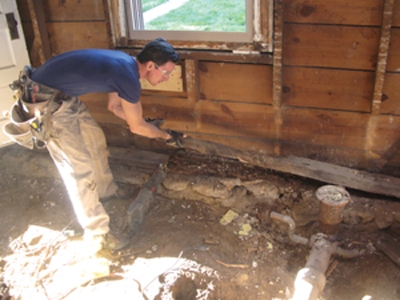 A rotten sill plate is a common occurrence in old houses—and a big problem. The sill is the piece of wood closest to the ground, either on a foundation or piers, and is usually a “timber-sized” board: 3×6, 3×8, 4×6, 4×8, and so on. The studs often rest directly on the sill and are toe-nailed in with no bottom plate as you’d find in a modern house. Often installed too close to the ground or otherwise exposed to water or insect infestation, sills can—and do—literally rot out from under the building.

The good news is that many of them can be replaced using common tools, common materials, and common sense. The bad news is that every sill replacement is loaded with individual factors so this article is more about explaining our approach rather than specific steps that’ll cover every job.

That said, one constant is gravity so we know we’ll encounter the same general things on most projects.

Signs the Sill Is Rotten

Unless you can see it from your basement or crawlspace, a rotten sill is a hidden problem you might not notice until you’re doing something else. In this case, we were demo-ing the existing plaster while upgrading a mudroom and saw the problem.

On the other hand, there may already be telltale signs: the exterior siding is buckling or cracking, the floor inside is spongy to walk on or the room has a noticeable dip. Once you see that the sill is better suited for mulching your petunias than supporting a roof, you might ask, “What’s holding the building up?”

The answer is: the membrane created by sheathing and siding—and “habit,” as some carpenters say. It won’t last forever, but it’s what’s doing the job now.

Sub it Out? Technique aside, the first step to repairing a rotten sill is to determine if this is the right job for you. If, for example, the sill sits directly under two stories of house, you’re talking about managing a lot of weight. Time, preparation and installation process—not to mention permits and inspections—are critical.

If phrases like “continuous load path,” “point-load” and “header” aren’t a central part of your lexicon, we’d recommend subbing this one out. And if you do, this article contains lots of information you’ll need to make sure your contractor knows what he’s doing.

On the other hand, while the steps are the same, there is a lot less at stake if you’re talking about a small, single-story structure like the one we repaired here. We still needed to manage the weight of the roof and walls—and used similar principles as if we were managing the weight of an entire building—but there wasn’t an entire building held up on temporary framing over our heads.

Continuous Load Path. The thing about removing a sill plate is that you have to support all the weight above it while you remove and replace it. That means you must design a temporary framing system that carries the entire load rather than portions of it.

For example, it may seem expeditious to jam a 6×6 under a single rafter or joist. However, that’s only carrying a “point load,” which is the member above it and little else. In other words, you have to send the weight of all the overhead framing into the ground, thus suspending the wall.

Generally, the most effective way we’ve found to do this—especially the heavier the weight—is to build a temporary stud wall. The way we do it is to screw a top plate to the bottom of the rafters. Next, fasten a stud plumb under each rafter. But you can’t cut studs willy-nilly. They have to fit extra tight. If you have to pound a stud into place with a 2-pound sledge (we’re assuming a concrete basement floor here, rather than a finished interior floor, dirt floor or grass), that’s the kind of tight we’re talking about.

Alternatively, you can build a similar structure outside, which is what we did. We screwed a top plate across the length of the eave, then dropped double 2×6 studs every 24 inches to the ground below (a concrete apron). We tied the studs together with diagonal bracing. Were there not a concrete apron, we would have laid 2×12 on the ground as a pad.

The load from the top plate is transferred across the plate and down the studs into the ground. The other reason for fitting the studs and plates super-snug is that you want to keep the framing above from moving as the existing framing is removed. Tension on the studs (and the existing membrane mentioned earlier) helps prevent any movement at all.

In addition to our sill plate being trashed, water had wicked up the studs and sheathing, rotting the bottoms. This meant we also had to extract the studs from the sheathing and re-structure the wall.

To get the studs out we cut them at least 6 in. above the visible rot. And while a recip saw would work for making the entire cut, they are often too aggressive and can dislodge framing from perfectly solid connections. Instead, we made a starter cut with the worm-drive saw (which turns out to be cleaner, faster and easier), and then finished the cut with the recip.

Then, in places other saws can’t go—and where the recip is king—we cut the nails between the sheathing and studs. In some cases we used a demo blade. In others, where we needed the blade to flex we used a 12-in. Ridgid bi-metal blade. Last step is to remove everything carefully.

We’ve resisted using the word ‘demolition’ for a particular reason. This process is more about picking parts of the house apart rather than tearing stuff down. Remember, there’s a building over your head. Everything is connected to everything else, and the minute you start pounding and bashing, small problems get big fast and telegraph through the framing into the siding and temp wall. Plus, it’s faster and easier to pick than to pound.

Sometimes you need to go to the muscle, as we did in pulling the sheathing away from the stucco outside, but success lies not in being all-powerful but in using power judiciously.

Many sill plates in old houses—in addition to carrying the studs—are also the main connection point for the joists, which means the new connections need to meet current code.

So, for the new sill itself, we laminated three pressure-treated Southern pine 2-by-12s together to make the new one. Laid flat, the 2-by-12 also spanned a little past the interior face of the foundation such that we were able to face nail another 2-by-12 onto the interior edge of our new sill. This 2-by-12 acts as a ledger—similar to the way a ledger in a deck works—which enabled us to attach joist hangers and joists, meeting code requirements.

Tar paper. The cause of the problem in the first place was water getting through the cladding from the outside. The sill and studs absorbed it and, over a zillion wet-dry cycles, the wood fiber finally broke down. We’re not worried about the Treated Southern Pine in wet service, obviously, but we don’t want water under our finished floor trying to evaporate up into the house. So, before installing the new sill, we ran tarpaper up the sheathing, then wrapped it over the rubble foundation and onto the dirt floor. This acts as a moisture diverter.

Sill. Next we installed the sill itself, in layers. In order to get the finished floor height right—and this is critical for doors to open and to match existing openings—we had to make sure the floor traveled level from an entry door to an existing floor in the kitchen. After lots of measuring (including with a laser level) we found that laminating three 2-bys together would get us the height we needed.

We installed the first layer of treated Southern pine and fastened it—level front/back and left/right—to the foundation using concrete anchors, shimming where necessary to keep it nice and flat. Next, we fastened the two subsequent layers with glue and screws.

Vapor Barrier. To create a complete vapor barrier over the entire dirt floor of this crawlspace, we laid 30 pound tarpaper down over the entire surface, lapping it over each previous piece such that any water that entered from the exterior would remain below the paper.

Joist Hangers and Joists. With the new ledgers and vapor barrier in place, we laid out for 16 centers and installed joist hangers on each end of the room. We then installed 2×12 joists with intermediate blocking to lock the entire floor system in solidly.

Inspection. With the framing and vapor barrier installed—but still open—the inspector wants to take a look at the structure. Also, since we were re-wiring, we did all the rough electric at this time as well and got that inspected at the same time.

Insulation and Sheathing. For the last step we insulated the floor joists and around the HVAC vent entering the room. Between that and insulation in the walls, the room requires only a tiny supply vent to remain comfortable.

And comfortable is what we are now that we know this house is not only stable, but will stand tall for another hundred years.

Editor’s Note: Mark and Theresa Clement are the hosts of MyFixitUpLife (www.myfixituplife.com)