Home » Newest Articles » How To Replace a Circuit Breaker

How To Replace a Circuit Breaker 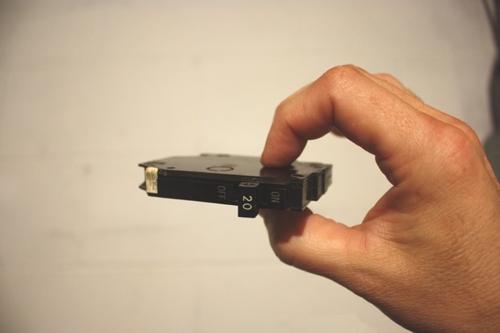 You can safely replace a circuit breaker in your electrical panel if you follow the proper safety precautions. In some localities, even minor electrical work might require a permit, so be sure to check local building codes before proceeding.

The breaker is designed to protect your wires from carrying too much current by tripping off an overload or a short circuit. Whenever you need to add a new circuit, you’ll need to install a new circuit breaker.Occasionally an existing circuit breaker fails and needs to be replaced. However, before replacing the circuit breaker, test it to make sure the problem is not elsewhere in the circuit.

Unplug any devices on the problem circuit, turn off all lights and flip the switch on the breaker. If it resets, you can then reconnect the electronic devices one at time and turn on the lights to determine where the problem is. Turn off the breaker before plugging each item back in, and then reset the breaker. This prevents a dangerous because surge of current if you have a short circuit in a device. A short circuit can send a very high amount of electrical current before the breaker trips.

If the breaker won’t reset, test it with a voltage meter. If the meter doesn’t read voltage on the load terminal even when all known loads are disconnected, then the breaker is probably faulty and needs replacement.

Always install the correct brand of breakers in your breaker panel. Gather all the information you can (brand name, part numbers, breaker size, breaker type, etc.) to determine the proper replacement. Although some breakers are interchangeable, many are not, even if they look similar. Replacing with the wrong breaker can be dangerous and may void your breaker or panel warranty. Check the breaker panel door for information about which breakers are compatible with your panel.

Standard circuit breakers monitor the flow of electricity as it enters your home and makes its way through the electrical wiring system.

Single-pole breakers protect one energized wire and supply 120V to a circuit. They’re generally rated 15 or 20 amps, occupy one slot on a breaker panel, and are the most common breakers in a home.

GFCI circuit breakers cut power to the circuit when they’re tripped by an overload of current, a short circuit or a line-to-ground fault. All GFCI breakers have test buttons on the front and coiled wires. They function in the same way as GFCI receptacles, but protect an entire circuit, eliminating the need for GFCI receptacles on that circuit.

AFCI (Arc-fault circuit-interrupter) breakers protect against an unintentional electrical discharge in wiring that could cause a fire. Once the breaker senses the abnormal electrical path, it instantly disconnects the damaged circuit before the arc builds enough heat to catch fire. AFCI breakers look like GFCI breakers with test buttons and coiled wires. The only way to tell them apart is to read the fine print on the breaker.

How to Replace a Standard Single-pole Breaker

When replacing a circuit breaker, stand on a rubber mat or plywood to insulate you against electrical shock. Use an insulated screwdriver and insulated wire strippers.

Most homes will have a combination panel, with a main breaker, and then all the branch circuit breakers below. Before shutting off the main breaker, shut off all branch circuit breakers first. Double-check with a voltage meter that the faulty breaker and adjacent breakers are shut off.

Most homes will have ‘push in’ or ‘stab in’ type of breakers. Use a screwdriver to disconnect the wire from the load terminal of the breaker. Bend the wire out of the way. Carefully pry the defective breaker out of its position. Take note as to how the breaker locks into position in the panel. With the breaker shown here, the contacts on the back of the breaker push onto the buss bar. Connect the load wire to the new breaker.

With the new breaker switched off, push it firmly into position. Then reattach the wire to the load terminal. After the cover is back on, turn on the main breaker and then one-by-one turn on all of the individual breakers. Test everything to see that all systems are normal. Replace the panel cover.