Repair for an Old Wooden Porch 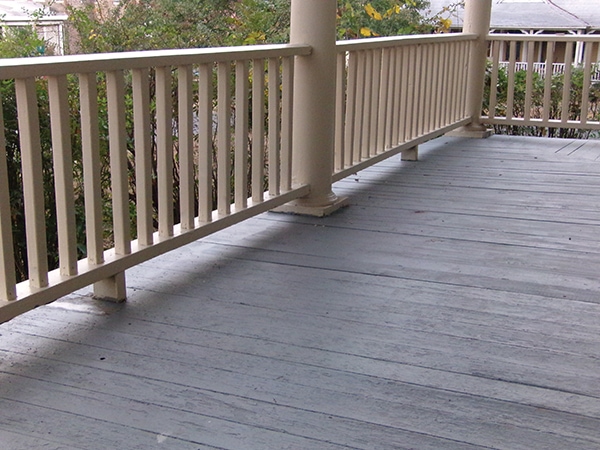 Rescue an old wooden porch from the elements.

Your house is in a constant state of battle with the sun and rain. The heat from the sun, especially in the hot summer months, wreaks havoc on paint and caulk. Rainwater presents the biggest long-term threat to any manmade structure. Wind and extreme cold temperatures also pose their own threats to houses. Even if a house has an exterior veneer comprised of brick, stone or vinyl, other parts of the house will still be constructed of wood. Porches are almost always made of wood, and many older homes have a porch floor made from tongue-and-groove lumber.

Knowing the devastating effects that water will have on a wood porch, older homes were built so the porch floors gently sloped from the house to the outside edge of the porch. This was done to allow rainwater to run off the porch and not accumulate in puddles that would eventually rot the flooring. In addition to a water-draining design, older homes also had the advantage of being painted with lead-based paint. Now no longer used due to health and environmental concerns, lead-based paint, for all of its negatives, was very durable. Our grandparents would only have to paint their houses every twenty to thirty years. Whereas, our generation is having to repaint about every ten years with 15 years being on the outside extreme.

The porch on one of my houses had taken a beating over the years and was beginning to show signs of serious water-related problems. A couple of the columns supporting the roof were beginning to sink into the floor, and one outside edge is what I refer to as a “problem spot” because of where it is situated. A gable on the main roof of the house channels a lot of water onto the end of the porch roof, which is constructed with a 23.5-degree outside angle of its own. This results in a heavy amount of runoff being blown into this end of the porch.

I decided to replace the entire side of porch flooring with the exception of a roughly 4-ft. span that I could tell was the original porch flooring from when the house was built in 1880. Since this section was still in pretty good shape and was also original to the house, I decided to leave it and only replace what was on both sides of it.

I am of the belief that the only two materials to use on the exterior of historic homes are pressure-treated lumber or some type of plastic/polymer product. The two porch columns that were sinking into the floor were in good shape since someone else had already replaced their wooden bases with composite bases. Even though the flooring under the base plate was rotting, which caused the posts to sink, the bases themselves were in perfect shape.

In order to repair my porch I needed to use tongue-and-groove (T&G) lumber. However, I’ve yet to find any place that sells pressure-treated T&G lumber. The flooring that I was replacing was untreated 1×4 T&G pine. I decided to mill my own T&G from pressure-treated 1x4x8 stock.

In order to do this, I would buy twenty to thirty pieces of treated 1x4x8 from my local lumber yard at a time, making sure that I would get the best looking pieces (not warped or bowed). The next step is to let the lumber dry out. Treated lumber is milled while it is wet and is normally still wet when it is received by the lumber yard. Through trial and error, I determined it is much harder to mill a tongue and groove on wet wood. However, don’t just throw the wood into the August sun for a couples of days, because it will warp and bow in unimaginable ways. I learned this the hard way. The best method is to stack the lumber tightly together in a bundle and place some weighted objects on top of it at each end and in the middle. Lay the bundle of lumber in a place that gets some sun but not the full direct sun of late summer. After about three days of this, move the lumber onto your porch out of the sun. Rearrange the lumber in the bundle; place the wetter pieces toward the top of the stack and leave it for the remainder of the week.

Once the wood has dried out sufficiently it can easily be milled on a router table using a tongue-and-groove bit. I prefer using a router bit with a 2-in. arbor for this job. I also highly recommend purchasing a router with the highest horsepower you can find and one from a reputable manufacturer. Running twenty and thirty boards through a router, adjusting the bit for the other side, then making the same number of passes puts a lot of strain on the router motor.

As I milled the tongue, or male end, on each piece I would run a 1/4-in. wood chisel down either side of the tongue to clean up the cut and make sure it was smooth. Once the wood is milled, be sure to stack it back as previously described out of direct sunlight, weighting the stack to prevent warping or bowing. 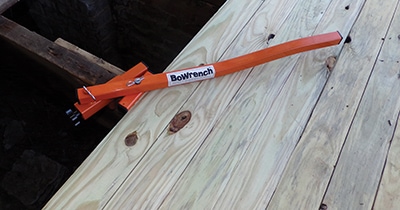 A BoWrench is a handy tool for bending bowed boards and for closing T&G joints.With the lumber milled, begin removing the old porch flooring. My son Sterling and I used framing hammers and a pry bar to pull it all up without much difficulty.

The hard part came when we reached a column. Needless to say, it’s not feasible to simply remove the flooring from under the column. The column is supporting the roof, therefore the load has to be supported to remove the column. In order to do this, we removed the flooring up to the column and then placed a 20-ton hydraulic bottle jack on top of the brick foundation under the porch. We used a rough cut 4×4 post as the jacking piece between the jack and the porch header. I then slowly jacked that section of the porch up off the old flooring. Make certain that the 4×4 post you are using on top of the jack is perfectly plumb. I used a post-level for this job. If the post is not plumb—straight up and down—the resulting angle can cause the post to slip, often violently, off the jack. This can result in bodily injury to whomever is operating the jack or damage to your house when everything crashes back down, or both.

I also strongly recommend removing the old flooring and installing new flooring up to a point that is near to each column to be jacked-up. Since the boards interlock each other, having the mating boards in place reduces the amount of time that any one column will be suspended in mid-air by only the jack. Also, be sure to place the jack on the side of the column that is the farthest from the area that you are working. Otherwise, you will run into the jack before you have installed the new flooring under the column.

With the column suspended we were able to remove the old flooring beneath it. We used a reciprocating saw with a metal-cutting blade to remove a nail or two that we discovered under the column.

Installing the newly milled T&G flooring was probably the most difficult part of the project. Some of the pieces would slide easily together while others were very stubborn and had to be persuaded together. Through experience my son and I determined that the best way to install each piece was to start at the outside and slide the new piece of flooring along the tongue of the last one installed. Even with using careful storing techniques there will be some minor warping and cupping that make the installation process more difficult.

As each piece is fitted in place I would nail it diagonally (45-deg. angle) through the tongue. This eliminates any holes on the exterior of each piece of wood. We discovered that in the nailing process the outer edge of the new piece of flooring would be pushed down slightly by virtue of the downward pressure exerted by the nail gun. This downward bending of the board would hinder the installation of the next piece until we learned to rectify the problem by hitting each installed board from the bottom with a hammer directly next to each joist that it was nailed into. This eliminated a lot of installation problems.

For the most part, any piece of flooring that wouldn’t easily slide the entire length of the last installed piece could then be persuaded by a few firm blows from a hammer and block on its outside end.

In order to obtain a tight jointing of each piece of T&G lumber we employed a tool called a BoWrench. This is a truly wonderful device that clamps itself onto a floor joist and then uses the reverse pressure to place tension on the piece of lumber being installed. It comes with a regular head that fits around modern 2× type lumber. However, I recommend the adjustable head that will allow it to fit over true dimensional lumber and also over multiple pieces of modern 2× type lumber.

All of the angle cuts were made using a miter saw. Once installed, the outside ends of the new pieces of porch flooring were cut off with a jig saw after marking a straight line with a chalk-reel.

As a final suggestion, the jacking up of the columns also necessitated the removal of the porch railings. The best and easiest way to do this is to loosen the joints where they connect to each column and then run a reciprocating saw with a metal-cutting blade through the joint to cut the nails off. Once each section of railing is loosened it can then be removed by lifting it up and sliding it out of place. Porch columns, especially older ones, are tapered so they are wider at the bottom and more narrow at the top. This allows for the easy removal of the railings.

My side porch measures 22-1/2-by-7 feet. I replaced all but about 4 feet of the entire side of my porch with pressure-treated T&G lumber that I milled myself for a cost of less than $300.00. Comparing that to what a contractor would charge for the same work, it makes me glad I know how to do it myself.