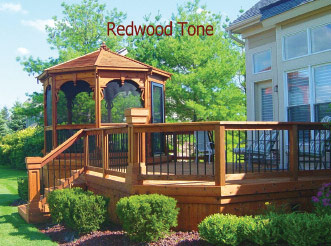 It sounds too good to be true. But, in fact, there is a wood stain available that combines the effectiveness of the drying concentrate of a typical stain with two non-drying oils, which soak into the wood and actually improve the condition of the wood. Plus, the best part is that this product also meets some of the most stringent VOC standards in the country as it contains 250 VOCs and is produced in California. The product is Armstrong’s Wood Stain and it is manufactured by Armstrong-Clark.

“I always wondered why there wasn’t a stain available that was longlasting, easy to apply, a breeze to maintain and could go over the previous coating without stripping,” said Jake Clark, president of Armstrong- Clark. “Well, we figured out how to do all of that and meet the California VOC standards. By January 2010, the EPA is increasing the requirement to 250 VOCs nationally, so you, as a storeowner, need to be prepared in terms of what products you carry.”

While the new EPA standards force dealers to reassess what products they want to sell, Clark also pointed to the difficult economy as another factor in how dealers sell. “During hard economic times, storeowners should look at reassessing their product quality. People are not taking vacations anymore. They are using that time to stay home and enjoy their outside living space. To do this, they are using part of the money they might have spent on vacation, and putting it toward high quality products while staying home and completing the job themselves.” 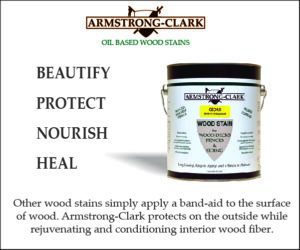 Innovation On The West Coast Clark knows what he’s talking about as he represents the fifth generation of paint and stain people in his family. He spent 13 years on the manufacturing side of the stain industry and seven years as a painter who did roof restorations. Clark then took this knowledge between the two positions and now has spent 15 years developing the formula used at Armstrong-Clark. Being on the West Coast, Clark primarily worked on shake roofs, which is where his curiosity was piqued in terms of how to improve what was available to coat these types of roofs.

“It didn’t make sense why I was putting a dry coat on dry wood. The shake roofs would turn gray and cup. I knew the products needed non-drying oils in them,” he explained.

With this knowledge in mind, Clark was buying products from Jim Armstrong, who was selling roof coatings. Clark said he eventually partnered with Armstrong and developed his own formula while marketing it under the established Armstrong’s name. Clark bought out Armstrong eight years ago and has been servicing the stain needs of the West Coast ever since.

“We’re a regional company but we’re trying to get the message out. There is no other product available that does what Armstrong’s does. Once a dealer tries it, there is no going back. In fact, I’m so confident in the product, that I will send a free, four-ounce sample can to any dealer requesting one,” Clark boldly announced.

One dealer who doesn’t need any convincing is Don Bush, the store manager of the Kelly-Moore Paints store in Tualatin, Ore. Bush, who has been in the paint business for more than 35 years, said he has carried the product for the last seven years and never has received a complaint about it.

“The thing that I like about it over any other product is that it rewets itself. You can come back the next year and apply the product right over the previous year’s job. There is no stripping involved,” Bush said. “It’s a huge deal to have a product that provides a uniform finish without having to strip off the previous coat. It holds up as well as anything I’ve seen.”

Clark added that the products hold up even when users break the typical “rules” of using a stain. “Rule Nos. 1, 2 and 3 are to never paint or stain in the sun because the solvent will water and it evaporates too quickly. Well, you can do that with our product. Even if it’s 100 degrees outside, you can apply Armstrong’s to a deck with no problem. It’s not going to dry out because of those non-drying oils.”

Product Offerings Within its wood stain line, Armstrong’s offers its popular cedar tone and redwood tone, which are both halfway between a clear and a semitransparent. “A clear turns gray so we made it halfway between the two,” Clark said. “We are enhancing the grain yet adding pigment to reflect the ultraviolet light. This helps hold the color for a long time and enhances the fundamental beauty of the natural wood.” Armstrong-Clark offers four colors in its semi-transparent line as well, which covers 95 percent of the colors people want, according to Clark. “The problem with offering bases to tint is that they are using universal pigments for tinting. When you have a base to tint, that base is all white, then color is shot into it. There is no way to get rid of all the white from the base.

“In contrast, we use transparent-oxide pigments. This way, you don’t have mistints and consequently ‘dumpstock.’ We hear from dealers all the time who complain about having to sell mistints at a fraction of the cost or, even worse, paying to have them disposed of properly. With Armstrong’s, there are no expensive mistints.”

Another thing you’re not going to get from Armstrong-Clark is a flashy can. Clark said the money and resources go into what’s inside the can, not the outside label. Sure, he has heard from a few dealers that the can needs to be spruced up or redesigned but Clark said customers recognize the Armstrong’s brand.

“We do not sell flash. We sell products through dealers and to customers who know a good product. We have a serious product in a simple can and we like it that way,” Clark added.

That product, however, does come at a slightly higher price than some of the national brands. Bush does not see that as a problem for customers.

When you consider the procedure behind what it takes to redo a deck with the others, then it’s easy to figure out that Armstrong’s is cheaper in the long run,” Bush explained. “You are eliminating the stripper completely, which eliminates a step in your procedure. So, it’s a lot easier to use for a second time. All you need to do is pressure wash the deck and add a coat. The product leaves oil in the wood and when you add another coat down the road, then that second coat is putting even more oil into the wood.”

Bush knows how well the product works because he uses it on his own deck at home. Bush’s deck features a difficult area to stain. That area is a two-foot wide strip that sits below an overhang of his roof. This area doesn’t receive any direct sunlight, which has caused his deck to have a two-tone look in the past.

“I kept thinking, how am I going to make this area look uniform with the rest of the deck. With Armstrong’s, all I needed to do was pressure wash the deck and restain it. The look is uniform and I didn’t need to strip off the previous coat,” Bush explained.

Regional Going National? With such a great product offering, Clark is working toward taking the Armstrong’s brand national. But Clark wants to go national with independent dealers, not the giant boxes. Right now, Armstrong-Clark is establishing a distribution site in Michigan, so that dealers in the Midwest and on the East Coast receive their orders quickly.

“We’re an independent company so I like the fact that we are selling to independent dealers. It’s a different attitude among independents. Independent dealers are part of the community and they take care of their customers, just like we do. We have had a great relationship with independents and don’t plan on changing that. In fact, I personally call all of our sales leads and talk directly to stores. I am convinced once a dealer brushes out our product on a board, they will carry it in their store,” Clark concluded.