Keeping the Water at Bay: Build a SeaWall 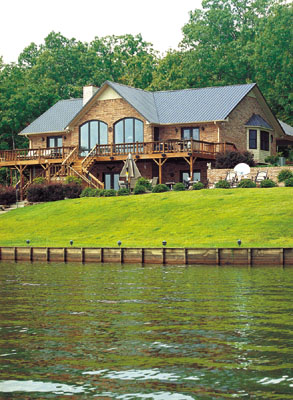 Watching your property literally wash away can leave a sinking feeling with any homeowner. Constructing a seawall helps prevent your shore from making a gradual migration to the bottom of the lake, stopping the ongoing shrinkage of your property line. And the turn of the season may be a good time for a seawall project, as many lake authorities lower the water level in autumn, allowing easier access to the shoreline.

“We brainstormed several different methods to build our seawall,” says Chad Gillikin, who constructed the wall featured in this article at Lake Logan Martin in Pell City, Alabama. He had considered creating a stone retaining wall, or perhaps using a series of wooden posts and boards. But a friend with metalworking experience suggested using 4-foot lengths of steel pipe as the support posts. Having seen the steel-post method used to construct a seawall eight years prior and finding the wall to be as strong and sturdy as ever, Gillikin decided to give the steel posts a shot.

“We used 4-foot-long, 3-inch-wide pipe. This allows 2 feet of each post to be anchored into the ground, with 2 feet above the surface to support the wall,” says Gillikin, who needed roughly 96 linear feet of seawall to keep the lake at bay. “And each pipe had 1/2-inch, all-thread rebar welded to them to mount the boards. I went to a local steel-pipe company and bought 13 sections of pipe. Then I went to Home Depot and purchased the all-thread. I took it all to a welding shop and gave the welder the measurements by marking one of the pipes, which he used as a template for the others. All thirteen pipes only cost about $150 to have them welded with all-thread.”

In addition to the posts, the building materials included two 60-pound bags of Quikrete or Sakrete to anchor each post, 24 boards of 2-by-12, 10-foot-long lumber, and galvanized nuts and washers for mounting the boards. 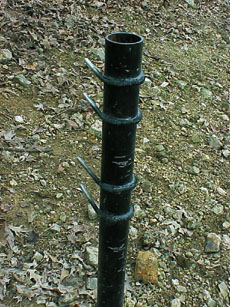 To construct a seawall, first mark along the shoreline at 8-foot intervals, indicating the positions for the posts. As you do so, keep the locations as level as possible along the slope of the shore. Also, keep in mind the typical variances in water level for your property. The seawall needs to be positioned as a barrier to the water, and placing it too low, or building it too short, may result in a submerged wall during high water levels. Shorelines with a shallow slope and predictable, gradual changes in water level, such as Gillikin’s property, may not require much height for a seawall to function properly.

However, significant changes in water level may require a taller wall to adequately protect the shore.

Additionally, research the regulations for your waterway. Localities and private lakes often have rules or laws governing where such a wall can be built along the shore. On this lake in particular, the property first had to be inspected and the project certified before beginning construction.

The next step is digging the holes to anchor the posts, which proved to be the most challenging phase of construction for Gillikin’s crew. The lake bed at Logan Martin consists of hard rock and compacted Alabama red clay. Digging through the stuff can be like digging through cement, and each hole had to be at least 2 feet deep and roughly 10 inches wide. Plus, the slope toward the shore made it difficult to bring in heavy machinery, so they tried digging with rock bars and post-hole diggers. Then they tried two-man augers. “I even had someone back up a tractor to the shore with a rear-mounted auger,” says Gillikin, “but the lake bed was just too tough to cut through. 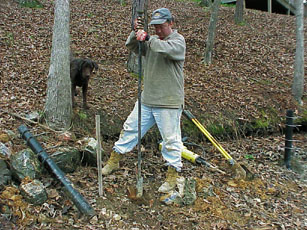 “I talked to a few professionals who specialize in building seawalls, but they avoid jobs where they have to deal with earth like this,” he says. “The amount of work involved is just not worth it to them. I couldn’t hire anyone to do it, so I was saddled with having to do it myself.”

The trick? A jackhammer. A Bosch Brute breaker hammer, available at most rental outlets (or retail for $1,399), afforded the ability to dig the holes through the concrete-like earth, splitting several huge rocks along the way. “We were basically working as weekend warriors, and at the rate it was taking us to dig the holes with rock bars and post-hole diggers — two days to dig only three holes — we simply didn’t have enough time to commit to the project. But with the jackhammer, we had the tool we needed. The jackhammer was the key to the project.” 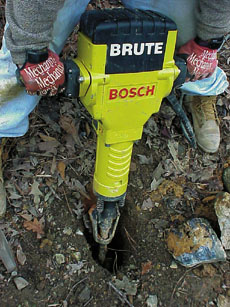 Once the holes are excavated, it’s time to set the posts. Use a level and a string to make sure the posts are plumb and even with each other. Keep the height of the posts as level as possible to give the wall a nice, uniform appearance. Then fill the holes with concrete. Use strips and stakes to keep the posts in plumb position while the concrete dries (allow at least 24 hours for drying). 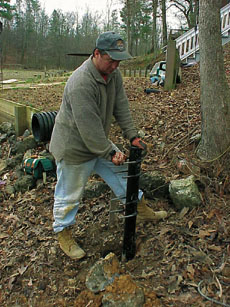 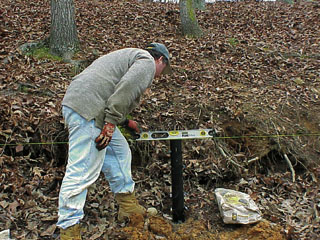 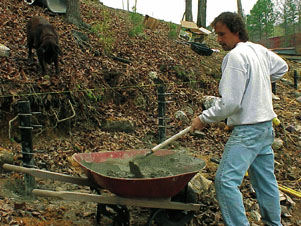 Next, measure and cut each board to the length needed to fit between the posts. As shorelines tend to be irregularly shaped, you may have some discrepancy in measurement from post to post, so each board must be measured and cut independently. Then measure and mark each all-thread mounting location on the boards. Again, each mounting hole must be measured separately. Drill the holes and have someone help you mount the boards. 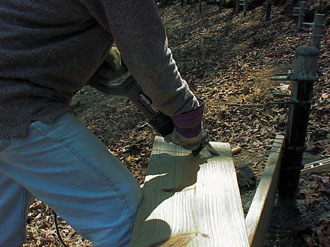 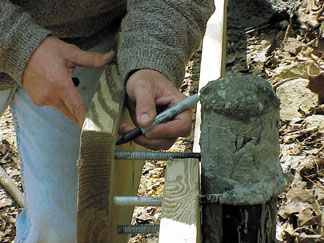 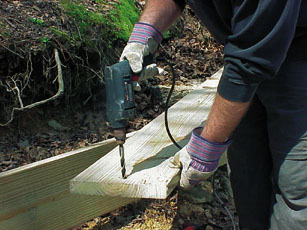 Mounting the boards is another tricky task. Specifically, it is difficult to perfectly thread both ends of the 2-by-12 directly over the all-thread rebar, especially if there’s some discrepancy in angle or measurement due to the shape of the shoreline. A perfect fit can be tough to find. Luckily, Gillikin had planned ahead. He had instructed the welder to leave at least 4 inches of rebar protruding from the face of each post. The 4 inches allow enough leverage to manipulate the rebar when mounting the boards. Place a 2-foot piece of hollow conduit over the rebar and use it as a pry bar to bend the rebar as necessary. Push the boards onto the rebar and all the way to the back of the thread, flush with the post. At the end of the project, remove the excess rebar with a reciprocating saw. Coat the nuts and washers with a clear silicone sealer for extra protection. 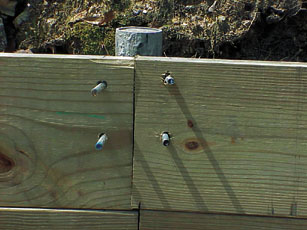 Gillikin notes that some builders choose to install the posts on the outside of their seawall. “But we installed our wall with face boards on the water side, concealing the posts,” says Gillikin. “We felt like that would give us the advantage of easy accessibility if we needed to replace a damaged board in the future, because the opposite side of the wall would ultimately be covered with backfill.”

To backfill the wall, fill the lower portion with large gravel or crushed rock to allow plenty of drainage from shoreline runoff. Cover the rocks with sand and then a final layer of topsoil.
The last step is to cover the lower front of the seawall with riprap (stones or chunks of concrete), which will help prevent the water from substantially eroding the foundation of the wall.

Once the seawall is completed, you’ll have an effective barrier against the woes of water erosion, protecting your shore from washing away with the tides. 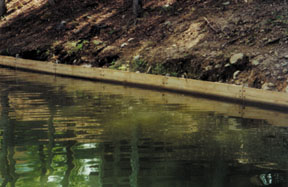