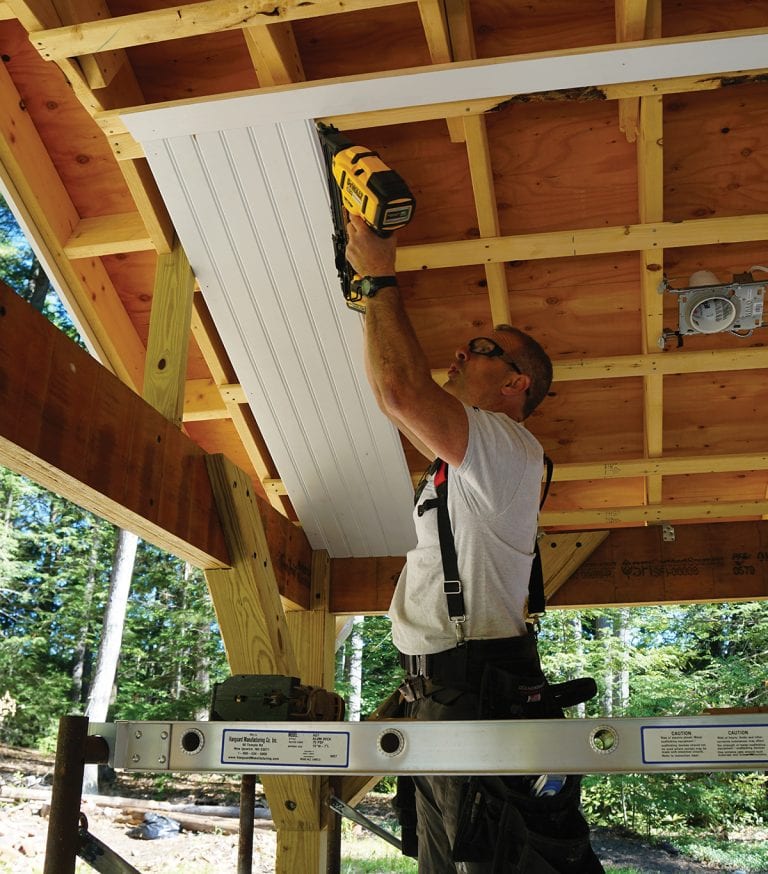 Historically, beadboard was a durable, basic wall or ceiling finish that was common by the 1880s and was also popular in cottages, camps and unheated buildings.

We recently built a screen porch for a client who wanted a beadboard ceiling, but they wanted the orientation of the boards to be different than most ceilings they’ve seen. The wanted the boards to run parallel to the roof rafters, not perpendicular. The beauty of beadboard is its versatility, which is only limited by the user’s ideas.

In order to accommodate the pattern, we first had to install 1×3 strapping at 16 inches on center so we could install and fasten the beadboard. This 90-degree alignment provides a nailer at every 16 in. for fastening the boards.

We measured from the top of the roof down to the LVL on both ends of the porch. In a perfect world these two measurements would be the same, but they were off by 1 inch.

We decided to use a super highly technical carpentry trick called “splitting the difference” (just kidding). We took the 1/2 inch off the largest measurement and cut all the sloped ceiling boards the same size. Once we knew that measurement, we snapped a chalk line across the top of the ceiling slope as a visual reference.

Tip: If you’re able, cutting all the boards the same size keeps things consistent and allows you to set up a cutting jig for faster, more efficient cutting.

We installed a temporary board along the chalk line at the top ceiling slope as a “stop” for our boards. This enabled us to push the beadboard boards against the stop to ensure a consistent line across the ceiling.

INSTALLING THE FIRST BOARD

We installed the first board against the side wall with its grooved edge facing the wall, tongue facing out into the ceiling field.

While holding the first board in position, we measured across the ceiling to the opposite wall to be sure the board was parallel to it. (If the top and bottom measurements of the board show it’s not parallel to the wall, then angle the board slightly until it is.)

With the first board held in proper alignment, we installed 6d finish nails at an angle through the tongue and into the strapping (this is called blind nailing). The nails in the tongue will be hidden by the next board’s grooved edge. I also installed a few nails at the ceiling/wall edge, this is called face nailing. You will only see face nails on the first and last boards, not on the ones in between.

Don’t worry if there’s a slight gap between the boards and the wall; it will allow room for expansion and will be hidden by molding.

FILLING IN THE FIELD

Install the second and subsequent boards by pressing its grooved edge over the exposed tongue of the first board. If it doesn’t fit tightly, hold a scrap of bead board against its outer edge and tap it lightly with a hammer. Be careful not to damage the tongue. Secure the board by nailing through the tongue and into the strapping.

Be sure all joints between the boards are tightly closed.

If you come to a ceiling-mounted light fixture, air-conditioning grille or other obstruction, remove it and cut the board to fit around the electrical box or duct hole. For a recessed light, remove the decorative trim and slip the board into position. Hold the trim against the ceiling fixture and trace where it overlaps the board. I then use a compass to finish the trace pattern.

Cut the board along the line with a jigsaw, nail it to the ceiling.

At both the halfway and 3/4-mark, it’s a good idea to take parallel measurements to ensure the boards are still running parallel. If not, you can make minor corrections by angling the boards slightly. Spread this across multiple boards to achieve parallel again.

INSTALLING THE LAST BOARD

Many times the last board needs to be ripped thinner. I sometimes rip a slight bevel (15°) so the board angles into position, but the joint looks and fits tightly. Another trick I sometimes use is to leave the second to last board loose, and snap them both into place at the same time.

Whatever method you choose, you will need to face-nail either the last or both boards when done.

BEADBOARD NOT LINING UP?

Our installation had three sections of beadboard; the two slopes and the flat top section. One thing that is fairly typical for this type project is you’ll notice that the boards do not directly line up.

To combat this and also hide the butt joints of the joining sections, we installed trim boards with the roof angle ripped on the edge. This trim board covers the seam and also breaks up the boards, disguising some of the misalignment. 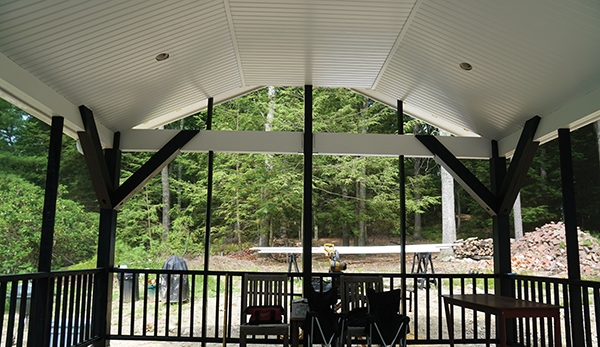 FINISH WITH TRIM OR MOLDING

While not always needed, one way to deal with the lower and side edges (seams) is to install a small molding strip—or custom make one. We typically use leftover beadboard and rip 1×1 strips to finish the edge seams.

Editor’s Note: Rob Robillard is a remodeling contractor in Concord, MA, and editor of www.ConcordCarpenter.com.