Home » Newest Articles » How to Use Hand Planes

How to Use Hand Planes 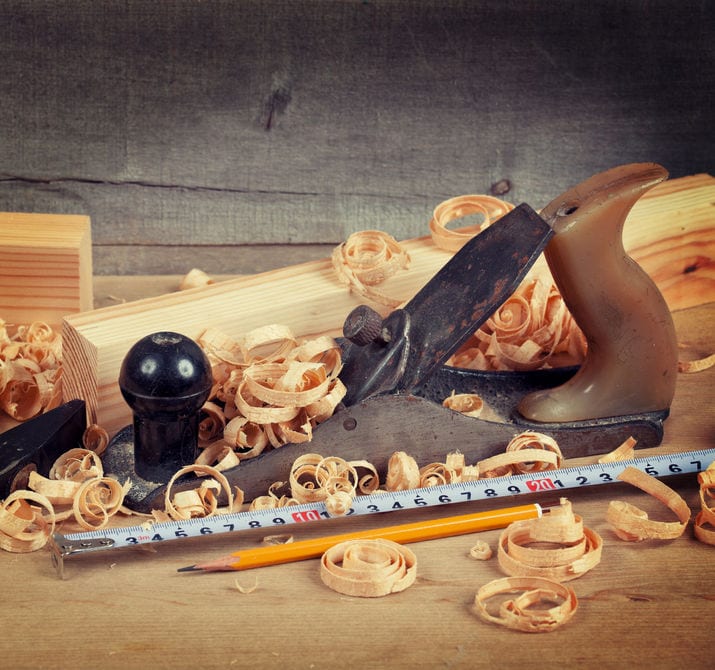 Hand planes are the epitome of fine woodworking. Extreme woodworkers use them, and serious collectors collect them. I’m both. I began with some of my father’s old planes and these days look for old and/or unusual planes. But, they have to be in working order because I also like to use them. Planes come in a wide variety of sizes, styles and designs for specific woodworking purposes. Planes are available made entirely of metal, or made of wood with metal blades and parts. In fact, you can buy the blades and make your own planes, as the old-timers often did. Planes can range in price from about $25 for new, economical models to planes that cost several hundred dollars.

Although there are a variety of styles, four basic planes include the fore plane, jack plane, smoothing plane and block plane. 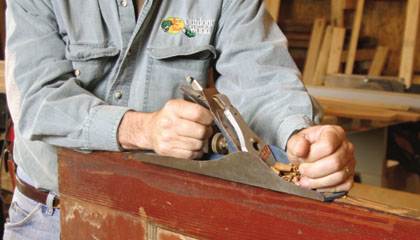 Planes have many uses; however, their primary purposes are surfacing or smoothing wood surfaces. Wood can be smoothed by other means as well, including power planing, hand sanding and using scrapers. But in the hands of an expert, hand planes produce an extremely smooth finish.

Although there are several styles, the four basic planes include: block plane, jack plane, fore plane and smoothing plane. Other names may be used for some of the styles. Fore planes may be called try planes and jointer planes. Many of the names are often used interchangeably. Planes may be “high or low” angle. High angle planes are the most common. Low angle planes are good for working end grain, across the grain or gnarly, highly figured wood. 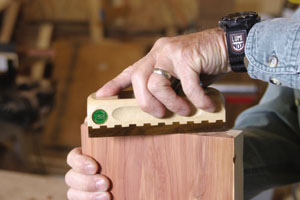 Block planes are small, intended for use with one hand, and used for doing end grain work, beveling edges and other small chores.

Block planes are fairly small, usually around 6 inches in length. They are designed to be used with one hand and quite often used for end-grain work, cutting chamfers on edges and working other “small” areas. They do not produce as smooth a surface on larger stock. A bull-nose block plane has the blade at the front edge, and can be used for smoothing in tight places, or up against another surface. 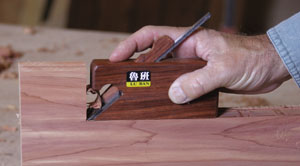 Woodcraft Supply’s bull-nose block plane allows you to get into tight corners and cut right to the edge.

Jack planes (pictured at top) normally run from 14 to 16 inches in length. Kind of “jack-of-all-trades” planes, they can be used for almost any purpose, making them a good all-around choice for a single-plane owner.

The longest planes are the fore plane or trying planes. These run from 18 to 24 inches and are also sometimes called “jointer planes.” As you can guess, one of the main uses is for planing the edges for edge jointing. With their long soles or bases, they can take the place of a powered jointer. The long soles also make them good for rough-shaping or dimensioning or leveling stock. 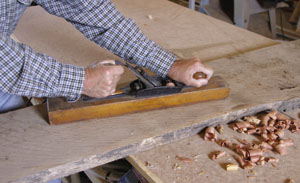 Fore or “trying” planes are the longest. they can be used for leveling stock or jointing edges. The plane shown is an antique.

Smoothing planes can provide the ultimate in a smooth wood surface, surpassing sandpaper.

Smoothing planes are also sometimes called “bench planes.” They range from 9 to 10 inches in length. Their primary use is to provide a final smooth surface. Used properly, they can provide a smoother surface than sanding.

A number of specialty planes are also available for shaping. One of the traditional old-time planes is the Stanley molding plane. It accepts blades of different shapes and is used to create moldings on edges. Although these are no longer being made, the old Stanley planes are still around, if you can find them, but the cost is high. A router plane has a footed blade that allows it to be used to rout grooves or dadoes. The rabbet or shoulder plane is used to cut rabbets or shoulders. A chamfer plane has an L-shape with a blade centered to cut chamfers on edges. Hollow and rounding planes are used to cut either concave or convex surfaces. A circular plane has a flexible steel sole and is used for planing concave surfaces such as chair bottoms. A plough or tongue-and-groove plane has an adjustable blade guide allowing you to cut dadoes and rabbets for tongue-and-groove joints. 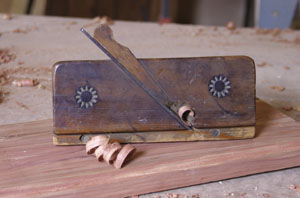 This antique rabbet plane is used for cutting a rabbet on the edge of stock. 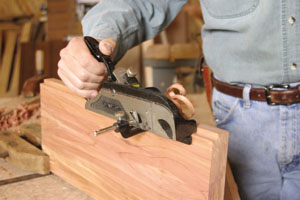 The dado plane has an adjustable fence that allows for cutting dadoes of different widths.

Woodcraft Supply’s rounding plane is used to cut a rounded edge on stock. A good example is a table edge. 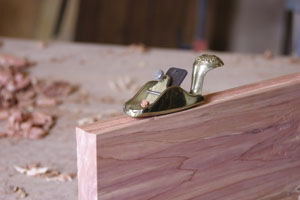 A hollowing plane cuts a concave or hollowed surface.

The first step is to ensure the blade is sharp and set at the correct angle. Unless the blade has been badly mistreated, honing is usually all that’s needed. A blade can be hand-honed using a good bench stone. Woodcraft Supply has a chisel and plane-blade sharpening guide that helps to maintain a consistent angle. Once the angle has been sharpened, turn the blade over to remove the slight “burr” left on the back. 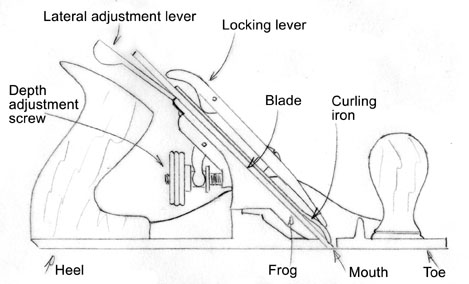 Depending on the construction and style of plane, some have a number of controls. Most wooden planes have only a wooden wedge to hold the blade in place. The blade angle is not changeable. The blade is positioned for the depth of cut and the wedge tapped in place to hold the blade. Metal planes have a turn screw for adjusting the depth of cut. The amount of wood to be removed with each stroke is important. A blade set to cut too deep may take off a lot of wood, but also requires a lot of force. When set too shallow, very little material is removed, requiring more strokes.

Many metal planes also have a “curling iron,” sometimes called an “iron cap,” that is held to the blade with a screw. The curling iron not only adds stiffness to the blade, but also causes the shavings to curl up and out, rather than clogging the mouth of the plane. Position the curling iron so it leaves just about 1/16 of an inch or less of the blade exposed, and fasten the blade and iron together. 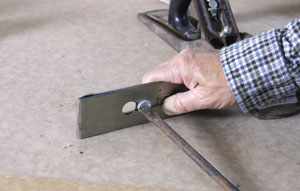 Some planes have a “curling iron” to help force the shaving up and out. First step is to adjust the blade to the “curling iron.” There should be about 1/16″ of the edge protruding.

Position the blade and iron assembly in the plane body and adjust the depth with the turn screw. One method of adjusting for depth is to place a piece of thin cardboard or stiff paper on a flat, smooth surface and under the plane. Adjust the plane blade so it just barely touches the smooth surface. This will cut a shaving approximately the thickness of the paper. Once the depth has been adjusted, make sure the blade is locked square in the housing. The blade must be absolutely parallel with the front edge of the mouth. Some craftsmen like to slightly round the corners of the blade so the corners don’t dig in. 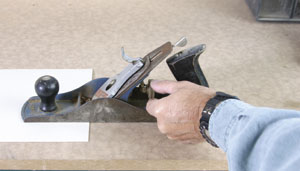 The plane-blade depth must be set properly so the plane works smoothly, without excessive force, yet produces a nice “curled” shaving. Place a piece of thin cardboard or stiff paper in a flat surface, position the plane on it, then adjust the blade to that thickness. 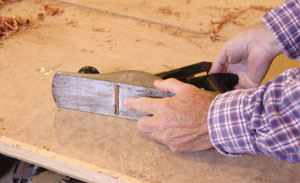 Make sure the plane blade is locked square in the housing by using the lever on the handle.

If at all possible, always plane with the grain of the wood or with the grain slanting in the direction of the stroke. Make a test cut. If the plane digs in or “chatters” and is set to the correct depth, you are planing against the grain. Make your first few strokes at an oblique angle across the wood surface. This creates a “shearing” cut and is much faster and easier to do than a cut made parallel to the wood surface. After roughing or leveling, make your final cuts parallel to the direction of the stroke. 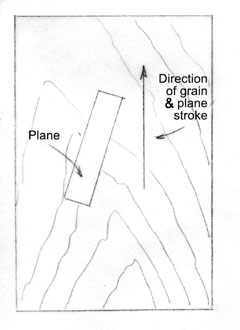 Begin your stroke with the blade off the end of the surface and with downward pressure applied to the front knob or handle. Once the entire plane is situated on the work, apply equal pressure to back and front handles and/or knobs. As the plane reaches the opposite end, apply more pressure to the back handle. This prevents an arched edge caused by the plane rocking up at the beginning and down on the end of the stroke. 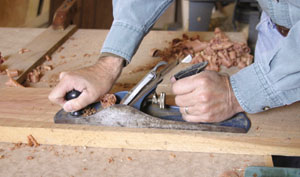 When planing end grain, hold the plane at an angle to provide a shear cut. This is essential for cutting across the grain. 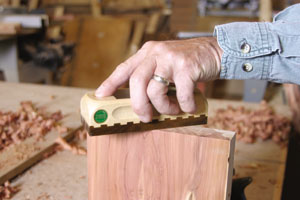 When planing end grain, hold the plane at an angle.

To smooth a wide board, begin with the jack or fore plane and dimension the board to suit. Then use the smoothing plane to create the final “glass-smooth” surface.

Maintain your planes in good shape by an occasional light oil application to the bed and adjustments. Use steel wool if necessary to keep the bottom of the bed rust-free. A bit of linseed oil can be used to keep old-time wooden planes in good shape.