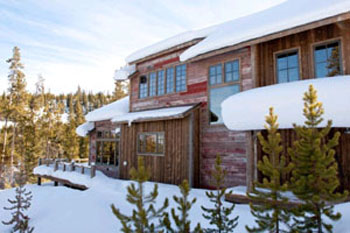 It looks old. It feels old. But it’s new. Bozeman (Montana) lumber stores have begun selling Ghost Wood, a new type of wood made to look like reclaimed lumber.

Using reclaimed lumber – which is often salvaged from long-standing, idle barns or other buildings to build high-end homes – has been a popular way to “build green” and recycle old wood that otherwise may be sent to the landfill.

But Ghost Wood is touted as a cheaper, more accessible and easier to maintain alternative to reclaimed lumber.

“There’s a ton of interest in it,” said Mike Thompson, retail store manager at Kenyon Noble, which carries Ghost Wood, as does Simkins-Hallin Lumber Co. in Bozeman.

Getting Off the Ground

Ghost Wood is created in a “six-step eco-friendly process,” using wood salvaged from wild fire and beetle-killed forests, Palma said. He declined to reveal the further details about the process because the patent is still pending. With reclaimed wood, a lot of it winds up being thrown away due to rot or other imperfections. There’s less waste with Ghost Wood than reclaimed wood, Thompson said. Builders can order the exact lineage of Ghost Wood they need because every piece is 100 percent usable.

Mark Severson, a Simkins-Hallin sales representative, said Ghost Wood mimics recycled or reclaimed wood as far as its gray color and weathered texture, but builders get a new product.

“You get it and put it up and it’s done,” Severson said. “You don’t have to go back and re-stain it like a lot of the other woods.

“We’re the only people in the world actually producing this,” he said. “It’s so new we’re actually just getting it off the ground.”

Bitterroot anticipates the demand for Ghost Wood will only grow as the supply of reclaimed lumber is running out, Palma said. “With the reclaimed-lumber market shrinking, there have been people vandalizing ghost towns,” he said. “They’re actually ripping down Ming Dynasty temples in china and shipping them over.” Bitterroot donates a portion of its profits from Ghost Wood to the Montanan Ghost Town Preservation Society, which is based in Bozeman. Around two-thirds of Montana’s old mining camps and towns have been lost to rot, the reclaimed-lumber market or other demolition, said Dick and Rosemary Lee, officers of the Montana ghost Town Preservation society. “Virtually every time we go back to a ghost town we haven’t visited for a couple years, there are more buildings demolished,” Dick Lee said.