Compost is supposed to rot … houses are not. Unfortunately, wood rots. Unless kept dry and in the right environment, wood, being a natural material, eventually decays. How long it takes and how badly it rots depends on a lot of factors. The first factor is the type of wood, and most important, whether or how the wood is protected from moisture. Keep wood dry, and in the right environment it can last for many centuries.

In many parts of the country, wood rot often causes more damage to buildings than termites, wood borers and other pests. This is especially so in the South as well as some parts of the North, or in particularly wet and humid climates. The key factor is to have a dry, but ventilated house that works to prevent moisture from collecting and yet allows for ventilating any moisture that does collect.

The first step is to determine if you have rot. An obviously wet or damp location is easy to spot; other areas require a bit more effort. The term “dry-rot” has been bandied about for years, but it’s basically a misnomer. Wood doesn’t rot if it’s dry. But in the final stages of rot, wood can appear dry. It’s also important to determine whether the deterioration is caused by termites or rot. Wood rots due to a fungus that attacks damp wood. The rot will be visible throughout the wood. Termites eat out the softer, early-wood ring portions of wood, often leaving the harder, late-wood rings. Wood that is rotting, even in the dry-rot stage, has a mottled, dark to grayish-white appearance. The difference between the two is fairly easy to see if you examine closely. Some lumbers, Douglas fir in particular, also contain soft “white pockets” that at first glance may appear as rot, although perfectly dry. These appear as tiny white “pin-holes” with white filling. This is still dry wood, although not particularly strong. 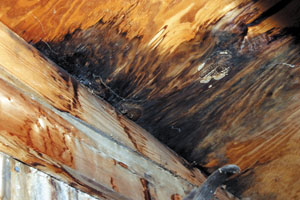 Wood rot is one of the most insidious problems homeowners can face. Although sometimes called “dry rot,” all wood-rot problems are caused by moisture, humidity or condensation.

Where to Inspect It’s important to inspect for both termites or rot if purchasing an older building. You should even check regularly with a home you’ve owned for some time. Even new construction can develop rot problems quickly under some conditions and in some locales. Use a strong flashlight to examine crawl spaces, attics, basements and other rot-potential areas. Crawlspaces, especially low-to-the-ground spaces, are typically bad rot areas. Look for wood discoloration. Take an ice pick, awl or sharp screwdriver. If you suspect an area, use the tool to punch into the wood to determine if it is still solid, or if the wood is soft and punky. The next step is to feel any suspect spots for dampness. If you feel any dampness at all, you probably have a problem. But, you should also check for termite tunnels. As with termites, wood rot begins first in damp parts of the building, then proceeds to other portions of the house.

Again, the first place to look is any place that touches the ground or is near the ground. If the wood touches the ground at any location, there’s the chance for not only rot, but termites as well. This is a common problem with poorly designed slab buildings, as well as with older buildings with low foundations that have settled over the years and allow ground contact. Crawlspaces without proper ventilation can also be a problem. This also includes areas under unventilated porches and steps.

Damp basements are another common problem. Dampness usually begins in the floor or walls, then can spread to the basement ceiling beams, and eventually even into upper-floor walls. The interior air can absorb the moisture from the basement, and the vapor then can spread throughout your house, even up into the attic. This is actually a fairly common occurrence. Other problem areas include unventilated attics, especially over the walls of a bathroom where moisture may occur due to cracks around the tub and shower. Another common moisture problem occurs around, behind and below kitchen sinks and bathroom vanities. Rot may also be created by direct moisture flow from ice dams, poorly installed roof drip edges, badly installed gutters or soffits. Decks and patios fastened directly to a house without provisions for water run-off can also cause water-collection problems. Even the splashing of rainwater on uncovered decks and patios can cause rot problems.

Rain water splashing down on a deck or patio can ruin siding. Porches and awnings can prevent some of the problem.

The Source of the Problem Do not attempt to replace or repair rot-damaged wood without first determining the source of the problem and correcting it. Begin at ground level. Make sure there is proper drainage away from the foundation and/or floor slab. If water collects in one particular area, you may have to do some grading work on the soil around the foundation. In many instances ground water will also collect in porous areas. This often shows as long-time dampness of basement walls, or even cracks or water seepage. In this case, you must first dig down, expose the foundation, apply a waterproofing material to the outside, add a drain tile next to the foundation and down on the footing, then add a layer of coarse gravel to help drain water away. Make sure the soil is graded properly to drain surface rainwater away.

Another common cause of ground-level dampness is rainwater from the roof. Good gutters and downspouts are a must to direct rainwater away from foundations. In many instances, however, splash blocks must also be used to direct the flood further away. A properly installed drip edge is also important. If the drip edge isn’t installed properly, or is missing, water seeps back around the edge of the roof line, runs back over the top of the soffit, and causes unseen damage in the soffit area and even in the roof sheathing until suddenly you notice water marks on the soffit, or worse, your ceiling.

Obvious areas of possible direct water infiltration resulting in rot are around windows, doors and any other openings in the house siding. This also includes broken, cracked or split wood, aluminum or vinyl siding. Close and seal any openings. Replace vinyl or metal siding wherever necessary. Some minor wood siding problems can be corrected with caulking. Replace the areas with more extensive damage. Once a year, preferably in early spring or late fall, inspect around all doors and windows and caulk any suspect areas.

Another obvious area for possible rot is old, poor or damaged roofing materials. Sealants around chimney flashings, vents and other roof openings can become hardened and cracked, creating potential water entryways and rot. An uninsulated roof overhang can often cause the build-up of ice dams, which also results in water seeping back under the overhang, into the siding, down the walls and into the ceiling by osmosis. This is usually indicated by water marks on ceilings and walls.

Companies such as PC-Products offer epoxy-based wood-restoration systems to ease repairs of damaged or rotted wood. These brush-on products stop rot and harden wood to renew window sills, doorframes, columns, moldings and more. Visit www.pcepoxy.com (Above: before … Below: after). 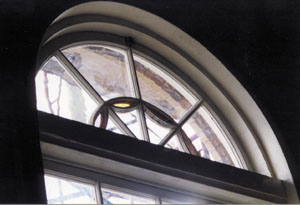 Condensation A lot of moisture problems aren’t as obvious. These more insidious problems are caused by condensation. This can, in fact, be more of a problem in today’s new homes than in older homes, due to the total closure vapor-barrier methods used in much of today’s construction. This type of construction often creates a closed air-circulation situation. In fact, the problems with mold inside homes and its related health concerns has increased greatly in recent years.

Regardless of whether yours is a new home, or tighter, older home, proper ventilation is important to prevent condensation. Crawlspaces must have proper ventilation. These consist of foundation vents covered to prevent pests from entering. You may wish to have a means of blocking them off during the winter in extremely cold climates, but make sure they are open the rest of the year. Eave or soffit vents are also extremely important, as are gable vents. Free air circulation must be allowed for all air spaces. Cupola vents are also used in some buildings. These days purchased metal roof vents and ridge vents are commonly used. Regardless, the openings for ventilation should be at least 1/300 the total square footage of the ceilings. In addition a vapor barrier should be used on the top story ceiling of the building. All vents must be screened to prevent insects from entering the building. Proper insulation can also prevent condensation buildup. 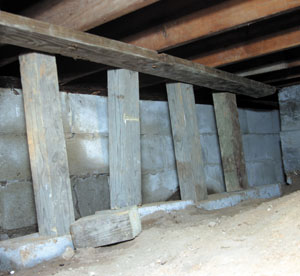 In the case of damaged structural members, you may need to consult professionals about how to repair. Temporary bracing of rotted floor joists is shown here before a full-scale bracing and repair job.

Mechanical movement of air with attic fans can also help prevent buildup of condensation, especially in extremely humid areas. Ventilation fans in basements, bathrooms, laundry rooms or any areas that constantly receive moisture can be a great help as well. A dehumidifier installed in a basement can cut down on some of the problems.

Shrubs and vines growing against side walls, and trees overhanging and fully shading a house can also create moisture problems and eventual wood rot. Simply trim them back to allow increased air circulation around the house.

Sometimes wood that is infected with fungus can be saved if you catch the problem quickly enough and the source of moisture is eliminated. Some damage may be fairly easily remedied, such as replacing rotted soffit, eave boards or fascia. Replacing rotting roof sheathing is a bit more of a problem, requiring tearing off the shingles, installing the new sheathing and then reshingling. Rotted window and door frames also normally require total window replacement. And then there’s structural damage, such as floor joists, sub floors, ceiling joists and even studs that may have their bottom ends rotted. In some instances, sound new boards may be “scabbed” or fastened to the rotted boards to provide strength after raising the supporting boards with jacks. But, make sure the moisture is gone before installing new boards or you simply lock the moisture between the two, resulting in further rot problems. If in doubt about the structural integrity of the construction of the building, it is wise to have a building inspector look at the problem. Most often in case of structural wood replacement, it’s expensive and also often quite challenging, requiring professional help.

Unchecked moisture and the resulting fungus can not only create structural and interior wood damage, but also damage books, clothing, carpeting, wall coverings and furniture, as well as produce a musty odor. Don’t let it rot. Make it a yearly affair to inspect for possible rot problems and correct them as soon as possible.