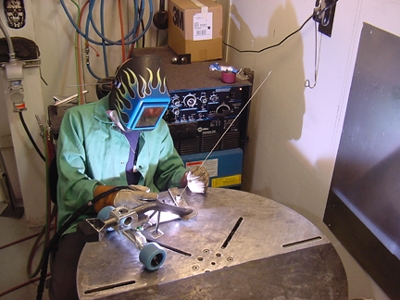 Weekend warriors they are not. By day, Scott Holsenback and Doug Anderson weld at Delta Airlines’ Technical Operations Division at Hartsfield International Airport in Atlanta. The rest of the time they can either be found burning down the Georgia asphalt at 80 mph – or preparing their street luge for it.

Ranked fourth in the world by Extreme Downhill International (EDI), Holsenback is one of the world’s premier street lugers. Anderson just turned professional. Together they form BodRodz, a small operation out of Fayetteville, Ga. that builds some of the slickest street sleds this fledgling sport has seen. Whether at work or play, quality welding technology is critical. They have found the consistency they desire in the Syncrowave 250 DX AC/DC TIG welding system from Miller Electric.

Holsenback first caught the itch for street luge after seeing it on the X-Games, an Olympic-style festival focusing on “extreme” sports like snowboarding. Two years later, a chance conversation at work led him to Anderson, who was building sleds and testing them on nearby foothills.

“He said to me, ‘Dude, if you want to go ride, I’ll call you,’” recalls Holsenback of his first meeting with Anderson. “Sure enough, two days later he called me. I knew within 20 feet of rolling down that hill that this is what I wanted to do. The very next day, I started building my own luge.” 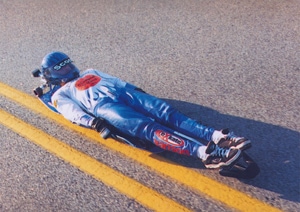 Street luge is a high-intensity sport that suffers from a number of bumps in the road, and we’re not talking about the asphalt. The lack of corporate backing and training facilities, however, hasn’t stopped it from being a featured event at past X-Games and a focal point of the Gravity Games, an extreme sports battle held this year in Cleveland and New York.

These obstacles never concerned Team BodRodz. Anderson and Holsenback wander the foothills of northern Georgia at the crack of dawn (minimal traffic) and frequent seldom-used back roads to test their boards. This type of commitment has paid off. Holsenback, the sport’s 2000 amateur champion, has raced all across the United States and as far away as Cape Town, South Africa. A lot of hard work goes into getting to the top in this sport. The quality of your sled is a key element to that success. If you’re thinking that all you do is lie down on a soupped up skateboard, push and say a prayer, you’d be wrong.

Building a sled isn’t as easy as it sounds. Anderson estimates that he sinks 50 to 55 hours into each one. The main body is a raw sheet of 6061-T6 aluminum bent in three spots on each side to give it a pan shape. Sizes and dimensions vary, as each sled is custom fitted to the individual rider. EDI regulations say the sled can be no wider at any point than the widest point of a luger’s shoulders and no longer than 10 feet. Sleds built by the BodRodz team are about 6 ft. x 18 in., humming over the pavement with a tight 1-1/2 in. clearance.

The main body’s supports, head and foot rests and support tubing for the chassis are bent out of 4130 chrome-moly ranging from 1/16 in. to 1/4 in. thick. The handles are 304 stainless. No welds are made to the actual aluminum pan. All tubing is welded to a plate, which is then bolted to the pan. Rolling power is provided by urethane wheels, similar to those found on a skateboard, mounted on three separate axles.

“We hand fit every piece on a sled,” says Anderson. “We lock each plate down in a jig to make sure that the fit is as tight as possible so it can’t pull. This particular machine (the Syncrowave 250 DX) allows me to make the welds as small as I can while still getting excellent penetration. Cosmetically, you can make it look like your stacking dimes.”

Holsenback speaks more to the importance of control: “We have these runners (tubing that supports another tube) that have a 1/16 in.-thin wall. By the time you’ve ground the edge to fit, you’ve already removed a good chunk of the material. When you sit and weld, you don’t want to blast the thing to pieces. I haven’t had that problem with this machine – whether on aircraft engine components or on a street luge.”

“I’ve been welding for over 20 years now,” adds Anderson. “ This is my favorite tool. You always have the same feel. It never comes on too hard, and I’m fairly confident it could weld anything from razorblades to the Golden Gate Bridge. It’s worked that well for us.”

Kids, Don’t Try this at Home

While neither man has actually welded razorblades, or the Golden Gate Bridge for that matter, they know racing and they know welding. Team BodRodz is gearing up for a run at the street-luge world record for speed: 81 mph (racing speeds rarely exceed 65). Holsenback has unofficially broken it at 89.7 mph and will pilot the sled for the record-breaking attempt.

It should be noted that BodRodz custom street-luge sleds are not available in stores or anywhere else. Boards are constructed strictly for “Scootball” and “Tinman,” Holsenback’s and Anderson’s respective nicknames. Both men are experienced racers who first sought out the help of others who knew the sport before they built a sled and launched themselves down a hill. What they did bring to the table right from the start was an extensive knowledge of welding techniques that helped them build some of the fastest sleds in the sport. In Scootball’s own words:

“Doug and I have a rule that we try and break down the competition by just showing up with our board. When they see something with that much “gee-whiz” factor, the head games have begun. They know we’re here to be serious.”