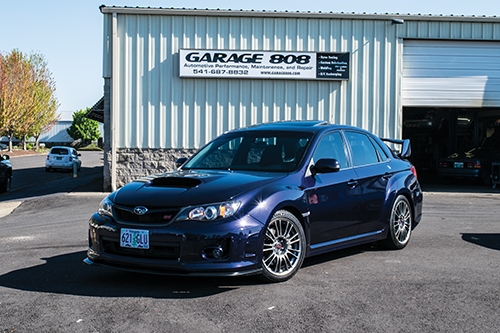 Mention Subaru’s STI to auto enthusiasts and the reaction is often the same: “That’s a fun car to drive.” Iconic rally images of this car tearing up stages in international competitions fuel the imagination of Subie enthusiasts, but owning one is not just a dream for many, because a reasonable price makes the WRX STI one of the best values in a performance car.

The turbo-charged STI features solid low-end torque and plenty of top-end kick with the turbo spooled up. It also has upgraded brakes and good quality suspension right off the showroom floor. What’s missing is that classic “Subaru rumble,” because the stock exhaust is a bit too tame. This calls for an aftermarket exhaust to improve performance and to get that classic Subie exhaust note. Enter Corsa’s excellent cat-back upgrade for the STI.

Every Corsa Performance Exhaust System we’ve tested has provided a solid blend of performance, great exhaust note under acceleration, and droneless cruising sound. We expect this Subie version to live up to the Corsa standard for sound engineering and quality build.

The numbers this stock STI produced on a dynometer were definitely in line with other stock STIs from this generation tested on the same dyno.

I noticed from the comments I heard at the garage that the exhaust arrived in better-than-usual packing materials. Some exhaust systems are simply thrown into a box and arrive pretty beat up. The Corsa system was well protected, and components were kept separate in foam.

Typical of most cat-back installations, after removing the connection between the catalytic converter and the resonator, the rest of the stock system came off by simply releasing the exhaust hangers. We could then compare the two exhaust systems.

Yes, in this case, bigger is better. Once the stock exhaust was on the shop floor with the new Corsa system, it was easy to see that the difference in pipe diameter was going to mean better exhaust flow.

The Corsa system went on without a problem. Clearances, clamps and hanger positions worked flawlessly, and the tips look great with subtle Corsa logos visible in the right light. 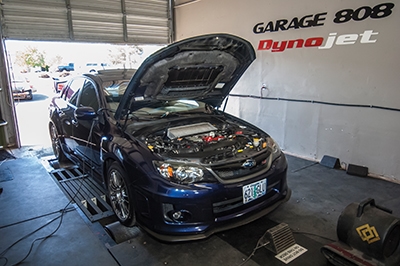 Before doing any wrenching, we strapped the STI on the AWD Dynojet at Garage 808 for some baseline numbers. This is the best way to find out if a performance upgrade produces results. Under these controlled conditions, it’s pretty easy to see the numbers, especially for clients viewing the read-outs of the flat screen in 808’s comfy dyno observation room. 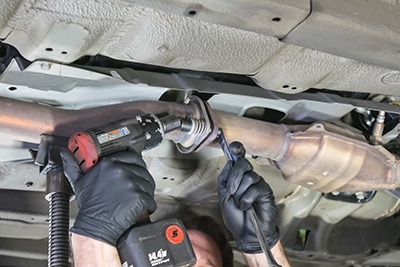 Removal of the old system was straightforward. After supporting the pipe, my son Tim removed the nuts and bolts at the connection between the catalytic converter and the resonator. 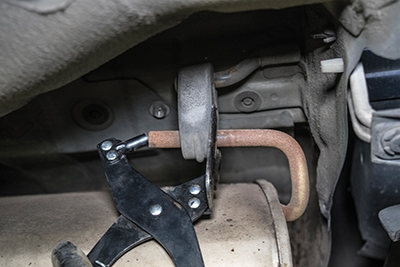 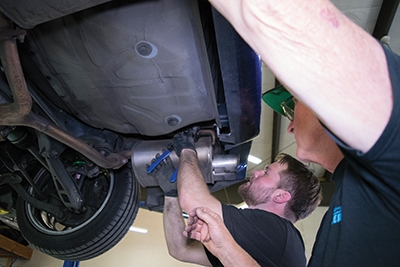 Tim got an extra set of hands to help support the mufflers as he removed the last exhaust hanger. 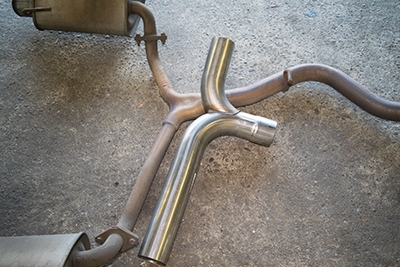 You can really see the difference in exhaust size with the stock exhaust up next to the Corsa System. 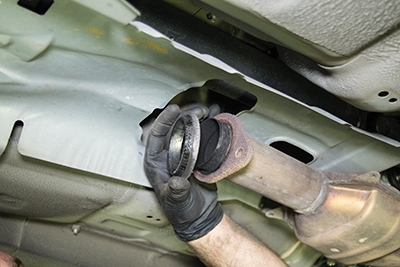 We had to remove this stock donut-shaped gasket, which did not get used in the Corsa installation. 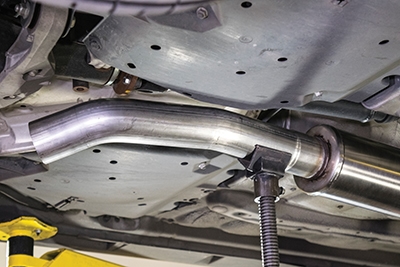 We found something to support the section behind the resonator before lifting the first section of exhaust. 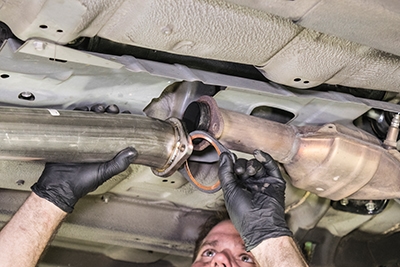 With the rear end of the resonator section supported, Tim lifted the front end into place while inserting the flange gasket that came with the Corsa kit. 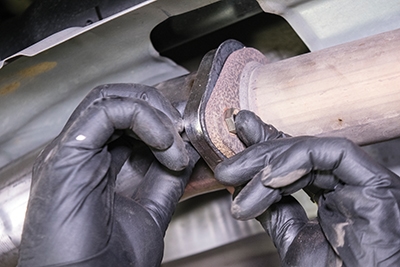 He put the supplied bolts and nuts in the flange connection and hand-tightened them. 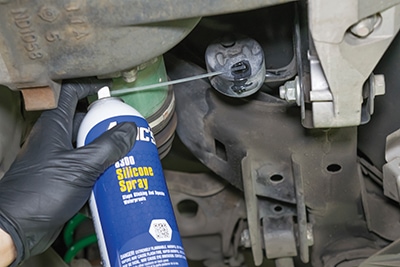 We shot some silicone spray into the hanger holes before installing each section of exhaust. 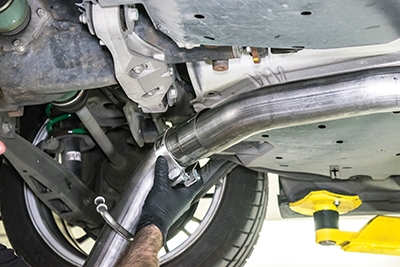 Tim put the clamp on the axle pipe (aka S-pipe) before sliding it onto the resonator outlet and rolling it up into position to align the hanger components. 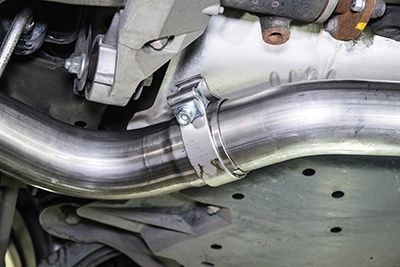 We left the clamps somewhat loose to be tightened and torqued to spec after final alignment and clearance checks. 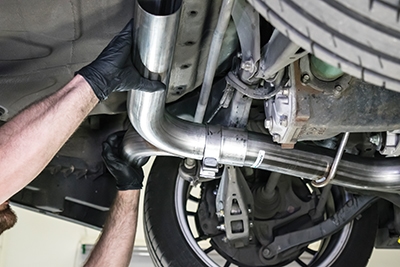 Next on was the Y-pipe with the longer section to the passenger side. 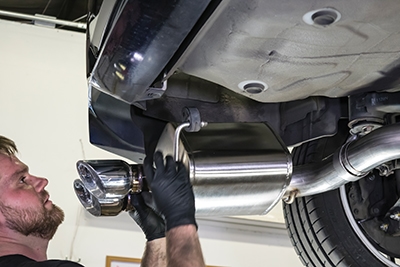 Tim took the rubber exhaust hangers off the car and installed them on the rear muffler assemblies before lifting them into place. 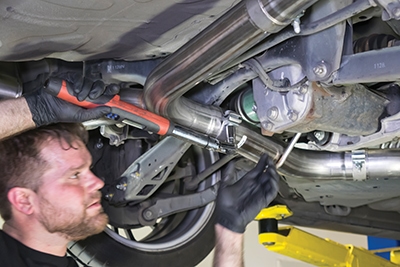 After getting all of the components in place and checking clearances and alignments (including how much exhaust tip protrudes past the bumper on both sides), we torqued the clamps to spec. 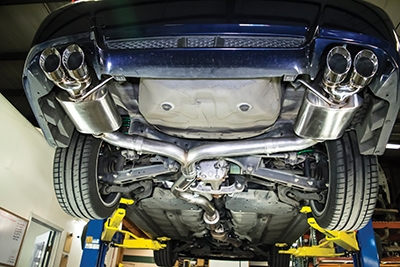 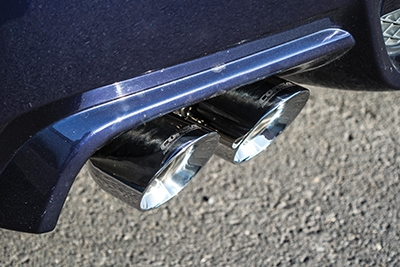 Polished stainless exhaust tips hint at an upgrade that is much more than cosmetic. The owner loves her new exhaust, but she says her fuel economy may suffer for a while as she gets into the throttle to hear that powerful new sound.