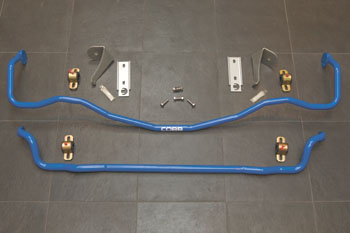 When my friend Michael opted to buy the more luxury oriented 2005 Legacy GT Limited rather than the sportier Impreza STI, he lost out on some of the crisp suspension that comes on the rally inspired model. That’s why he contacted Cobb Tuning.

Cobb Tuning has specialized in Subaru Performance parts and tuning since before Subaru even brought over its Turbocharged Impreza WRX model from Japan. With years of experience fine-tuning the required upgrades to reduce body roll and decrease understeer that plagues many factory cars, their tubular anti-sway bar kit not only enhances handling but also is lighter than its stock counterparts.

Stabilizer bars, anti-sway bars or anti-roll bars, no matter what they’re called, serve to keep the car flatter in a corner to improve traction. Body roll is bad. It tends to load up the outside tires of a vehicle, reducing traction and messing up steering. The anti-sway bar makes the suspension less independent. Sharing the suspension load from the outside tires, the sway bar transfers weight to the inside tires, which means better traction. When the sway bar is too rigid it transfers bumps on the road from one side to the other. This negates too much of the independence of the suspension for both traction and comfort. So a well tuned bar tries to find a balance for “real world” road conditions.

Michael took an extended road trip right after the install, but his initial report indicated improved handling, flatter cornering and less push in the corners. And since he’s putting on the miles across the Southwest, we’re guessing he’s glad it’s in his modded Legacy. 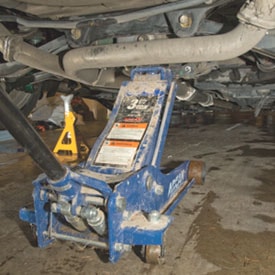 If you’re not blessed with a shop equipped with a lift, you can use a floor jack and jack stands to support the vehicle (check your vehicle’s owner’s manual for proper locations).

Tackling the rear bar first, we began by removing the rear sway bar endlinks. This takes two 14-millimeter wrenches—one to loosen the nut and the other in between the sway bay and endlink to keep the stud from spinning. 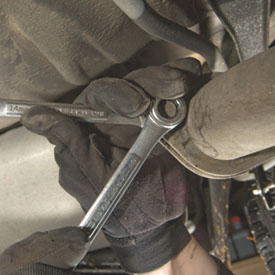 While you have the wrenches handy, remove the two bolts securing the driver’s side muffler to the Y-pipe. Allow the muffler to swing up out of the way. 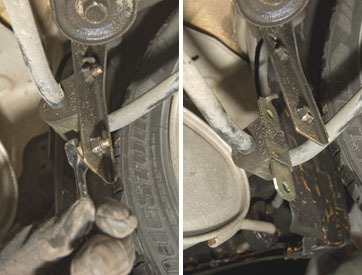 Left: Using a 12-millimeter ratchet, remove the bolts holding the stock sway bar bushing straps (two on each side).

Right: Note the orientation of the sway bar while removing the bushings. Keep track of the bushings so you can mimic their location on the new Cobb sway bar. 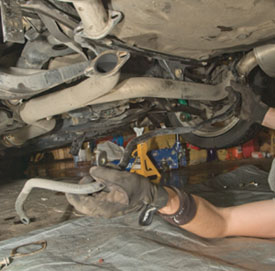 Snake the sway bar around the exhaust on the passenger side, taking advantage of the extra room on the driver’s side you freed by moving the muffler earlier. 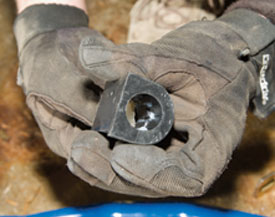 Liberally apply the supplied grease to lubricate the new, stiffer bushings (make sure to use the smaller 7/8-inch diameter bushings for the rear). Future lubrication using non-lithium grease can be applied using the zerk fittings. 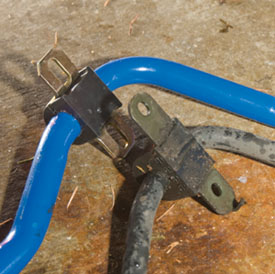 The tubular design of the Cobb anti-sway bars allows their larger aftermarket bars to still be lighter weight. Note the similarly placed bushings. 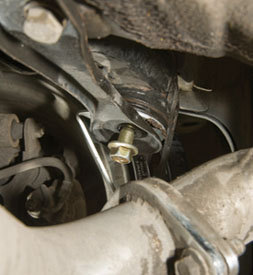 Leaving the 19-millimeter loose, the brackets should line up with the stock holes. The reinforced brackets help handle the extra forces the larger sway bar applies to the suspension. 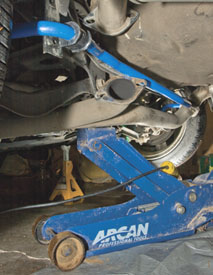 Slide the Cobb sway bar into position, keeping the angles needed with the stock sway bar in mind. The aftermarket cat-back exhaust system we installed earlier added a little extra challenge because of its extra tubing size. 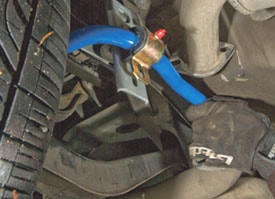 Install the other bracket with the concave side towards the rear, and move the sway bar bushing strap into alignment with the other holes. 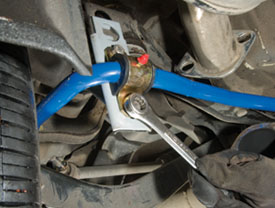 Using the provided bolts, washers and nuts, secure the bushing straps and torque the bolts and nuts to approximately 35 foot/pounds. 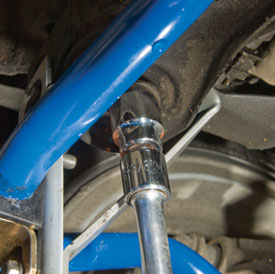 Torque the 19-millimeter sub-frame bolts to approximately 100 foot/pounds once the other brackets are aligned and tightened. 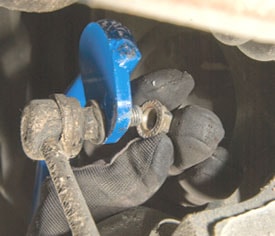 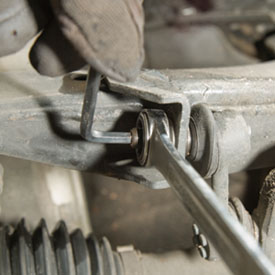 The front endlinks require a 14-millimeter wrench and a 5mm allen wrench for removal. The stud, which the 14mm nut is around, has an allen hole on the end to prevent it from free-spinning during removal. 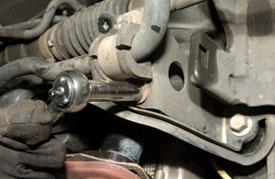 Remove the factory bushing straps. Be careful to support the sway bar to prevent it from falling, and note it’s orientation below the tie-rod ends. 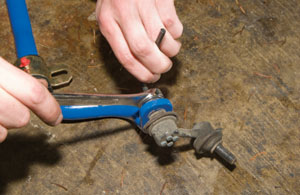 Using the wrench and allen combination again, install the endlinks to the Cobb sway bar. Grease and arrange the bushings and straps on the new bar. 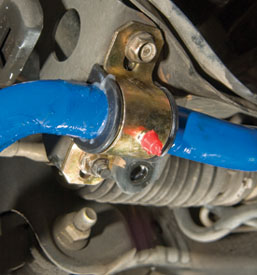 Reusing the factory bolt and nut, install the sway bar, ensuring that it’s rotated correctly and not installed upside down (the arches go under the steering tie-rod ends). 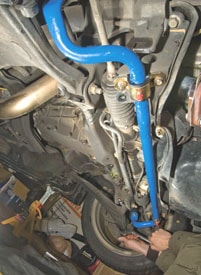 Reinstall the front endlinks. Torque to approximately 40 foot/pounds, and for extra insurance that the nuts will not loosen, apply Loctite to the stud threads before tightening. 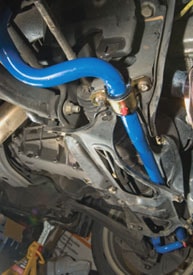 Replace the sub-frame brace. Reinstall the bolts loosely, then torque them to about 55 foot/pounds once they are all threaded.