There was a unique moment this past August when Gail Jones felt chilly in her Houston, Texas, home. The thought made her laugh out loud.

During the previous summer, Jones and her family sweltered in their 2,800 square-foot, two-story home. Fans ran constantly in every room. Windows were blocked to keep out the sun. Energy bills soared higher than the sizzling outdoor temperatures. All that changed when the Jones family was selected to receive an Energy Savings Makeover organized by Houston radio show host Gary Parr.

“We selected this home because it represented a typical Houston area house that would truly benefit from an energy savings makeover,” says Parr, host of the On the Air radio show. “This family of six was spending more than $900 a month on energy bills during a typical summer. That’s because the home had little insulation, an inefficient HVAC system and old, single-paned aluminum-framed windows.”

Parr started by asking listeners to his show to submit their homes for consideration of the makeover project. More than 800 entries flooded his office. “Our goal was to identify a typical home that could be transformed by receiving a house full of energy-efficient Simonton replacement windows, a new Ruud HVAC system and tankless water heater, a Honeywell programmable thermostat, Knauf insulation, Attic Breeze solar attic fans and other energy-efficient features,” says Parr. “I went into this project wanting to showcase how an energy-efficient home could cut a homeowner’s energy bill by at least 50 percent.”

Following a 45-day installation schedule that included a full attic renovation, the Jones home more than met the goal. The first month’s energy bill following the energy upgrades came in at $344—down from $943 for the same timeframe the previous year. 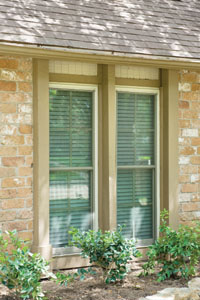 Before any changes were made in the Jones home, Parr supervised two energy audits of the house. The first was conducted by the Energy Systems Laboratory at Texas A&M University. They made recommendations based on their research and a visit to the home, and are conducting ongoing audits throughout the year to provide energy savings details and figures.

Direct Energy, one of the largest multi-state providers of retail energy services in North America, also did a comprehensive Home Energy Rating System (HERS®) energy analysis on the home’s design and made recommendations for improvements. On a scale of 1 to 200, (with 200 being the most inefficient rating), the Jones’s home rated a 195 prior to the renovations. Following the renovations, the home ranked 75, which is 10 full points lower than an Energy Star-qualified home.

“From all accounts, this energy makeover was a complete success,” says Parr. “The family’s July 2008 electric bill was about $750. A year later, after the radiant barrier and attic fans, vinyl replacement windows and HVAC system were installed, the bill, was just $319—and it was 12 percent hotter during that time in 2009 than the previous year!”

What made a significant impact on the energy efficiency of the Jones’s home? The replacement of 20 old aluminum windows with new, energy-efficient Simonton vinyl windows certainly made an impact.

“We had the old windows completely covered to prevent the sun’s powerful rays from baking the interior of our home,” says Jones. “Other windows were inoperable, so we didn’t have enough ventilation. The nightmare was solved the day the Energy Star-qualified windows were installed.

“We’ve got a full house with our four adopted children running in and out. The house was so hot last year that they slept on the living room couches because their bedrooms were too hot.”

Parr and his team solved that problem by selecting Simonton vinyl replacement windows with Energy Tax Credit (ETC) glass packages for the home. “These windows are certified by the National Fenestration Rating Council to meet a U-factor rating of 0.30 or less, and a Solar Heat Gain Coefficient (SHGC) of 0.30 or less,” says Parr. “These are the energy ratings stated by the U.S. government that are required for homeowners to take advantage of the $1,500 energy tax credit as part of the American Recovery and Reinvestment Act of 2009. This incredible glass package, combined with the fusion-welded, energy-efficient vinyl frames, started improving the quality of life for the Jones family from the day they were installed.” 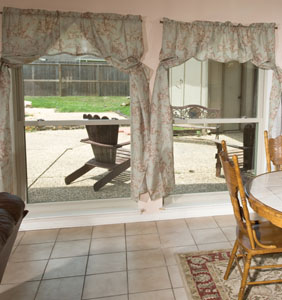 According to Parr, the vinyl windows paid for themselves immediately. Because the windows are so energy-efficient, the Jones family was able to eliminate the need for a second air conditioning unit. That purchase would have been upwards of $10,000. The cost of the windows and installation (not including the $1,500 tax credit) was approximately $9,500.

“This is the fastest return on investment I’ve ever seen,” says Parr. “The replacement windows are so efficient in helping control the home’s energy costs that the purchase of the second air conditioning unit simply wasn’t needed. So, the vinyl windows more than paid for themselves from the first day they were installed.”

As an extra benefit, the Jones family had the option of selecting interior stylizing on their vinyl replacement windows. They were able to choose from a variety of rich, durable and scratch-resistant woodgrain laminates and popular hardware finishes in the Decorum by Simonton collection.

“Working with the Norandex branch in Houston and Hightower Construction made this window replacement project one of the easiest aspects of the Home Energy Makeover,” says Parr. “The original, poorly-insulated windows gave the Jones family hefty energy bills, faded carpets and furnishings, and an uncomfortable living environment. With the Energy Star-qualified Simonton vinyl windows, the family saw an immediate savings on their energy bills and a distinct improvement in the living quality of the home.”