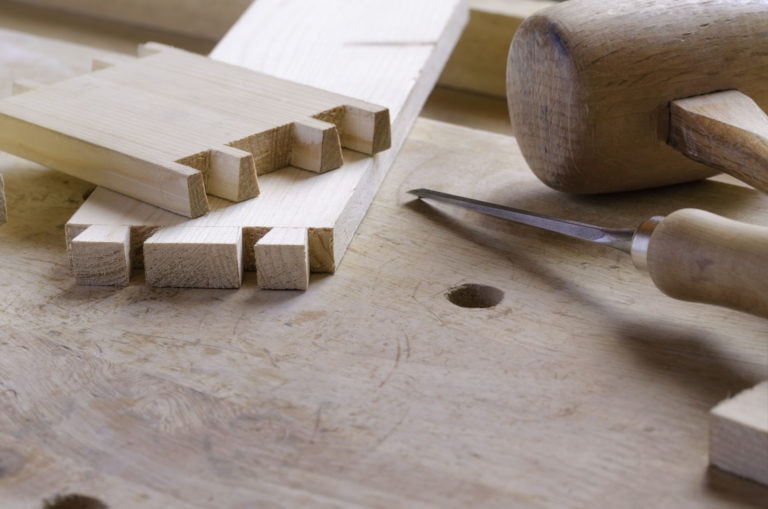 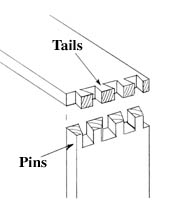 Dovetails can be cut using hand tools or power tools. In either case, cutting dovetails is precision woodworking, and this is especially so when cutting them by hand. Use only top-quality bench tools and make sure they are sharp. For hand tools you’ll need a woodworking vise to hold the stock, a thin bladed dovetail or backed saw, woodworking chisels, a mallet, a marking gauge and a dovetail gauge. The tools shown are high-quality tools available from Woodcraft Supply Company.

The first step is to mark the thickness of each piece of wood on the other with a marking gauge. Do not cut deeply into the wood with the gauge. This will be the bottom of the dovetail cuts. Then mark the cuts for the dovetails on both sides of the stock and also on the end. This can be done with a straight edge, ruler and pencil, but a dovetail gauge makes the chore easier and more precise. Once the dovetails are marked, mark X’s on the wood portions to be cut away. This prevents confusion when you start removing material between the dovetails. 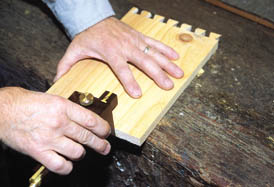 Mark the depths of the dovetails using a marking gauge. 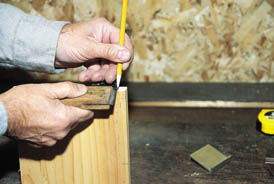 Use a square to mark the outer width of the dovetails on the edge of the board. 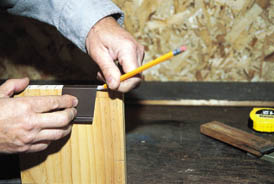 The angle cuts of the dovetail are marked with a dovetail gauge.

Place the work piece in a woodworking vise, angled so the saw can be held upright. Then use the back saw to cut down to the lines marked by the gauge. Cut just on the outside waste side of the lines, and down exactly to the depth marked. 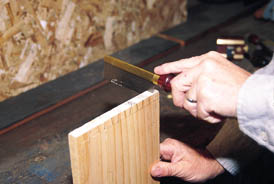 Use a small back saw or dovetail saw to make the angled cuts.

Then use a very sharp chisel, the exact width of the inner line at the gauge line, to chop the wood away between the cuts (shown at the top of this article). A smaller chisel can also be used for this, by re-positioning it to make the cut, but the cut won’t be as clean. Cut from both sides of the stock to prevent splintering.

Position the second piece over the first and mark the locations of the dovetails on it. Then cut in the same manner. Finally, try-fit the joint together and use a very sharp chisel to slice away the sides of the cuts so the joint fits snugly in place. Once the joints fit correctly, repeat the operation for the other corners of the box, drawer or case. Once all joints are cut and you’re sure they fit properly, apply woodworking glue and clamp the assembly together, making sure the assembly is square. 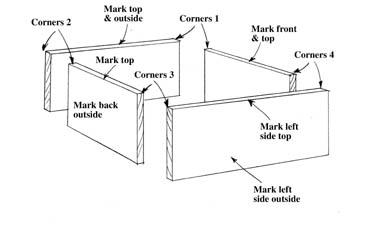 Half-blind or half-lap dovetails are a bit more complicated. The exposed portion is cut in the same manner as the exposed dovetail joint, except the dovetails are not as deep as the thickness of the piece they are to be joined to. This allows for a lap to cover the ends of the dovetails. Cut the exposed dovetail piece, position it on the non-exposed piece and mark the dovetail locations. The blind dovetails have to be cut entirely with a chisel. The first step is to make the back cuts, then side cuts and finally the end cuts. Try fitting the pieces together and shaving off pieces of wood until you achieve a nice, snug fit. To finish, glue and clamp. 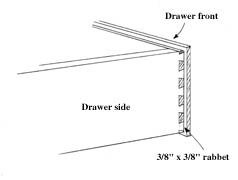 Rabbeted, half-blind dovetail joints are also used on drawer fronts — those with a 3/8-by-3/8-inch rabbeted lip.

A double lap dovetail is used to completely conceal the joint. In this case the inside piece is cut using a chisel in the same manner as for the half-lap. Then a rabbet is cut on the edge of the outside stock. The inner edge is marked for the dovetails and they are cut using a chisel. One of the most interesting joints is the secret miter dovetail. First cut dovetails with a chisel, then saw a 45-degree miter each edge, down to the top and outside edges of the dovetails.

Decorative boxes can be constructed using two different types of wood to show off the dovetail joints.

Dovetails can be cut very easily and precisely using a router and a dovetail jig. The Craftsman Professional Dovetail Box Joint System enables you to use a router to produce some of the most popular and most used joints for decorative boxes, hope chests, trunks and cabinet-case construction. Templates in the Craftsman system include: 1/2-inch, half-blind flush dovetail; 1/2-inch, half-blind flush offset joints; and 1/2-inch, half-blind rabbet dovetail joints. A template to cut exposed or through dovetail joints is also included. This fixture accommodates boards up to 16 1/2-inches wide and 1 inch thick and features an exclusive pair of sliding clamping bars with over-sized locking knobs that assist in sizing up, then securing work pieces for cutting. The fixture’s box joint template set includes two 3/8-inch thick box joint templates.

The dovetail jig comes with two guide bushings, a .40 and .05 diameter. The first step is to follow the instructions to install the guide bushing on your router base with the jig. The jig should be securely fastened to a workbench. This can be done with wood screws, or by fastening the jig to a wooden board that can be C-clamped to the workbench. Place a dovetail bit in the router and adjust for the depth of cut.

The two pieces to be joined are then clamped in the jig, positioned against the stop blocks. Note the vertical piece fits flush with the top of the horizontal piece. It’s a good idea to first make trial cuts with scrap stock, especially if working with expensive hardwoods for the final project. 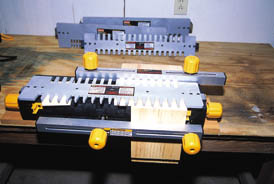 When using the Craftsman dovetail system, first clamp down the workpiece with the proper jig in place.

Use the router with a dovetail bit to make the cuts. 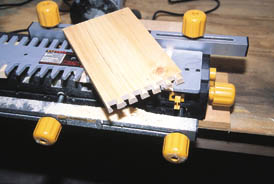 Following are the instructions for creating open or through joints with the Craftsman Dovetail System.

The front and back of the projects (pin pieces) must be between 3/8-  and 1-inch thick. The sides (tail pieces) must also be between 3/8- and 1-inch thick. Cut the front, back and sides to the proper length, width and thickness. Make sure all surfaces are smooth and square with all adjoining surfaces. Line up the work pieces on a flat surface, standing them on edge. Use a soft lead pencil to mark the tops and outside surfaces of the all pieces. Number the corners as shown. Back-up boards should be made of scrap wood to minimize the splintering of project pieces during the routing

Back-up boards will also prevent the router bit from cutting into the dovetail base.

To make the cuts

4. To ensure a smooth and uniform joint, retrace the cut from right to left, again keeping the guide bushing firmly against the template.

5. Remove the work piece and back-up boards from the dovetail fixture.

6. Repeat the steps for corners 1 and 3, but position the work pieces on the left hand side of the dovetail fixture.

7. Repeat the steps for each board, placing the boards in the jig with the numbered corners left or right per the jig instructions. 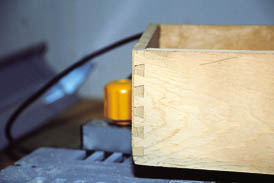 Creating half-blind joints is similar, except the half-blind dovetail template must be used.

Regardless of whether cutting by hand or with power tools, creating dovetail joints are fun, challenging and a great way to show-off your woodworking skills.