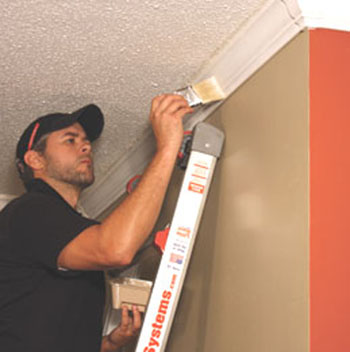 Tools and materials that make it easier and faster to install crown molding.

Crown molding, also spelled “moulding,” is probably the most prominent architectural trim element in a home’s interior decor. Crown creates an appealing transition from wall to ceiling that is available in a wide variety of styles and profiles, from simple and economical cove molding to elaborate cornice molding that is built up from multiple shapes and pieces to create a detailed ornamental accent.

Crown molding dramatically enhances the overall interior design, but installing it can be tricky. The project requires lots of measuring, lots of nailing, and tricky applications such as cutting the molding “upside down and backwards” on the miter saw. This article will show how to install paint-grade crown molding using a variety of new tools and materials that make the job as painless as possible.

In the past I’ve installed a crown with nothing more than a tape measure, but it wasn’t easy, especially when working alone. Without a helper, measuring from one corner of a wall to the other is a real pain: It requires tacking one end of the tape to the opposite wall, then hauling your stepladder to the other corner, pulling your tape tight and hoping the nail at the other end doesn’t jerk away from the drywall. Assuming the nail holds, you then wrestle with the tape to straighten out the inevitable twists and sags so you can eyeball what you hope is close to an accurate measurement. Even measuring with an assistant on the other end of the tape is not as easy as using one of the new precision laser range finders on the market.

For this project, I used the new Bosch DLR165K Digital Laser Range Finder. Here’s what’s involved with taking an accurate wall-to-wall measurement using the kit: Point. Press button. Done. Talk about an irreplaceable time saver and the best friend of the solo worker, the DLR165K is among my new favorite tools for crown installation and much more. With a range of 165 feet and accuracy to within 1/16 inch, the DLR165K uses a laser pointer to aim the tool at the spot to be measured. Then, with the push of a button you have the exact measurement recorded in digital readout, and you’re ready for a trip to the saw to cut the molding to match. And the measurements are always true, unlike those unreliable (and useless) sonar range finders of yesteryear. The DLR165K measures in feet and inches, decimal feet and metric, and can calculate area and volume (www.boschtools.com).

As I mentioned, I often work alone. So, in the past I’ve improvised an ill-advised method of hanging lengths of molding that involves nails placed along the ceiling and lengths of string looped around the trim sticks. The idea was to hook the string on the nails in order to temporarily hold the trim at the ceiling while I zapped it in with a nail gun. Well, that took extra time, and I always had great difficulty hooking the strings to the nails. And once hooked, the strings had a tendency to then come unhooked, with the molding crashing to the floor. And even when it did work, the stick of molding was still never positioned exactly where I wanted it.

Thankfully, Magna Industries offers another must-have item for the solo crown installer—Crown Hangers. When you have no extra hands to hold the molding while you nail it, the Crown Hangers can serve as a substitute. Simply tack a couple of nails about 6 feet apart just below the ceiling. Hook the Crown Hangers on the nails—they’re sold two per set. Then, hang the stick of molding on the two brackets. You can then adjust each of the hangers by sliding the brackets upward and finger-tightening with a lock nut, which positions the molding against the ceiling, ready for fastening. It’s like having a silent, underpaid assistant (www.crownhanger.com). 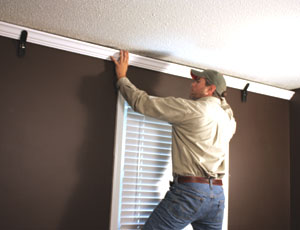 Nail it Fast and Easy

Although the patient installer can certainly hang crown molding with a hammer, finishing nails and a trusty nail set, I am not a patient installer. I’m a firm advocate of pneumatic power and a reliable nail gun. Compared to slinging a hammer, nail guns operate at light speed, they spare you the problem of bent nails and smashed thumbs, and they’re simply easier to use by having the collated nails loaded in the chamber rather than requiring repeat trips to a box of singles. 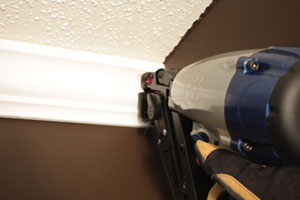 Campbell Hausfeld’s new 2-1/2-inch finish nailer comes with some nifty features to expedite a molding project for the DIY homeowner. At the nailing tip, the gun features a built-in laser marker to help with accurate nail placement. 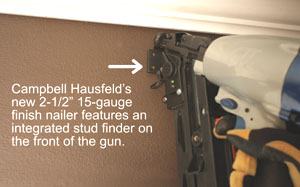 To adequately support crown molding, the nails must be fastened into the wall studs, and Campbell Hausfeld’s new finish nailer also features an electronic stud finder integrated into the gun to locate the framing members. I also like the soft no-mar tip that protects the tip of the gun—which must be pressed against the molding to activate the nailing action—from leaving those annoying little dents in the surface that many other air nailers create. 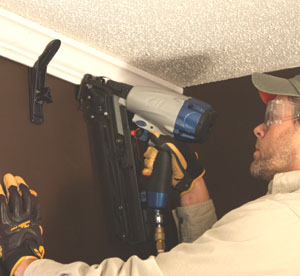 The new 2-1/2″ Campbell-Hausfeld  nailer won’t dry-fire, meaning the gun won’t leave an unnecessary hole in the molding when it runs out of nails. This means less repair work spent filling holes and sanding the filler. 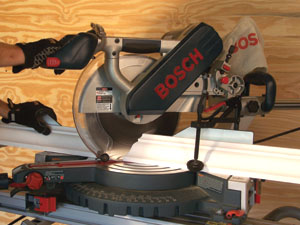 The traditional method of cutting crown molding is a bit of a mindbender. When cutting crown molding on a miter saw, you typically have to cut it upside-down and backwards, so the saw’s base represents the ceiling and the saw’s fence represents the house wall. With 45-degree inside corners, the cut should be made so the lower, longer point of the molding (when positioned on the wall) meets the mark you made for the molding strip’s overall length. For outside corners, the opposite is true. If you’re already confused, then you’ll probably make a mistake when cutting and those mistakes not only waste molding but also time. 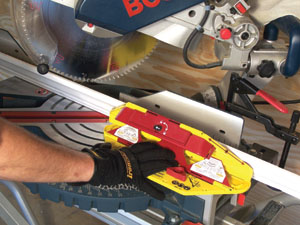 Fortunately, the EHT staff discovered a new jig for the miter saw that allows installers to cut crown molding upright, just like it installs on the wall. The new “right side up” cutting orientation of Milescraft’s new Crown45 jig greatly simplifies crown molding installation. It features an adjustable angle setting with accessory angle finders to find and set the appropriate spring angle for the most common molding styles (38, 45 and 52 degrees). There’s also an indented cutting face to accommodate detailed dentil-style molding. The wide cutting surface can handle moldings between 2 and 5-1/2 inches, and the jig collapses for compact, easy storage. The Crown45 simplifies an otherwise convoluted cutting application (www.milescraft.com). 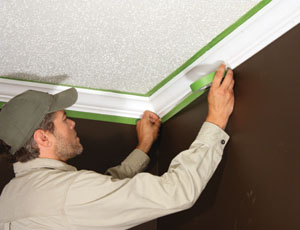 Quality Tape for Peace of Mind

Choosing a quality tape is one of those details that DIY painters often overlook. I’ve opted to use cheap tape in the past, and in doing so I’ve spent a lot of extra time and paint correcting the problems caused by paint bleeding through the poorly sealed mask. For this project we used Frog Tape, which is a specially formulated painter’s tape that forms a chemical bond with the wall surface. Using Paintblock technology, Frog Tape is a patented crepe tape that forms a micro barrier along the edges of the paint when it comes in contact with latex paint. Unlike standard masking tape, which can easily lose its adhesion, the edge barrier of the Frog tape prevents bleeding for crisp, clean paint lines. Frog Tape is available in 24-, 36-, and 48-millimeter widths (www.frogtape.com).

The ability to skip the entire mitering process for crown molding is an enormous time-saver. Fypon offers a miterless crown molding system that utilizes corner blocks instead of miter cuts at each joint. This means the installer only has to make square cuts on the molding, so there’s no need to measure an angle, no need to think “upside-down and backwards,” and each cut can be made with the molding simply placed flat on the base of the miter saw. With this system, you can even cut the molding with a miter box and a hand saw (www.fypon.com).

Additionally, as an alternative to wood, the Fypon miterless system is made of urethane, which resists mildew, insects, warping and splintering, so it can be used indoors or out. And, although we used the system for an indoor application, urethane still has its benefits. Each piece has a consistent quality and finish that requires no additional priming or sealing. In fact, each piece comes pre-coated with a double-primed, exterior-grade ultraviolet stable coating. It can be painted, stained and faux finished, and the material is lighter and more flexible than wood trim, so it’s easier to maneuver the sticks around the jobsite, especially if you’re working alone.

To install the miterless system, begin as usual by drawing a simple layout of the room and calculating the quantities of materials you’ll need. Pay specific attention to the corners because when ordering you must specify the exact number of corner blocks, and whether they should be oriented as outside or inside corners.

With the materials on site, begin one run of molding by applying a bead of urethane-based construction adhesive to the rear and upper surface of the corner block. Press the block into position at the wall/ceiling transition and nail it securely through the recessed areas of the corner piece. Proceed around the room installing all the inside and outside corner blocks in the same manner.

Next, measure the lengths of molding that fit between the corner blocks. To ensure a snug fit, add 1/8-inch to every 5 feet of molding. Check the fit before installing. Position the molding so it closely follows the profile of the corner block, which is slightly larger than the molding to leave a unifrom reveal at the transition. Each block should appear as a slightly larger accent piece at each corner of the layout.

Then, apply a bead of adhesive along the cut edge of each end of molding, as well as on all surfaces that will contact the wall and ceiling. Position the first end against the corner block and fasten in place, moving from one end toward the center. The extra length you allowed will slightly bow the molding, but this will flatten out by pushing the molding againt the wall as you progress down its length, nailing it into the wall studs every 16 inches. Once you reach the center, start at the other corner and work in the opposite direction toward the middle of the molding until it is completely secured.

Crown molding is a fun and rewarding, if challenging, home project. I’ve completed enough trim-outs to know that I like the end results better than the installation process, so getting the job done faster and easier is the right way to go. These tools and materials are some of the handiest I’ve found for accomplishing exactly that. I hope you find them useful too.