If you’ve ever seen a saloon gunfight in an old western movie, it more than likely involved a couple of cowboys falling through a handrail. In their search for revenge, the next of kin should begin with the carpenter whose guardrail couldn’t withstand some rousing piano music let alone the lean of a wounded cowboy. We must build better open rail systems if we are going to keep cowboys and our own family safe.

Open rail balustrades often occupy prominent positions front and center where guests are greeted, which is why the intricate woodwork they require are well worth the time and expense. They also perform very important safety functions.

The project shown in this article is a simple handrail system that makes a great primer on open rails. The knee wall requires that all of the balusters are the same length. The one newel post has a good location to be strongly anchored into the face of the knee wall and into the riser of the landing.

Open rail systems come in lots of styles and sizes. In broad terms, the systems are either open tread (where balusters sit directly on the tread) or knee wall (where balusters sit on a little curb wall that covers the ends of the treads). Both of these styles can be over-the-post systems, which provide an unbroken handgrip throughout all of the landings and turns of the staircase. Or they can be post-to-post systems, which end each rail section at a newel post and resume on another side of the post.

We had to remove drywall and corner bead from the end of the knee wall. Drywall can break down over time and get too squishy for anchoring a newel post in this location.

Regardless of the style, there are important safety standards that open rail balustrades must meet. These have to do with strength to prevent failure, rail-size guidelines to provide usable grip, opening sizes to stop little heads and torsos from passing through, and proper elevations that prevent bodies from falling over the top. 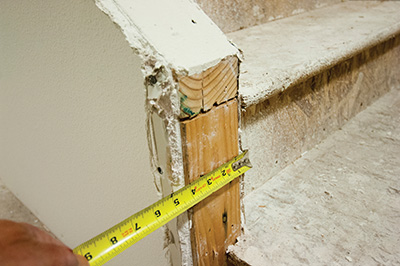 With these major considerations addressed, there are plenty of stylistic options to consider in newel post designs, rail shapes and baluster types. Rails can terminate into a wall, into a rosette or into a half-newel fastened to the wall. Balusters can be dowelled at the base on a flat wall cap or sit in a plowed shoe rail, which itself can sit on the wall cap or be suspended parallel with the handrail. Baluster tops can be in a plow on the underside of the rail or they can act as dowels that penetrate the drilled bottom of a rail.

After taking a rough measurement for the length of the knee wall and the knee wall face, we ripped the wall cap material to width on the table saw and cleaned it up with a planer, sander and router.

In many ways, our featured project is about as simple as an open rail balustrade can get. This post-to-post balustrade (with only one post) has square balusters, a plowed handrail and a shoe rail built on a knee wall.

A jigsaw was used to cut the bevel at the top end of the wall because it had to match the drywall corner bead on each side. For most of our staircases this angle is about 37 degrees.

When it comes to baluster spacing, be sure to make it according to code. This generally requires spacing tight enough that a 4-in. ball must not be able to pass through at any point.

After fitting the wall cap to the vertical wall at the top end of the knee wall, we tacked it into place and used a level to mark where the bottom edge of the wall was plumb with the front face of the knee-wall framing.

We cut the end of the wall to bisect the angle where the knee-wall face meets the wall cap. The cut is usually about 27 degrees. You can cut some scrap material to test the angles ahead of time.

Cutting a notch in the nose of the landing made room for the vertical wall piece.

In Method Two, I estimate baluster spacing, try it with some scraps to see if the spacing measured on the run (level) is close to the maximum allowed by code. I make adjustments, mark the top edge of each baluster location at even increments, set the balusters and manually adjust each fillet to fit. If you cut them a little oversize, you can hold each fillet alongside where it lives, mark it and cut it to fit. This actually goes pretty quickly and there are no surprises when you get to the end of a run with too big or too small a space at the newel or the wall.

We started the handrail layout by finding plumb from the edge of a stair nose and marking the wall (and the level) where the top of the handrail will be—usually about 37 inches (Check your code requirements).

Here is an overview to complete this project:

One trick is to put a nail in the wall at the top-of-the-handrail mark and pull a string to the mark on the level as it is held plumb on the stair nosing at the bottom of the open rail run.

While one person holds the level plumb at the edge of the stair nose, a second person moves the string up-and-down until it intersects the mark on the level. Once at the appropriate elevation, fasten the end of the string to a nail at the floor or wall.

We used a torpedo level to transfer the handrail layout from the string to the center of the wall where the top of the handrail would terminate.

We stood the newel post in place at the end of the knee wall and used a torpedo level to mark where the handrail would intersect the newel post.

We measured from the mark on the newel post up to the desired intersection point (where we wanted the handrail to terminate), which indicated how much to cut off the base of the newel post.

After cutting the newel post to the proper height, we marked where the top of the landing intersected the post and then how much needed to be cut off so the post could slide over to the center of the knee-wall face. We cut the extra wood out of the newel post with a combination of miter saw, table saw and chisel.

After fitting the handrail, we tacked it into the newel post at the bottom and counter-bored for a long screw where the rail meets the wall. Driving a long screw through the rail and into the framing is an important detail to make a strong connection.

The shoe rail was nailed with 2-1/2” finish nails in the center of the knee wall. We often use a piece of scrap material as a pattern to test the angles and the lengths of the rails before cutting the rails. Unlike a lot of other material on the job, you usually don’t have additional rail on the jobsite to cover for a bad cut.

A scrap of material was used to test-fit a baluster, which allowed us to get the correct angle and lengths. Be sure to test the baluster pattern at both ends of the balustrade. A minor difference in knee-wall or rail-rake angle can affect the baluster length from one end to the other.

We used the end cuts from a new balusters to test the baluster layout by standing them in the shoe rail.

We used a 2’ level to test each baluster at its location before gluing and nailing them into place.

After bluing the top and bottom of the baluster and fitting them into the rails at the layout marks, we used 1-1/4” finish nails to toenail the balusters from the obtuse side.

We measured the fillet lengths to get an estimate of how long to cut the fillets and then cut them about 1/8” longer than needed.

We held the fillets up flush with the bottom of the rail and marked where the overlapped the next baluster, then trimmed them to length. It’s a good idea to number the backside of each fillet and put a matching number inside the plow where the fillet belongs on the rail.

When a fillet fits perfectly, we glue the backside, put it in position and nail it at the obtuse angle end.

Notice that the stair skirt covers the drywall at the inside of the staircase and is fit to a ¼” reveal on the knee wall cap.

Dating back to 1874, W.M. Coffman’s Premium Stair Parts Collection contains iron and wood components recognized nationwide for their quality, style and breadth of design options. The company’s Hardwood Collections offer the style, scale and look that’s right for any room or foyer. Each collection and profile can also be combined with W.M. Coffman’s Iron Collection and Box Newel Collection to create a truly unique look. And, with the ability to give your staircase a personal touch with the wood species of your choice, the design possibilities become almost endless. Learn more at www.wm-coffman.com.

We used this plug cutter to cut plugs for the newel post with matching material.

It’s a bit tricky to learn to use this type of plug cutter without a drill press, but it can be done freehand.

After cutting the plugs, we used a small screwdriver to snap them off as deeply inside the hole as possible.

After the glue in the plugs dried, we sanded them flush with the face of the newel post.

We made this jig of 1×4 by ripping the vertical piece so it matches the top of the knee wall framing plus the thickness of the wall cap.

We used a small scrap of wall cap material to test the knee wall in relation to the jig to see if it ran parallel to the stair nosings.

On all of our jobs you will find a supply of these flat shims that are 1.25″ x 3.5″ of varying thickness.

We used the jig and a scrap of wall cap material to determine which flat shims to use.

We used 1/4″ crown staples to fasten the flat shims to the knee wall framing.

We then used a straight edge to bridge between the flat shims at both ends of the knee wall. The gaps between the wall framing and straight edge were filled at 16-in. increments. The result is framing that is flat and parallel with the stair nosing.

We also used the jig to mark the top edge of the stair skirt, which will serve as the trim board along the inside of the knee wall.

The Oak 70.XTRA is an adjustable premier series spiral staircase that features solid Oak wooden stair treads and landing to complement and add style to any interior living space. The horizontal balusters and railing design, surrounding the full length of the staircase, is visually unique when compared to the traditional vertical baluster design of most stairs. The staircase can be […]

Introducing the Ryobi™ 18V ONE+™ Hybrid LED Flood Light. With 1800 lumens, this flood light is bright enough to illuminate a variety of indoor and outdoor projects. Three light settings allow users to customize the amount of light needed to the task at hand, and direct light where needed with its 360° rotating head. The base of this light can be easily […]