Build Your Own Bridge 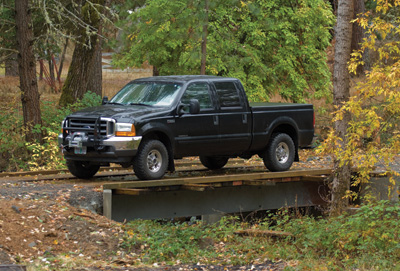 A bridge is one of those things that are often taken for granted until you don’t have one, especially if you live on a rural property and there’s a creek between your house and the county road. Jon Ford had plans to build a new bridge along with building a new house on his property, but plans for the bridge were made top priority when a wayward truck carried too much weight over the old bridge and it collapsed.

Most bridge builds require considerable planning, especially when it is located over a waterway that is under the jurisdiction of several different government agencies. It doesn’t have to be a significant river for several governing bodies to claim control over the rights to build any kind of structure near the waterway. There are agencies that regulate flood control, water quality, fish habitat, etc., and each one of these agency’s regulations must be satisfied before the project can proceed.

Jon had to file a riparian landscape plan, file an application with the Oregon Department of Fish and Wildlife, deal with an agency called the National Marine Fisheries Service, submit a fish passage plan, get the approval of the Department of Forestry, and deal with the County Planning and Development Department. He had to certify a base flood elevation and hire an engineer to draw up the bridge plans as required by the County.

The local Fire District also got involved by requiring that the bridge hold a loaded fire truck (weighing 50,000 lbs.), that the approach angles to the bridge be within specifications, and that a turnaround was provided on the other side of the bridge. Ford already had plans to engineer the bridge to handle a 75,000-lb. loaded concrete truck for the construction of the house, so he made sure the other fire-related requirements were factored into the driveway plans as well.

Also added to the government agencies was FEMA, which presented an inaccurate map showing that the entire property was in the flood plain. Part of Ford’s permitting process was getting the map amended to reflect that his property was indeed not under water.

A variety of agencies meant a variety of concerns ranging from impact on water quality, on fish migration, on flood mitigation and on vegetation frustration. Just when Ford thought all the bases were covered, one of the agents decided that they would need a 20-foot bridge, which was a big change to what everyone had said all along would be a 15-foot bridge. That additional length of the bridge had potential to add thousands to the cost of the bridge in engineering costs, added materials and stronger beams. 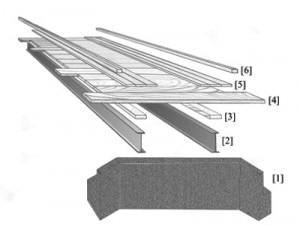 Admittedly, there are good reasons for many of these regulations. In fact, I live downstream from the property, so my interest in protecting our stream was more than just a passing curiosity. I wouldn’t want it dammed up or contaminated and I certainly wouldn’t want to see his new bridge coming my way in the event of a record-breaking flood.

In the unlikely event that a government agency is not giving you specifications for elevation and span on your bridge project, make sure you are above the 100-year high water mark. A bridge that is built too low, or with a span too narrow, can cause a significant choke point during those winter storms or spring thaws that bring streams out of their banks. Debris can hang-up on a bridge, which can catch more debris and eventually dam up the stream, causing a great deal more damage than many people can imagine.

Eventually you’ll even need to address the logistics involved with making something so large that it is structurally designed to handle the stresses of vehicle traffic year after year. All of these considerations must be satisfied before the first shovel can touch the banks of the stream. 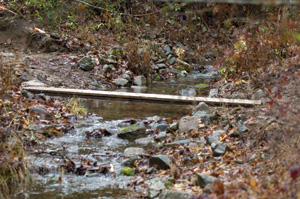 A small stream such as this one may not seem like much of an obstacle to the casual observer, but a little local history can tell you that most streams can get very big when the weather gets really nasty.

Once all the concerned government agencies, community input, surveying and engineering aspects are completed, the actual construction of the bridge can begin. Just like with house construction, the sub-base for the foundation must be shaped and compacted first. For this bridge, which was designed with I-beams, the two foundation pieces that support the ends of the beams are called abutments.

The father and son team of Mike and Jon Ford poured each of the abutments in two parts on top of thoroughly compacted sub-bases topped with3/4 minus crushed rock. Using the surveyor’s base flood-elevation mark to set the top of the footing portion of the abutment, Mike and Jon built their forms to make the footing 3 feet thick and 2 feet high, which made it top out at 1 foot above the base flood elevation. They also formed 2-foot wing walls at 45degrees on each end of the abutment. 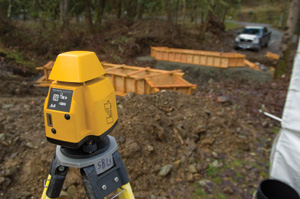 A laser level is the primary tool to transfer the elevations determined by the surveyor to the actual form elevations on the bridge site. 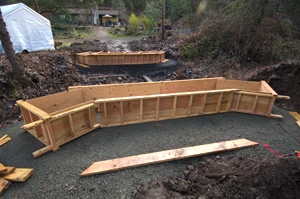 They constructed the forms of 2x4s with 3/4-inch CDX plywood skins on the insides. Mike’s form design included a 2×8 base, which allowed for fine-tuning the locations and for staking the forms into the sub-base to keep them in position. Splices and joints in the base plates were offset from connections in the panels, which made the entire assembly stronger. 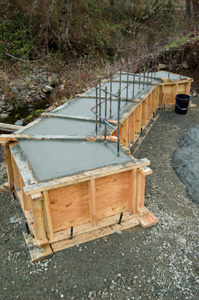 Before pouring concrete into the bridge footings, the Ford crew installed a grid of rebar that would tie the bridge footings together with the main beam supports. After the footings for the abutments were poured, they stripped the forms and enlisted the help of an excavator equipped with a backhoe to maneuver the bridge’s steel I-beams into position. 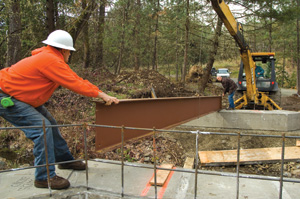 Ford enlisted the help of an excavator equipped with a backhoe to maneuver the I-beams into position. 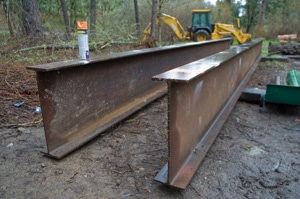 Jon Ford purchased a pair of steel I-beams rated to carry the load of the bridge from a local steel company. 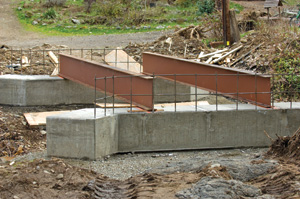 With the bridge footings completed and the I-beams in position, the bridge was ready to have the header forms built around the ends of the I-beams.

Next, they built the header forms around the ends of the I-beams. They were able to use the same form panels for this knee-wall portion of the abutment by positioning the panels at the desired elevation, which was flush with what would be the surface of the bridge deck.

After considering several options for tying the two I-beams together, Ford settled on several thick steel plates positioned perpendicular to the I-beams and fastened to the I-beams’ webs with angle-iron pieces bolted to both the webs and the cross-plates. He also added some diagonal bracing as specified by the engineer’s plans. 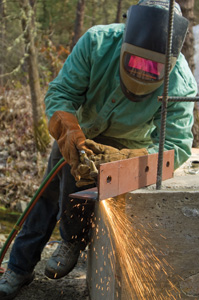 Although Mike owns a plasma cutter, he chose to use a cutting torch for most of the cuts on this project. What the cutting torch lacks in precision, it makes up in speed and mobility. Since it needs only the tanks to operate, Mike had freedom to move around on the job site and cut the steel components in all types of weather. 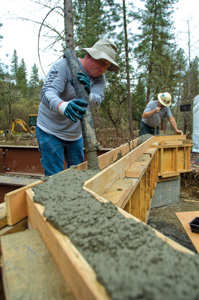 Mike and Jon predrilled the I-beam flanges for the bolts that would fasten the wood stringers to the steel beams. To mark the hole locations on the stringers, Mike installed the bolts upside down in the flanges, positioned the stringer beams and then gave them a good hit or two with a sledge hammer which caused the bolt to leave an indentation where he then drilled the bolt holes. 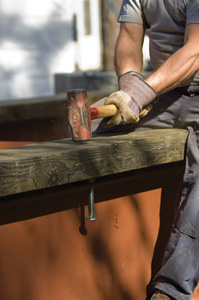 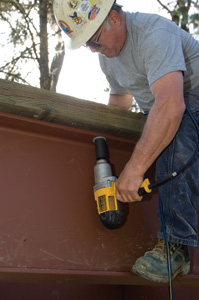 While torquing down the nuts, Mike used his Speed Square as a straight edge to make sure the bolt heads were flush with the top of the stringers. The stringers functioned as the transition between the steel support beams and the wood bridge deck. The subsequent components were attached using wood-to-wood fasteners, including lag bolts and deck screws. 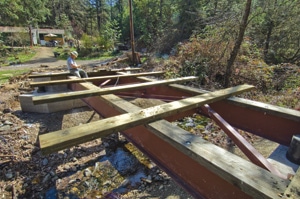 Mike positioned the first five deck boards, which were the longer ones, and attached them to the beam stringers.

Five of the deck boards were 4 feet longer than the other twenty deck boards. The longer deck boards were designed to cantilever beyond the primary deck and serve as support for a planned railing system along the bridge. Mike positioned these deck boards first and spaced them evenly before attaching them to the stringers with lag bolts. 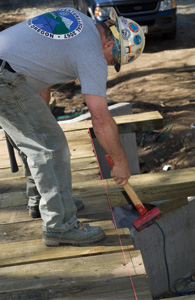 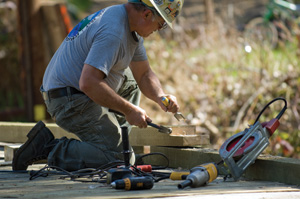 The curbs along each side of the bridge required a splice that Mike cut using a circular saw and a chisel. 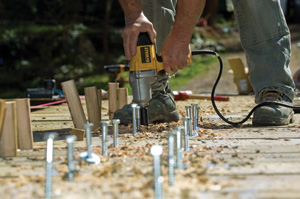 After completing the main deck of the bridge, Mike added a series of three 2×12 runners as added strength for the area where the rubber meets the bridge. He also added 4×6 curbs along the outside edges of the bridge decking. 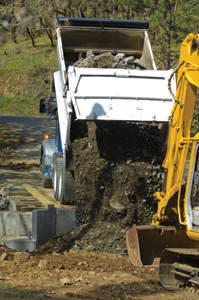 The first vehicle on the bridge was a fully-loaded dump truck. Truck driver Jeremy Williams didn’t look a bit concerned as he backed a load of riprap over the bridge to back-fill the cross-stream abutment. 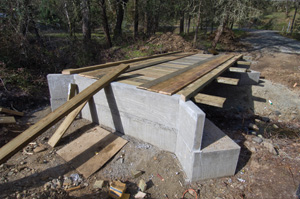 The nearly-completed bridge is almost ready for backfill. 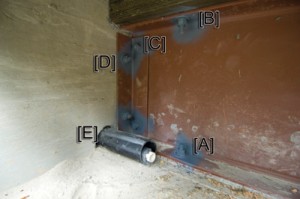 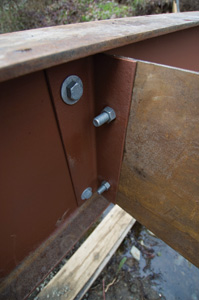 Several steel plates connect the two I-beams to each other via angle iron. The plates prevent the I-beams from twisting. 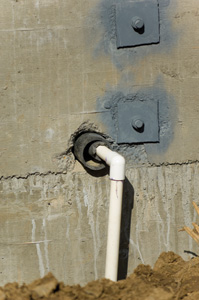 Bolts that go through the knee-wall are attached to the web of the I-beam with a piece of angle iron. Notice that the washers are square scraps of steel with a hole drilled in the middle.

Soon after completing the bridge, Jon Ford started a house construction project so construction traffic like this power company truck put the new bridge to good use. 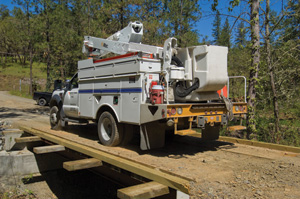 EHT reader Michael Kober, P.E., came across this article and suggested that more emphasis should be placed on the importance of having adequate foundation members for optimum long-term performance, particularly resistance to flooding and scour conditions. “The abutments as built will be susceptible to overturning under severe flooding and scour conditions, lacking either deep piling or adequate spread footings to properly support them.” Kober suggests the story should “discuss the need for longitudinal reinforcing steel in the abutment body, the grade of beam and fastener (bolt) steel, the importance of proper wood preservative treatment of the timber deck, the strength of concrete to be used.”

1.   “Angle Iron”  True iron angle has not been rolled (produced) in this country for more than 80 years, having been largely replaced with structural steel angle.  In general, iron is not used as a construction material because it is too soft, and lacks the tensile strength and durability of even the lowest grades of structural steel.

2.  “I-Beams”  The two main (steel) load-carrying members in the article are not I-Beams, but rather they are Wide-Flange or more recently called W Beams or W Shapes.  True I-Beams (originally known as American Standard Beams) and more recently, S Shapes, were popular in the early 1900s for all types of steel construction, but have largely been replaced by W Shapes.  As demand for them has diminished, S Shapes are very limited in availability, especially in deeper sections.  The visible difference between S Shapes and W Shapes is the fact that the former have tapered-faced (not parallel) flanges, while the latter have parallel-faced flanges.
— Michael Kober, P.E.