Home » Newest Articles » How To Build A Wood-Paneled Shower

How To Build A Wood-Paneled Shower 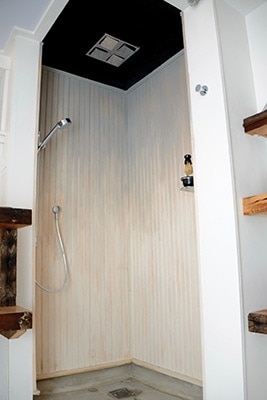 Wood in the Shower instead of tile. We show you how.

I’m not sure where I got the idea, but a wood-paneled shower has been on my man cave to-do list for some time. I mean, why not, right? Every other photo in my Facebook feed seems to be of some timber-rustic-throwback-pallet-inspired this or that. The problem is that we only love the pictures and then we go to the knockdown furniture store and buy whatever we can easily slap together. Not this time; once I got inspired, there was no turning back.

This basement shower started with the concrete curb I poured myself, integrating it with the existing floor slab. You can buy a shower pan, but the essential nature of this shower is a zero-clearance, nothing-with-caulk-to-clean man cave integration of awesomeness. Simply the absence of something that needs cleaning gives me the peace and serenity I hear so much about in home-improvement media (mostly what I call “ohmygod” makeover shows targeted primarily to women). I think that’s an element we overlook in designing for men. It’s not about another bauble or element or color, or even shelf for memorabilia or bigger TV. It’s about the absence of crap; about the individual elements being so well built and proportioned—and useful—they don’t need makeup.

Anyway, back to the curb. How you do it varies by project because the concrete and shower base is determined by your plumbing. If you’re not breaking the slab like I had to do, you may need to create a step into the shower so you can pitch the floor toward the drain. You may also be able to grind the floor, exposing the aggregate (also creating a metric ton of dust). No matter which way you slice it, the water needs to go somewhere. Drains are preferable.

I formed the shower curb with a slight pitch, so the top of it was tucked under the wall cladding but the bottom is flush with the bottom of the cladding. Functional? Sure. Proportionate: Yup. I gave the concrete a few days to set up before I touched it again.

Framing is pretty typical. I placed studs in the corners and evenly spaced between the corners (16 in. on-center doesn’t apply here). Since the main showerhead is Kohler’s 12×12, ceiling-mounted ShowerTile, I left room for the plumbing to get up the wall and into the ceiling. For the wall-mounted Kohler hand-shower, there was no need for the blocking typically required for drywall or cement board showers because I could screw right to the wall.

I did have to work around venting from a nearby effluent pump and the electronic control for the showerheads. (Note: Electronic controls offer another slice of heaven, by the way. No waiting for water to heat up and it’s digital; 107-degrees is a nice temp for shower power).

I installed horizontal blocking for sufficient nailing of the wood planks. And, I was extra careful to get everything as plumb as possible so all my corners would be nice and straight along the vertical.

I always approach “waterproofing” the same way. Namely, there is really no such thing.

Instead, I make sure water that does eventually get in can then find a way out. And even though it’s dry behind the wall (I left the framing open inside a closet so I could monitor this), there is always some calamity that may ensue, like—and I kid you not—my son figuring out that the faucet can spray really, really far. He thinks this is hilarious.

So the first thing I did was coat the backs of the Yellow Pine 1×4 T&G beaded boards with one coat of Spar urethane. It’s enough to keep the back from holding moisture.

Next, I detailed the corners with roofing membrane. Where water gathers is what I’m most concerned about, so water (in the form of liquid or vapor that condenses and becomes liquid) has an exit. I also wrapped the bottom plate to shed descending and ascending water (yes, it can flow uphill).

I then created a “drainage plane”—an air gap behind the wall cladding through which water can travel and escape. I’d love to say I’m a genius for using the dimpled material that created this gap (dam proofing membrane, DPM), but the truth is I stumbled upon it. I had a roll left from installing my basement’s perimeter drain. It’s inexpensive and easy to apply. I held it in place with washer-head Spax screws. Once in, I marked the horizontal blocking with a Sharpie so I could locate it for nailing.

For the shower surround, I used clear 1×4 tongue-and-groove clear Southern Yellow Pine. On one side, it’s beaded and V-jointed for use as paneling, and the other is square for use as flooring. I love this stuff. The bead and the V-joint combine to make vertical lines and texture that make the shower space feel taller, and they also team up to channel water down and away from the wall. The tongue-and-groove joints lock it all together so water of any real consequence can’t get through.

Most of my anxiety attacks were about the end grain. That’s where wood is most absorbent. To keep water away from it I used a weatherboard at the bottom. A weatherboard is a horizontal piece, installed at an angle (like a window sill or drip cap). Underneath it I cut a 1/4-in. deep kerf parallel to the front edge. This is called a “bond break” that causes sticky water molecules to fall apart and fall to the floor instead up wrapping around the weatherboard and leaching up the wall.

Since the weatherboard is also the starter piece for the vertical slats, I made sure to get it nice and level. I pitched it 8-degrees and shot it right to the bottom wall plate.

To get the wall cladding started, I used 1-in. (aka five-quarter, 5/4) corner blocks. The bottom cut is tricky. It’s a double miter and it took me a few minutes to wrap my head around it. Because you’re putting it in the corner, it has to be triple-mitered to mate up with both angled weatherboards. As I write this, I forget how I did it, but I did. A dab of clear latex caulk (I like DAP Dynaflex 230) where the corner piece hits the weatherboard helps further seal the end grain.

Now the fun stuff: when all the prep becomes pomp and perfection. I rip the groove off the first board on the table saw and install it using both face nails and tongue nails. I cut this to fit tight between floor and ceiling because you can see the edge. Then I follow up with the next piece, cutting the miter on the bottom to cover the weatherboard and cutting the top about 1/4-in. shy of the ceiling.

Then, just like you would with any T&G project, when you come to an obstruction (the corner blocks here), I rip the back half of the groove off, rip the board to width and install with face nails.

And—this is an important detail—start the next column with the tongue-piece you ripped off the board before the corner (unless it’s really small, like under 3/4-in.).

Carefully cut around penetrations. When in doubt (for me, almost always), make a template, test it out, then transfer your layout to a full piece. Sometimes you can clamp two pieces together and just drill a hole in them to let the pipe through.

For our Kohler shower control,

I installed the bracket and added clear latex caulk to the top and sides to shed water.

To cover the top edge of the wood shower, I ripped a thin batten from a piece of Southern Yellow Pine just thick enough (about 3/8-in.) to butt into the corner blocks flush. A few dabs of clear caulk and some brads hold it in place.

The finish is always what you see and feel. I love a natural wood look, but I also love the way wood feels when it is painted. And I doubly love it when it becomes one of my wife Theresa’s rippin’ artworks.

She did an ombre effect on this shower, which lets the natural feel of the wood ripple through the color while adding a distinctly masculine, sophisticated look that goes hand-in-(work)-glove with the entire space.

Get creative to put a personal stamp on your project.

I made a steel shower caddy and a countertop made of reclaimed lumber to maintain a rugged look throughout the man-cave bathroom.

Editor’s Note: Mark Clement is a carpenter and co-host of the MyFixitUpLife show.