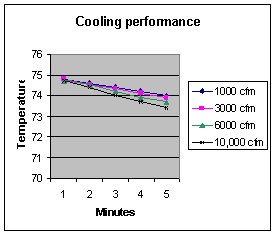 How much air do you need to move through a house to cool it with a fan? The traditional rule of thumb is 3 to 4 times the floor area (by this a 2000 square foot house will require from 6,000 to 8,000 cfm). We don’t agree. We think it can be done with a whole lot less.

First, cooling a house and cooling people in the house are two different things. People cool quickly with increased air flow. Houses give up their heat slowly. We recommend using a box fan to cool people. It is much more energy efficient than over sizing the whole house fan.

Third, as houses become more energy efficient, their cooling load drops along with their heating load. This can often mean that air flow cooling may be all that is needed. Sizing the fan system based on the area of the floor would be like sizing the heating system without considering insulation.

Fourth, to evaluate performance all the components of energy consumption should be considered including the energy consumption of the fan motor, the heat loss through the fan system itself, heat gain and loss in and from the house, and heat gain and loss in and from the attic area. Whole house cooling fans can consume from 200 to over 500 watts. (The TTi HV1000 uses 76 watts.) Traditional whole house fans are un-insulated. Even the conductive loss through them can ruin a high average R-value attic. (The calculated Reffective of a 1008 sq. ft attic with R 49 insulation and 36 inch fan drops to R 15.4 because of the fan. The same attic with an HV1000 has an Reffective of 48.8.) Not only will a poorly insulated whole house fan lose heat in the winter, it will allow an increased gain of heat in the warm weather. The high level of heat in the attic will be transferred through the fan housing into the house. In calculating the cooling effectiveness of a particular fan one needs to consider the conductive and convective heat loss from the house and the attic. Until the excessive heat is moved from the attic, it will act as a blanket to the rest of the space.

Fifth, a critical factor in considering a whole house fan for cooling is the amount of opening from the attic to the outside. For the fan to be able to move the air from the outside, through the house, and back to the outside, the path has to be complete and of relatively low resistance. HVI (the Home Ventilating Institute) recommends dividing the fan’s cfm by 750 to determine the correct number of square feet of opening from the attic. (For example a 6,000 cfm fan would require 8 square feet of opening. A 1,000 cfm fan would require 1.33 square feet.) At the other end, for the 6,000 cfm fan to work correctly, there would need to be six, thirty inch wide windows opened about 6.5 inches each.

Although the noise levels on these products are not commonly measured, the computer fans in the HV1000 are quiet enough to run all night in a bedroom. It is difficult to talk in the vicinity of a 10,000 cfm fan. So we think our HV1000 is better and our customers seem to agree!

If you would like to review the full length articles on this subject, please let us know and we will be glad to mail or fax them to you.

Tamarack manufactures fans and controls designed to improve the air you live in. We also distribute a wide variety of other products.