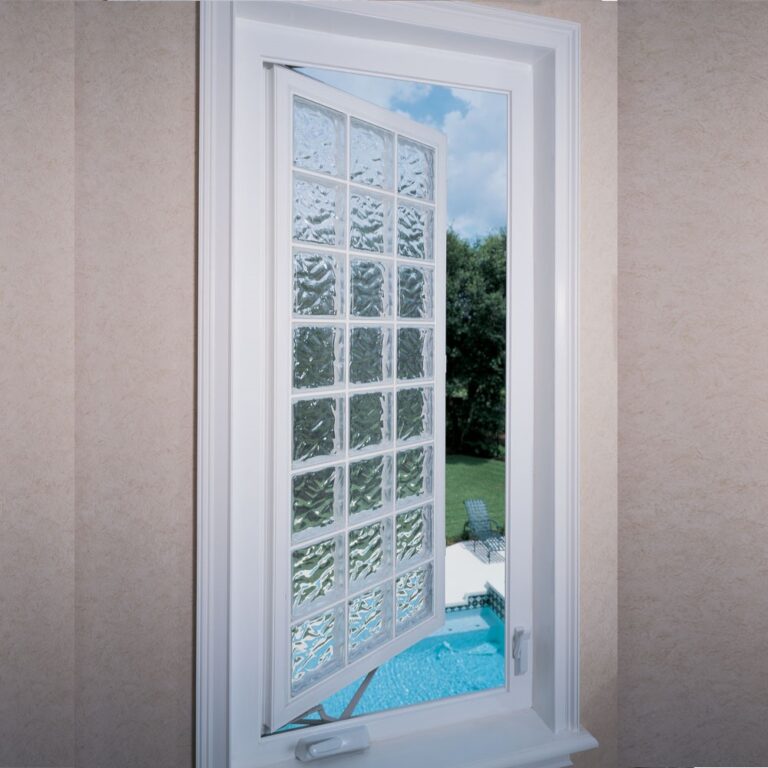 When I was making plans to remove a set of sliding patio doors in our master bedroom and replace them with a single, half-lite door, my wife was concerned that it would be too dark in the room. After she refused to wear the provided headlamp, I had to admit she was right and started making plans for Phase 2 of the project.

Of course I had little idea what Phase 2 might be, but I talked about it with the same air of confidence you hear from guys you see on viral video montages before doing permanent damage to themselves.

I considered various forms of lighting, which were vetoed by my life-long companion as she groped her way through a maze of bedroom furniture. She missed the brilliance of the natural light.

Not wanting to start another major remodel project, I relied on one of my go-to fixes: Glass block. When done right, a pair of glass block windows would lighten the mood in the room while providing minimally invasive access to the abundant natural light on the other side of the wall. 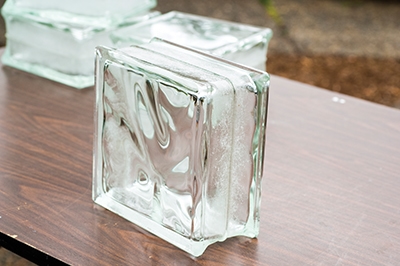 There are some pretty cool advantages to using glass block. First of all, their double-pane construction makes them naturally (see what I did there?) energy efficient and a good sound barrier.

You can put glass blocks together to make a variety of rectangular shapes, which for some projects means you can decide on size as you go. In our case, we wanted to keep the openings between stud bays to avoid the need for headers and concerns about structural support for the second floor above.

The obscure glass also gives you built-in privacy. There’s no need for window coverings, but window coverings can certainly be employed for room darkening or for decorating purposes.

The primary disadvantage to a glass block window is that it can’t be opened unless you order it custom-built from the manufacturer. If you install a fixed window as shown in this article, it won’t provide ventilation or egress in the event of an emergency. You’ll still need a second door or an active window to provide these in a bedroom.

Techniques for installing glass block can vary quite a bit from what we did for this project. You can use mortar to build glass block walls or special spacers to help lock blocks together when the structure involves several rows and columns.

Since we used a single column of blocks for each window, we did not need to be concerned about the horizontal block-to-block connections. Each block would be thoroughly held in place with the vertical window stops. Weather-tight seals were the only concern at the joints. These we sealed with clear silicone caulk.

On this project, the installation process was pretty straightforward. We planned to make the window surround/frames with boards that were about one inch wider than the thickness of the wall. The idea was to be precise enough in cutting the openings to eliminate the need for casing. The extra 1/2 inch protruding through the wall provided a shoulder so the surrounds could be sealed to the wall surfaces with caulk.

One of the things that made this job quicker was the pre-primed pine boards we found for the window frames. These were primed on both sides with white primer, which helped provide added reflective characteristics to the inside of the window opening and ensured minimal moisture penetration to guard against warping.

The plan was to build boxes to house the glass blocks, use the boxes to mark the openings, cut through the wall, nail in the boxes, stop in the blocks, seal with caulk and paint.

The project went well, the room is brighter and in the end I was right. Remember, when a project leaves you in the dark, tell your people, “That will be handled in Phase 2.”

Here’s how we got it done:

The most common glass blocks are square with obscure glass and generous pockets of sound- and temperature-insulating air between the walls. 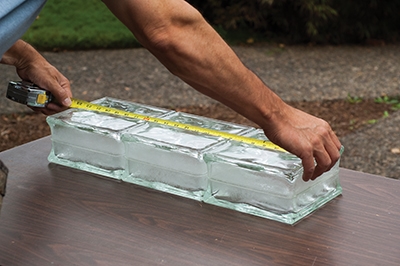 I started the installation with plans to build the surround boxes and use them as templates to lay out the openings in the wall. First step is to measure the set of blocks laid end to end. I chose to use three blocks per window on this project. 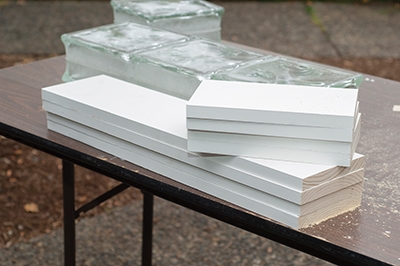 Next, cut four pieces of primed pine about 1/8 in. longer than the set of blocks to allow wiggle room to fit the blocks in the box. 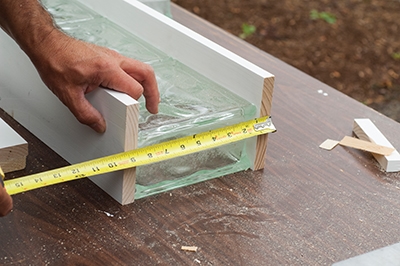 Put the blocks between the vertical boards and measure to get the length for the horizontal boards, which overlap the thickness of the verticals.

Cut all of the horizontal and vertical surround boards before assembly. 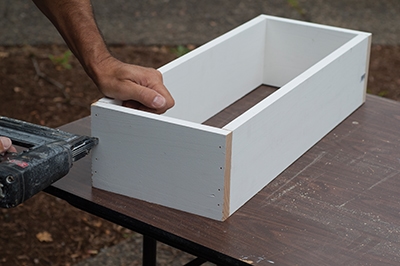 Nail the surround boards for each window together to form a box. 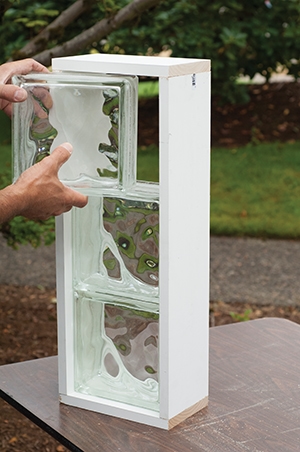 Test the set of three blocks in the surround to check the fit. 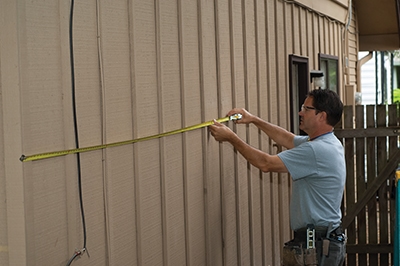 Take measurements both inside and outside the house to find the right location for the windows. 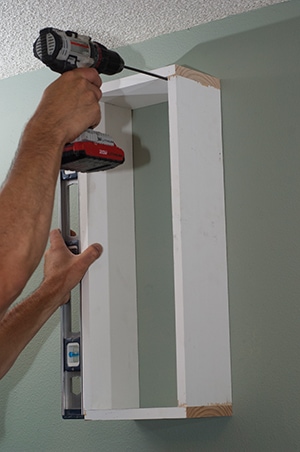 Use one of the boxes to lay out the location of the first window.

Drill a hole with a long bit all the way through the wall to indicate the elevation of the top surround board. 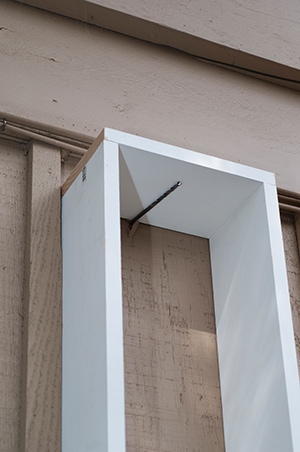 I used the drill bit to determine elevation and one of the batting boards as a stud location to get the location of the first window. 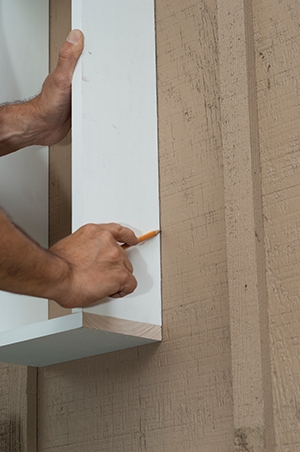 The surround box serves as a template to mark the exterior opening for the window. 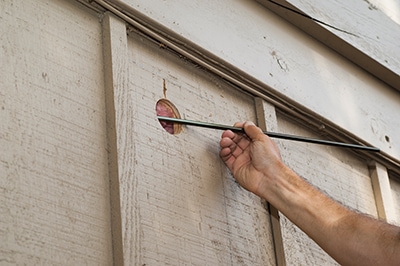 Before cutting the exterior siding, I made a large hole in the planned opening and used an arrow shaft to probe the interior of the wall. I wanted to make sure of the exact stud location and double-check for wires and pipes before proceeding. 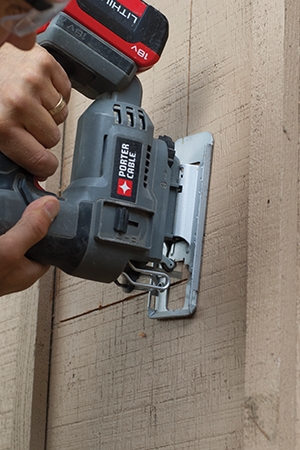 I made some of the siding cuts with a circular saw and finished the cuts in the corners with a Porter Cable cordless jigsaw. 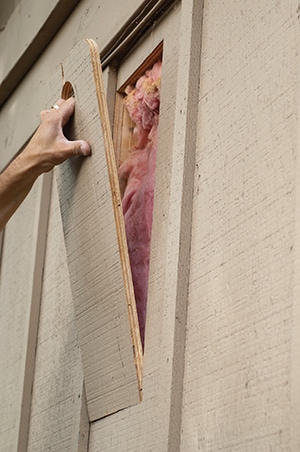 Cutting out the siding revealed the wall insulation, which needed to be cut and removed. 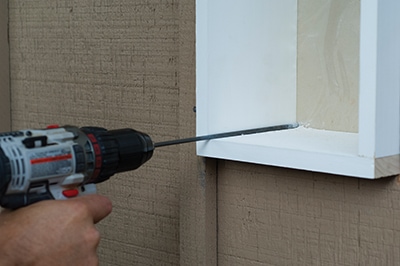 With the surround box partially in place on the exterior, mark the exact location of each inside corner through the drywall with a long drill bit. 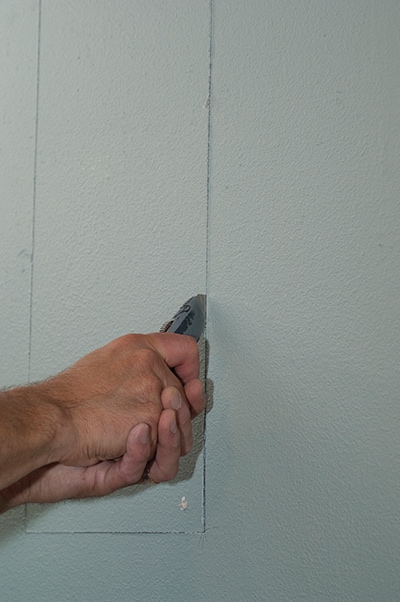 With the corners determined, again use the box as a template and mark the outside of the box on the interior wall. Be precise to eliminate the need for trim boards. Use a utility knife to score the drywall face at the layout line. 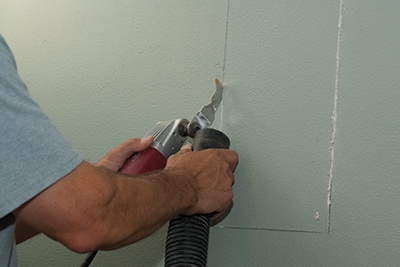 I used a multi-tool with a saw blade to cut the drywall, and used a shop vac to catch most of the dust during the cutting process. 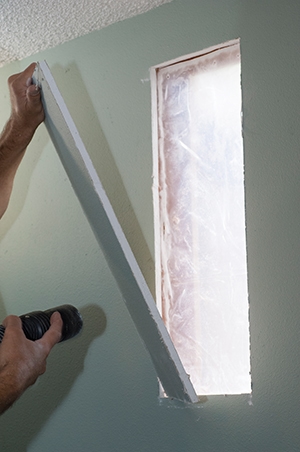 And there was light. All that remained was to cut out a layer of vapor barrier to complete the opening for the surround box. 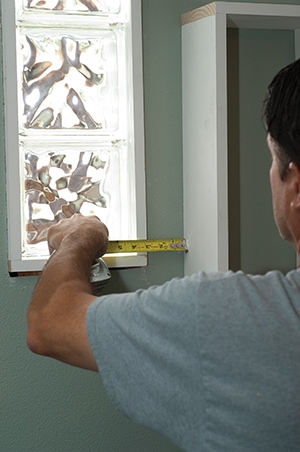 I put the first surround in place and set the blocks in it for reference because I wanted the offset to be about 1/3 of the window height. This would put the top of the lower window at the joint between the top two blocks of the higher window. I then measured from the first window to the surround of the second to position it for marking the opening. 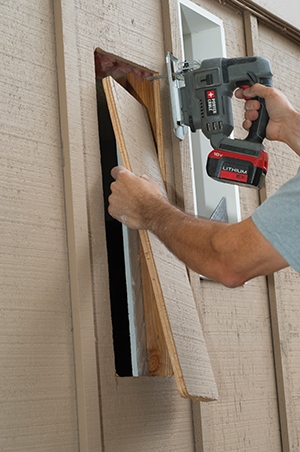 After cutting out the interior opening for the second window, I marked the corner locations by drilling from the inside and then using the surround to mark the siding for the cut-out. 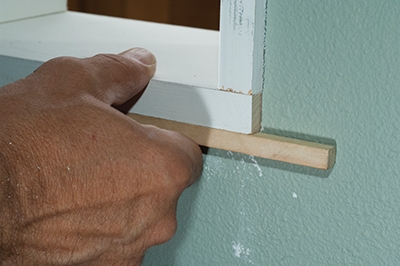 I used a 3/8-by-3/8-in. wood gauge block to set the amount of surround extending beyond the interior wall. 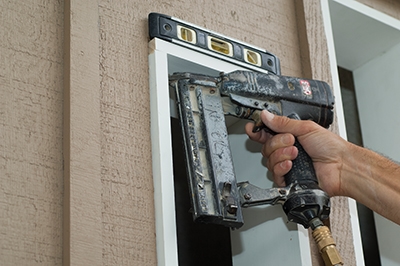 With the surrounds gauged for an even reveal, and after double-checking for level, I nailed the surrounds into the siding with 2-in. 18-gauge finish brads. 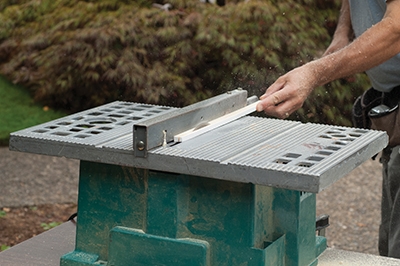 I cut 7/16-by-7/16-in. wood strips as window stops from the same primed pine material I used for the surrounds. 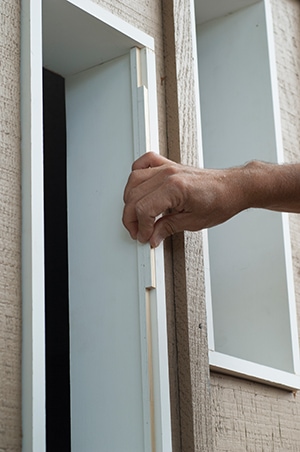 The gauge block helps to position the exterior stops inside the surrounds. I nailed them into place with a micro-pinner. 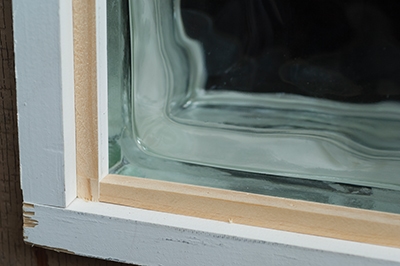 I installed the stops with the primed side to the glass block side because the reachable parts could be painted later. 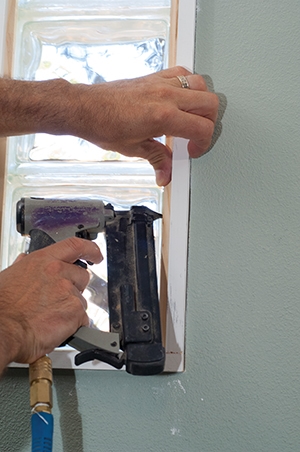 I pinned a second set of window stops against the glass blocks on the interior side of each window. 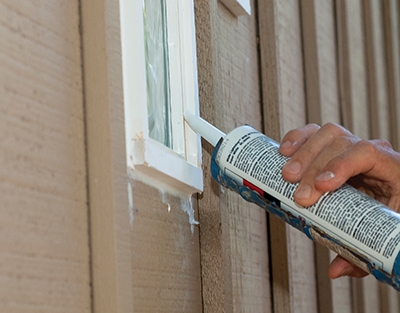 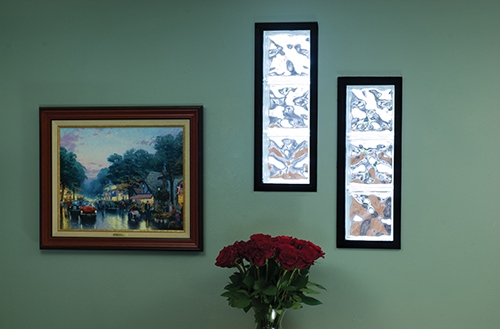 If you don’t want to assemble the windows block by block, you can order custom-built windows shipped directly to your home.

A few years ago the EHT staff installed a block window in the 32-in. wooden interior door of a bathroom. The acrylic block insert was manufactured to our custom specifications by Hy-Lite, a U.S. Block Windows Company. A door insert measuring 2-by-6 feet was recommended. The acrylic blocks provided privacy but also allowed the late afternoon light to filter into the otherwise dark corner where the bath was located. We used a solid-core door with hardware that matched the satin nickel finish on the bathroom fixtures.

To install the insert, we simply created an opening in the door the same size as the insert’s inner frame, placed the door on top of the block insert and reattached the block frame’s removable side with screws, which locked the insert into place. Voila! We now had a unique door for our bath that was not only beautiful but functional as well. 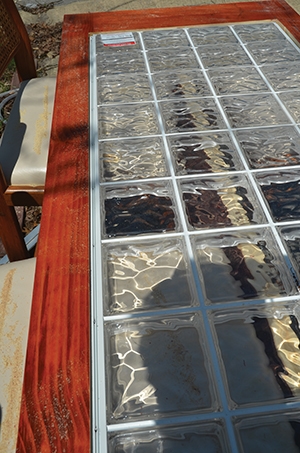