Home » Newest Articles » Adding a Medallion to a Tile Floor

Adding a Medallion to a Tile Floor 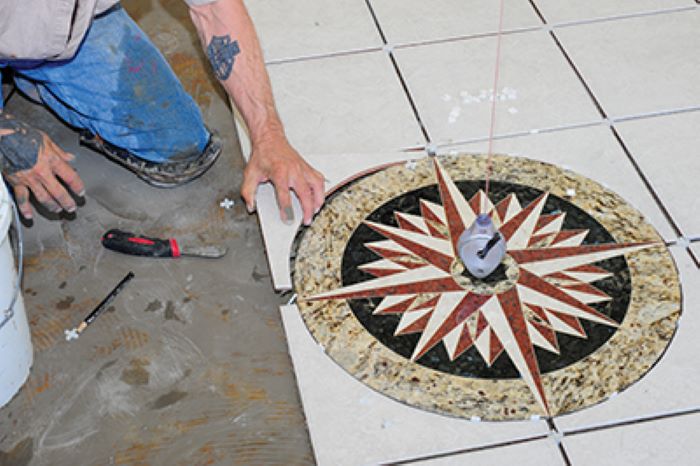 Setting a Medallion in a Tile Floor

Have you ever noticed how a straightforward project seems to attract a spousal unit or some such person who comes out of nowhere to drop a tricky design element right in the middle of things? Such was the case with a recent dining room tile job. Just when it was looking like a simple grid of tile on concrete—Boom! In comes a medallion to throw us a curve.

Of course, it wasn’t just a medallion. It was a disk with a compass rose pattern that needed to be oriented with the North Star. Where did I put my sexton?

This round feature among the square tile, which had to point north, also had to be centered under a chandelier. (Hopefully, the electricians had actually centered the light fixture on the ceiling.)

With one drive-by comment, this medallion had suddenly and without warning become the very center of attention for our otherwise standard tile project.

Even if a spousal unit doesn’t drop a medallion smack-dab in the center of your project, there are plenty of things to learn from this technique that you can use on other jobs. Using a plumb bob, laying out a grid, dry-fitting, marking, cutting curves in tile . . . Heck, this might even inspire you to throw a curve of your own into your next straightforward project. 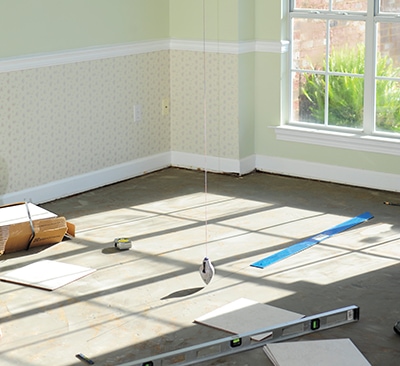 Our tile setters, Richard and Mike Kenney, used a plumb bob to transfer the center of the light fixture to the floor. If you don’t have a classic plumb bob, most chalk lines are designed to double as a plumb bob. 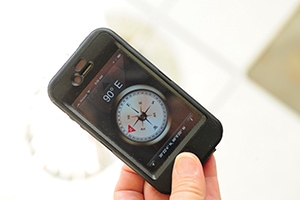 It’s a good thing someone had a compass app on their smartphone. Fortunately, the room was situated on a North-South axis. 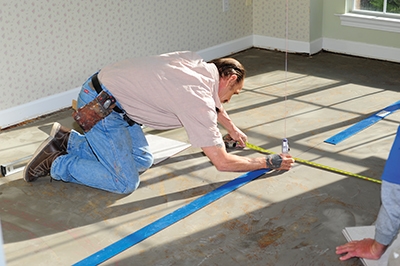 After measuring from the wall to the plumb bob, the Kenney brothers measured from the wall at each end of the room and made a corresponding mark. Between these marks, they snapped a chalk line. They did the same thing perpendicular to the first line and checked the two axes for square. 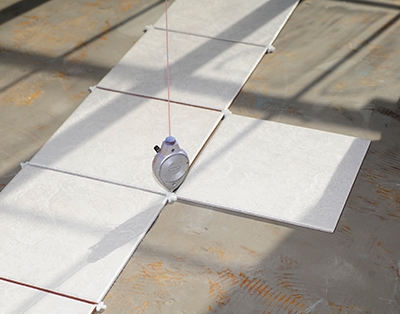 They used the two layout lines to dry-fit some tile and make sure that the center point was still on target. 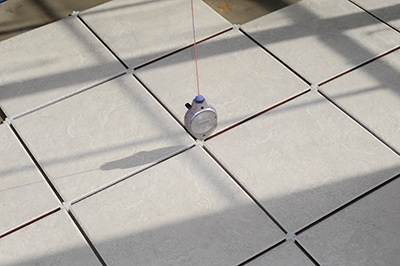 Before positioning the medallion, the brothers added two tiles to the outside of each of the four center tiles, which would be cut to make room for the medallion. This way the four cuts would be sure to nest back into the right position. 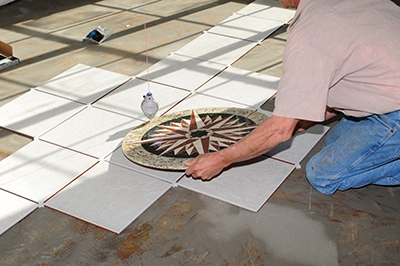 With all of the surrounding tiles dry-fit with grout-line spacers, it was time to slide the medallion into place. 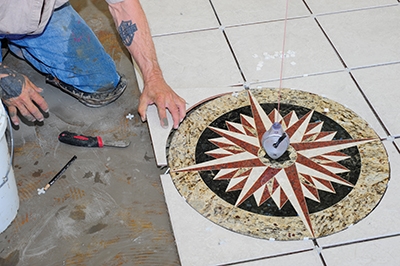 The crew took extra care positioning the medallion in the center of the layout with the compass points lined up on the grout lines. 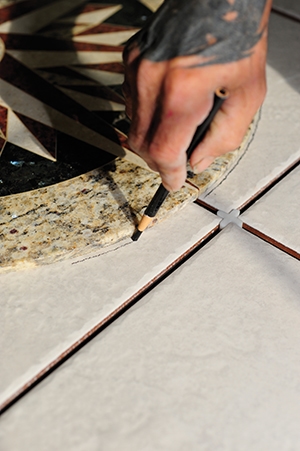 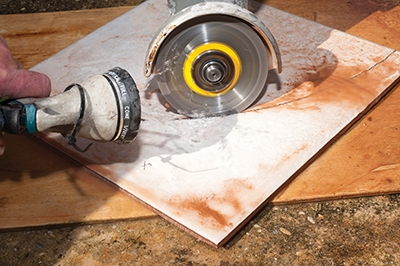 After carefully numbering each of the four center tiles, they took them out and cut them along the pencil lines using an angle grinder with a diamond wheel. Remember to guard against electrical shock if using water around power tools. 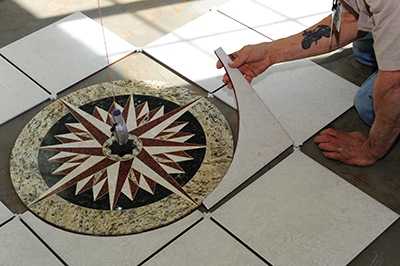 After placing the medallion in the center of the layout, the crew tested each of the cut tile pieces. 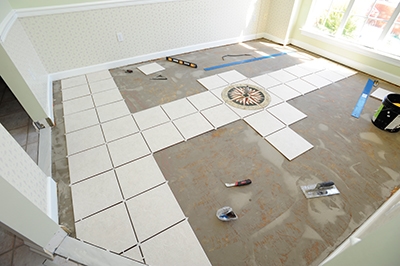 A double row of tiles extending in both directions gave a good indication of how things would line up along the walls. Without the medallion to determine center, we probably would have started with full tiles at the opening to the room. 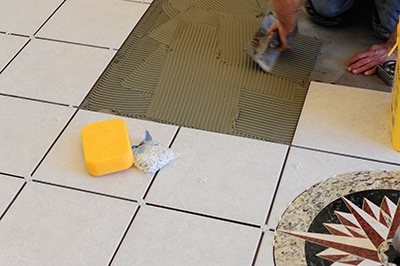 The next step was to spread thin-set mortar with a notched trowel over one section of floor at a time. 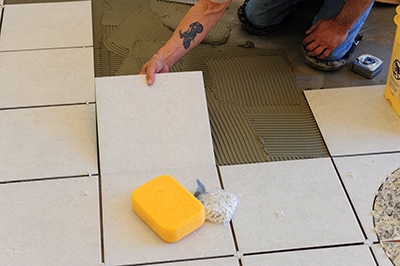 With the thin-set evenly spread over the entire width of a tile, Richard placed the tile and adjusted it to the layout using grout-line spacers.

After setting three of the four cut tiles around the medallion, he spread thin-set for the medallion and carefully positioned it within the circle provided in the layout. 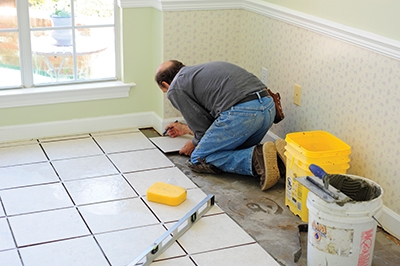 With the final piece of curved tile, Richard finished surrounding the medallion area so the rest of the layout was a simple grid pattern. 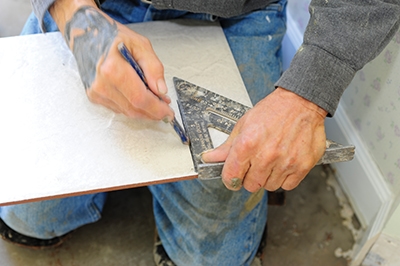 Often the best way to mark a piece for notching is to simply hold it in place with the proper grout spacing and mark where the cut meets the obstacle. As you plan these cuts, allow for any grout or base shoe that you’ll use to finish the perimeter. 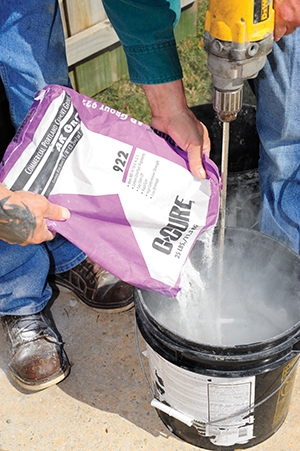 After marking where the cut meets the wall corner, a speed square can be used for marking the cut line. 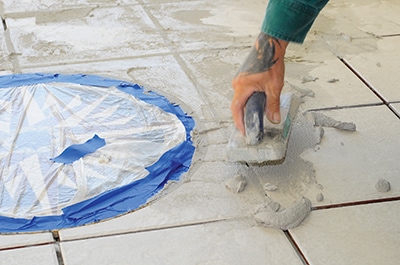 The day after setting the last tiles, the crew mixed the grout with an electric drill and a mortar/grout mixer attachment. 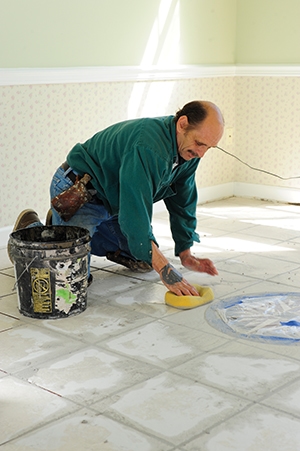 Since they weren’t sure how the medallion would hold up to the abrasive sand in the sanded grout, they masked off the center piece during the grouting process. The key here is to keep the tape slightly back from the edge and make sure none of the tape extends into the grout line area.

Sponging off excess grout and cleaning grout haze from the tiles require lots of rinsing and wringing of the sponge and a light touch to avoid dragging fresh grout out of the joints. 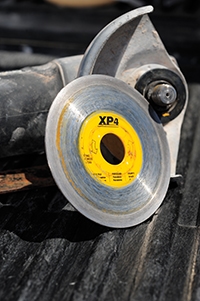 The Kenney brothers used a Dewalt DW4735 4-in. Wet/Dry XP4 Porcelain and Tile Blade to make the curved cuts around the medallion. The small diameter of the blade allows it to be turned when making shallow, successive cuts.