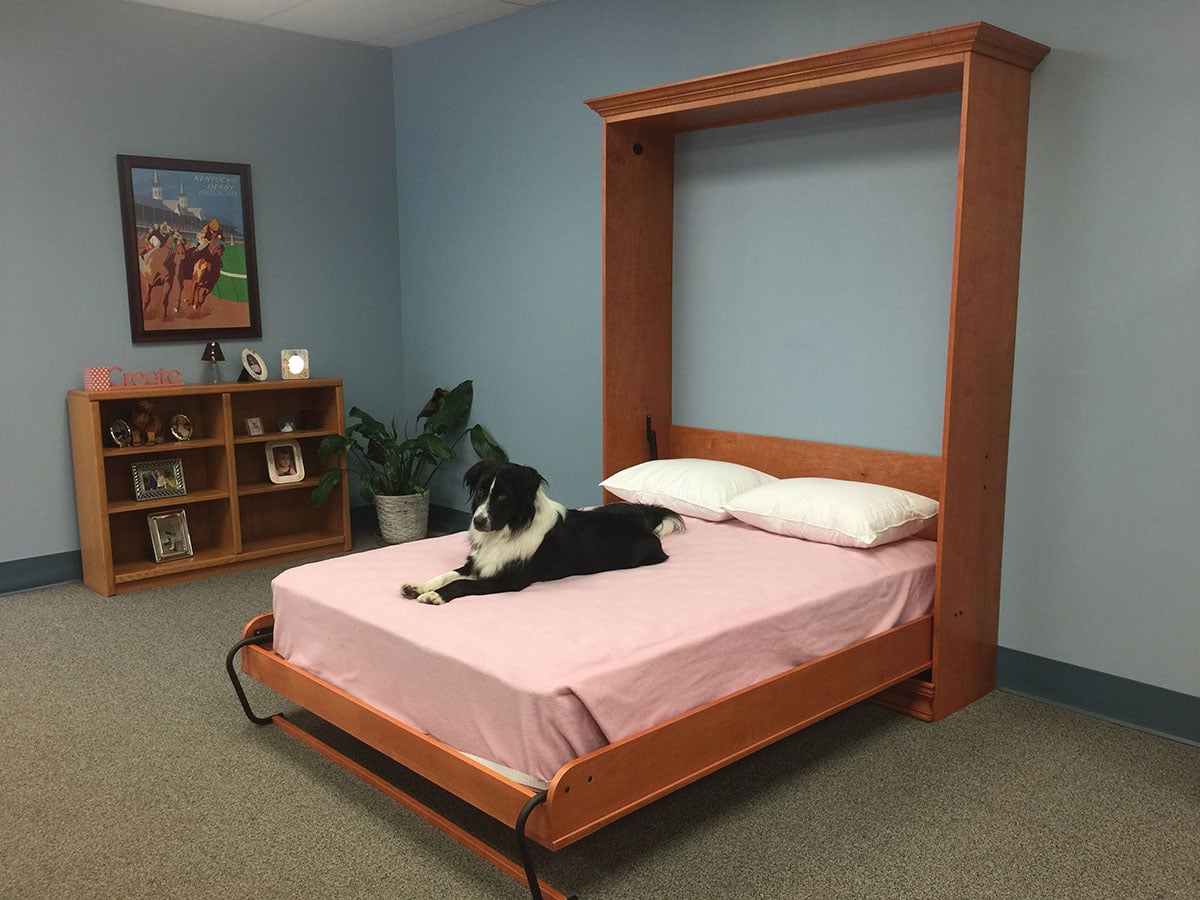 For over 30 years, Create-A-Bed has been making the Hideaway-style Murphy Bed not only safer, but easier to build, use, and adjust for the do-it-yourselfer.

A lot of effort goes into being able to lay down on the job. Take the case of Dale and Brenda Burchett. Their company, C.A.B. Inc., the parent company of Create-A-Bed, is the proverbial overnight success, 30 years after it started.

How It All Started

The roots of the business go back to 1984 when Dale Burchett was approached by a designer who wanted him to build 12 Murphy bed cabinets for a Cincinnati hotel.

Hideaway-style Murphy beds typically are enclosed in a wall or cabinet when not in use. Because living space is becoming smaller and more expensive, while the need for home offices and multi-purpose rooms is increasing, Murphy beds have never been more popular and in demand. They are found in hotels, condos, fire stations, apartments, and houses of all sizes. People love Murphy beds because they provide a comfortable bed anywhere that they need one, then disappear when their guests do, freeing up valuable living space.

Burchett had taught shop at Shawnee High School and had left to launch his own custom wood-working business. He took on the Cincinnati project for a Clarion Hotel, but it turned out to be a larger job than he expected. Burchett had built armoires to contain the beds. However, when he arrived to install the beds, the mechanisms that allow the beds to move up and down were so large that they had to be put on top of the service elevator to get them to the rooms.

“This big, monstrous mechanism came in, and it had big springs, like car springs and cables,” Burchett said of the Murphy bed parts.

Additionally, the bed had to be bolted to the floor to secure it. Each bed installation took a day. After the hotel’s interior designer asked him to do 12 more cabinets, Burchett realized there was a market for the beds. He knew there had to be a better way to install them.

Pulling into The Business

Burchett began working on making Murphy beds easier to install, safer, and easier to maneuver. His first innovation was to replace the springs with a piston on either side of the bed. He developed the piston lift system because it had fewer moving parts. There were no tension springs to snap or pinch the installer, or the operator of the bed.

“The springs just scared the heck out of me,” Burchett said.

Adjusting an old-fashioned spring-lift murphy bed that was “too heavy” or “too light” involved taking the Murphy bed apart to add, or remove, one or more bulky, hazardous metal springs. Heavy gloves and eye protection were a must. It is one of the many reasons why professional Murphy bed manufacturers and their customers, as well as jet airplane and luxury automobile manufacturers, prefer state-of-the-art gas springs instead of metal springs.

The Burchetts’ first test came in 1987 after they finished a prototype bed for an Atlanta hotel. With the lacquer still drying and Brenda Burchett pregnant with the couple’s first and only child, they drove from Louisville to the InterContinental Hotel in the Atlanta suburb of Buckhead.

After the hotel owner inspected the bed, he was thrilled. He asked Create-A-Bed to build more than 80 beds for the hotel. The Burchetts realized the hospitality industry was a good fit, and they continued to target it as their main point-of-sale. 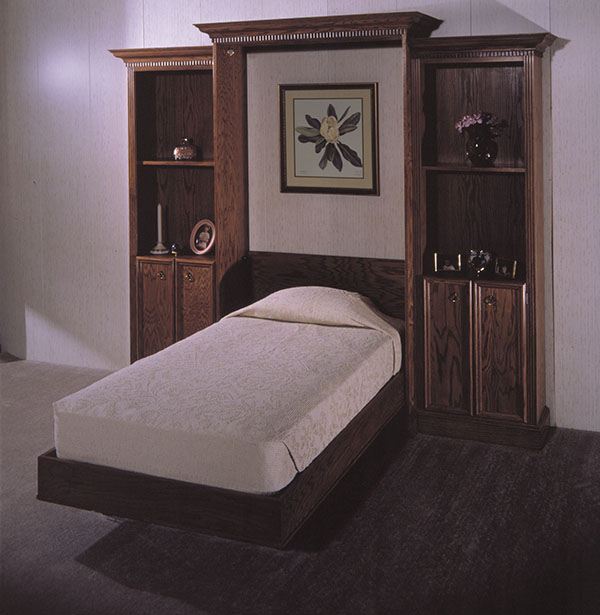 “We knew if we could get established and build a reputation in the hospitality market, we would be doing very well,” Dale Burchett said.

It was a big moment for the couple, but they still kept their other jobs.

As guests noticed the  Create-A-Bed name on the side of the pistons in the hotel rooms, the Burchetts  began hearing from them.

Some wanted to buy a Murphy bed or parts, others were do-it-yourselfers who wanted plans from which to make their own beds, and still needed the mechanism to make the bed rise and fall. 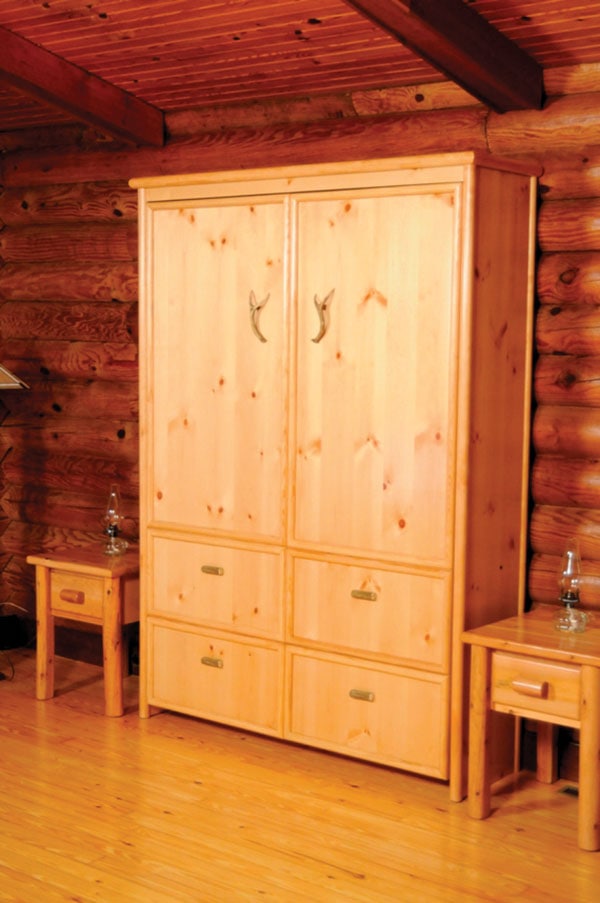 Burchett developed an instruction guide, and the couple started selling the mechanism to woodworking catalog companies in the United States, Canada and England in 1990 and 1991. This was about the same time he received his first patent. By 1996, the company began Internet sales. Shortly after taking sales online, Brenda Burchett, co-owner and vice president of Create-A-Bed, quit her advertising job.

“The internet allowed us to really level the playing field,” she said.

Sales of the online do-it-yourself kits make up about 50 percent of Create-A-Bed’s business. The other half is generated by stocking distributors and manufacturers who sell Create-A­-Bed kits to hotels, resorts, and individuals.

As internet sales continued to thrive, Create-A-Bed ceased production of the custom cabinets that hide a Murphy bed when it is folded away. The company turned its focus to the do-it-yourself kits, selling them to manufacturers that build the cabinets, but use the Create-A-Bed mechanisms to operate the Murphy beds. The beds have been installed in Hilton and Hyatt hotels, and Create-A-Bed has become a preferred vendor for The Walt Disney Company’s hotels. 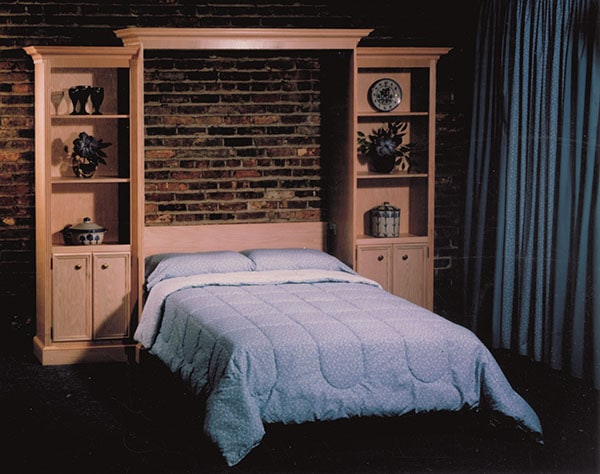 The Value of Invention

Create-A-Bed employees handle sales and fulfill online orders from the company’s headquarters on Taylor Avenue. Brenda Burchett said it costs about $800 to construct a bed from a kit, inclusive of the $299 standard kit or $369 deluxe kit.

“If you were to go buy a Murphy bed, you would pay three or four times as much,” she said.

Sales have grown 10 percent to 15 percent each year since 1991, Dale Burchett said.

Brenda Burchett said word of mouth has fueled the company’s growth, and the couple also have capitalized on a resurgence in the popularity of Murphy beds. 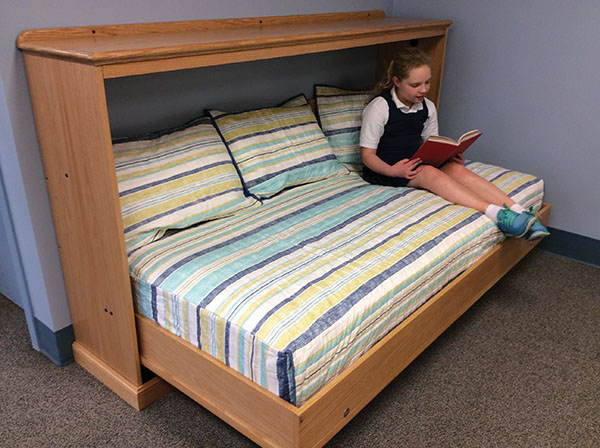 “Living spaces are getting smaller and people want multi-function,” she said. “I just think that everyone that sees this, I don’t care if you have ten bedrooms or a studio apartment, everyone can visualize once they see it, where it could work for them.”

Dale Burchett secured his first patent in 1991 for a set of locking legs on a Murphy bed frame. The patent has since expired. Burchett has continued to refine his designs and has received four patents for Create-A-Bed mechanisms for Murphy beds. Among Burchett’s other patents is one for a single piece hideaway tube leg that locks away, and another for a standardized mounting mechanism that has pre-drilled holes that can be moved depending on the type and weight of the bed used. 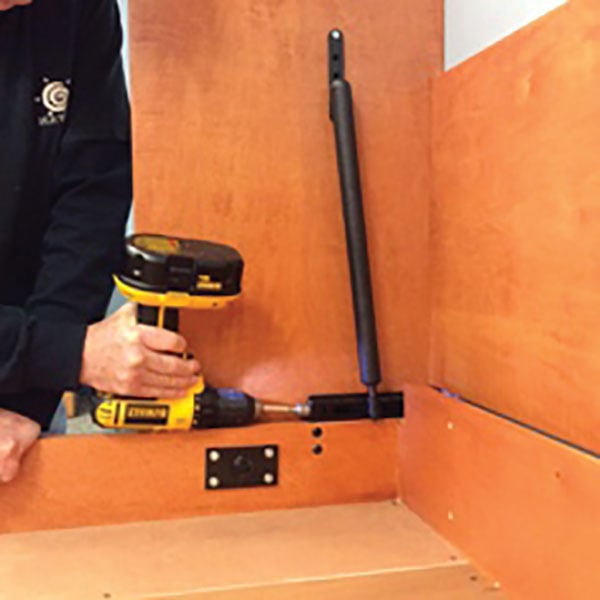 His most recent patent utilizes a worm gear, a gear in the mechanism plate that allows the installer or user to adjust the bed by twisting a knob without changing the position of the mounting bracket or changing pistons.

The Create-A-Bed® Adjustable Deluxe Murphy Bed Mechanism comes with complete illustrated step-by-step construction and assembly instructions and is designed to meet the needs of furniture and closet manufacturers, cabinetmakers and remodelers. All the hardware mounting positions have been standardized to cut construction time and reduce the possibility of human error. The state-of-the-art gas spring mechanism and heavy-duty commercial-grade American-made components are economically priced and feature a limited lifetime warranty. 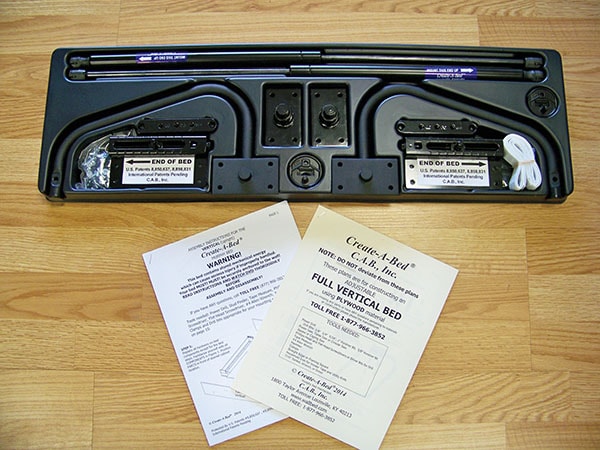