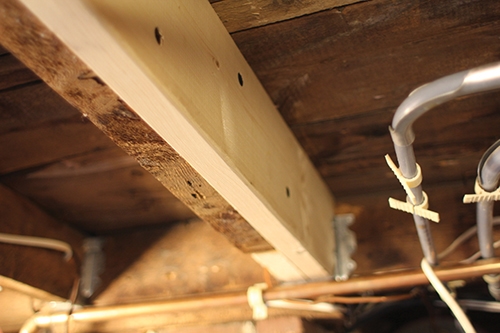 I recently had to repair a floor joist that had cracked. I suppose somewhere in the world there are floor joists that need to be repaired that have wide open, clear joist bays, with no pipes, wires or obstructions. Unfortunately, that’s not my world.

This joist was installed in 1863 and was located directly below where a heavy refrigerator now lives. From initial inspection it appeared that someone had notched the joist too much and then installed a makeshift patch. The notch was made where the floor joist recessed into a wood beam, supported by chimney corbeling. 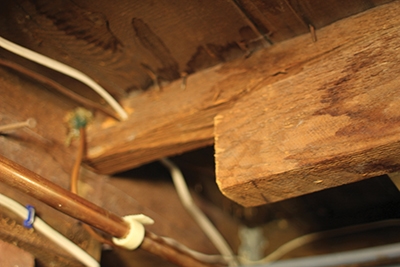 Corbeling is an “old school,” overlapping arrangement of bricks with each course extending farther out from the vertical of the wall than the course below. Corbeling was done for decoration or to support structural beams, like in this situation.

My guess is that many years back, an old vent or furnace pipe ran through this location, and the contractor needed to cut this section of joist to accomplish the installation. Today, this type of notch is not allowed by code.

Notches can compromise the strength of floor joists, although some notches are acceptable, depending on their location as dictated by the International Residential Code [IRC]. Here’s a good rule of thumb:

Not only did the aggressive notching doom this joist, it affected the structural integrity of the floor system above. To make matters worse, the refrigerator above our joist was causing the floor to sag.

A severely, cracked or sagging floor joist can get worse over time, causing the floor above it to slope or become unleveled.

Framing lumber or laminated lumber if needed for strength

First, remove or temporarily relocate electrical cables and pipes that interfere with the repair. Remove any leftover fasteners or hardware.

Correcting a problem joist is an easy repair and is usually accomplished by fastening a new joist next to a damaged floor joist, doubling the thickness of the framing member. This is referred to as “sistering.” 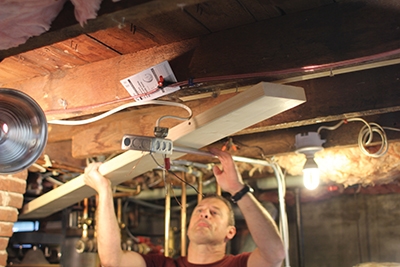 The plan was to sister a new joist next to the old one.

This floor system was built in 1863 and was later reinforced with a mid-span beam approximately 7 feet away. The damaged joist measured exactly 2 inches by 6-1/4 inches deep—a true 2×6. 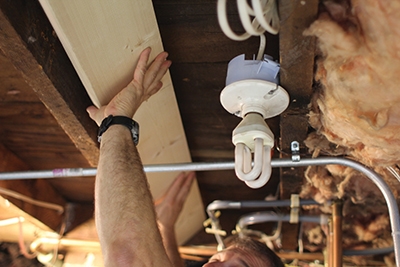 “Sistering” the joists means to fasten the joists together through the face to double the thickness of the framing.

My approach was to install a new joist next to it, resting one end 3 inches onto the mid-span beam and installing a joist hanger on the other side. I would sister the two together with structural screws.

The space between the beam and the floor boards above was 7 inches so I decided to use regular framing lumber and rip a 1/2-inch off the width of a 2×8 framing member. (Note: A nominal 2×8 board measures 1-1/2 by 7-1/2 inches.)

When installing a new joist on a foundation wall you may need to notch the bottom edge so it can fit. Each situation is different. Follow IRC and your local building code guidelines for notching framing material before doing this repair. 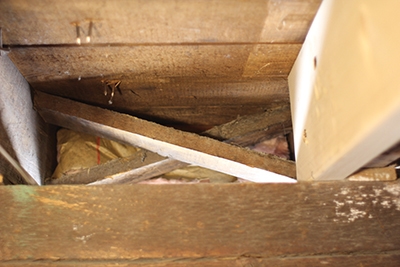 The length of the new joist was cut so the end fit 3″ over the support beam.

I used a circ saw to cut the new joist so it would sit 3 inches on top of the beam. After cutting to length, I then ripped the new joist to fit.

ROOM FOR the REPAIR

I had a few obstructions in my way; there were electrical wires, thermostat cables, a refrigerator water line, electrical conduit and heating pipes in the area. I also found old nails and pipe brackets, left in place from years past—I hate that.

The first step was to temporarily remove or relocate the electrical cables and pipes. This necessitated shutting off the electricity and disconnecting a smoke alarm and some thermostat wiring. I also had to pull wire staples and unscrew conduit and heating pipe supports. These items would all need to be replaced after sistering the joist.

Once complete I checked the subfloor above for any penetrating nails that would inhibit the new joist. I found none, but I would have used end nippers and cut them flush with the subfloor.

I also removed all the nails and old pipe hangers left from old mechanicals. 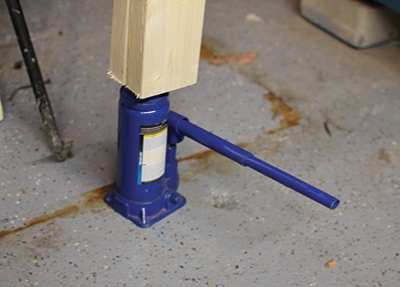 You can raise the existing joist with a bottle jack and jack post.

I positioned the new joist in place and then set up a 6-ton hydraulic jack with a jack post. The new joist fit in the space sideways but would not tilt into vertical position. The reason was the corners of the new joist, when at a 45-degree angle, caught the top of the beam and the bottom of the floor boards. Once the joist was vertical it would fit fine—hence the slight floor jacking. 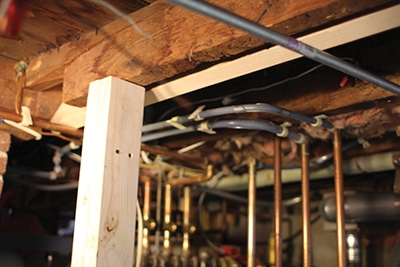 The jack post is simply two 2x4s nailed together.

I fastened two 2×4’s together to make a simple jack post. I then plumbed the 2×4 jack post and placed it directly under the cracked joist in order to lift a small sag out of the old joist as well as create a tiny bit of room for me to get the new joist against the old one at the beam.

A note on jacking: Jacking too fast can cause wall cracks above and many times it’s better to jack slowly.  A good rule of thumb is to jack only 1/8 inch a day, to get a joist level.

After lifting the cracked joist, I used a 5-pound hammer to carefully move the new joist into position.

I needed to hammer the joist only where it sat on the beam, since this is where the joist was catching. 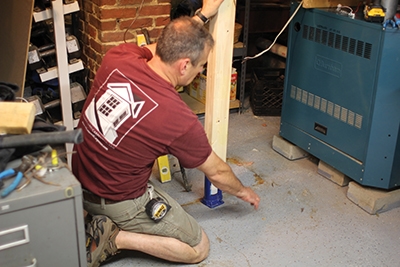 Slowly raise the jack. A good rule of thumb for floor joists is to lift them no more than 1/8″ per day.

If the new joist is hitting a beam and the floor above, and jacking is not an option, an alternative approach is to cut small bevels on the two opposing edges that the touch the beam and floor board. This helps the joist turn into the proper resting position.

I made a fast and simple jack post with two 2×4 screwed together. I was not lifting a lot of weight or lifting and holding for a long period of time so I chose not to make a “strong back” or “T-jack” post. T-shaped posts are stronger because the 2×4 boards oppose each other and counteract any bending force created during jacking. 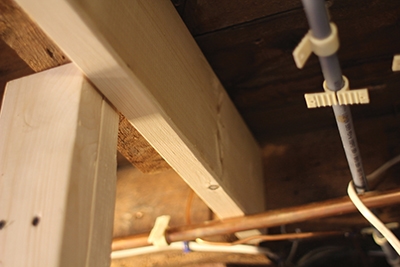 Slightly raising the joist allowed enough clearance to fit the sistered joist over the beam.

To make a T-shaped post, nail your pairs of 2x4s together, perpendicular to each other in the form of a “T.” Secure them with framing nails or structural screws. 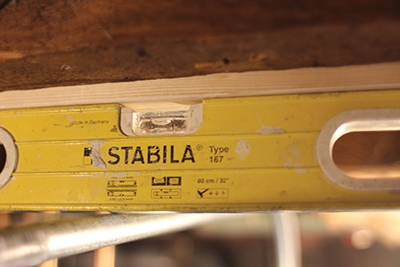 Level the joist before fastening. 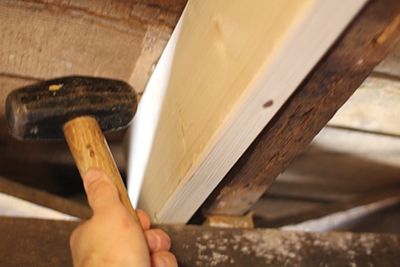 Level the joist before fastening.

After the new joist was in place (vertical and adjacent to the old joist), I used a clamp to hold them together at the chimney end. 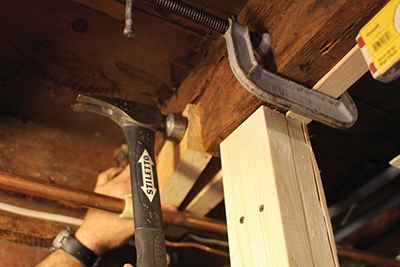 Clamp the joists tightly before screwing together. 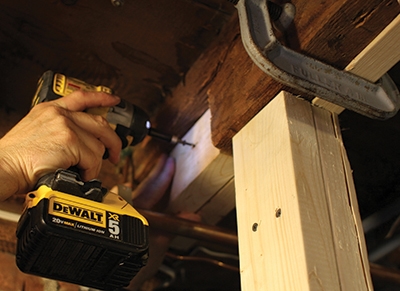 Cut a block to the fill the notch and screw it in place.

I patched in the notch on the old joist, mostly so I had structural bearing to mount the joist hanger. I also added a shim board to the width, to keep the hanger from deforming when fastened. 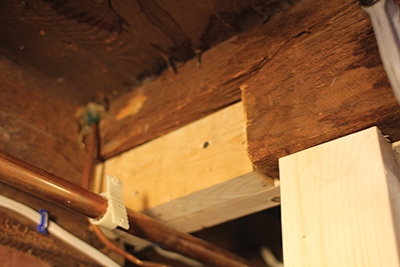 By filling the notch the joist hanger will have solid bearing for installation. 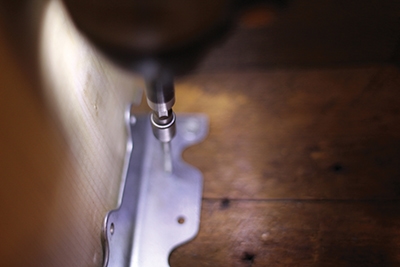 Fill all holes in the hanger with screws.

I then relocated the jack under the joist and placed a slight amount of pre-stress tension on it, ensuring that I was level, and installed a double joist hanger to support both the old and new sister joist. 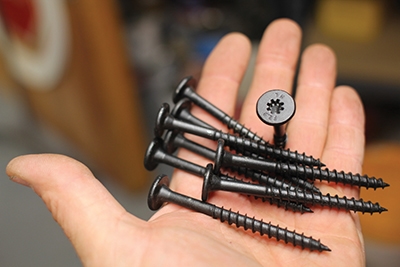 3″ Truss-lock screws were used to fasten the sistered joists together. 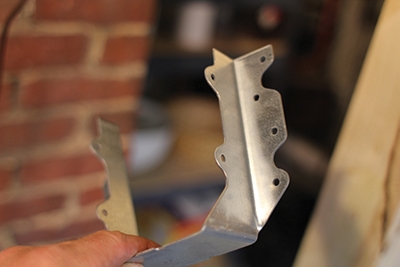 The double joist hanger was sized for “old work” for wider lumber. 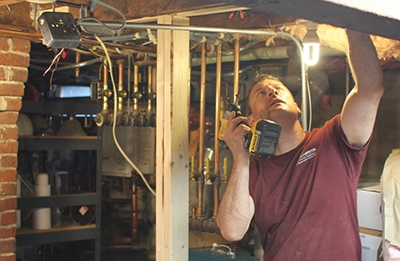 Use a impact driver to screw them in a staggered pattern throughout its length. 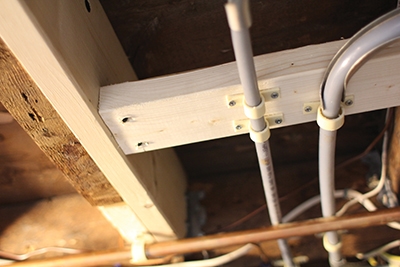 Extra blocking was added between joists to support overhead pipes.

To attach the new joist to the older one, I installed a series of 3-in. structural lag screws. Once secured, I released the jack pressure and removed the jack.

If you’re concerned about the structural integrity of a sagging, cracked or twisted joist in your house, first call a structural engineer to inspect the floor. Get a recommendation for reinforcement and strengthening measures. This type of inspection typically costs $500 to $700 and will assist with any other remodeling or building permitting projects. 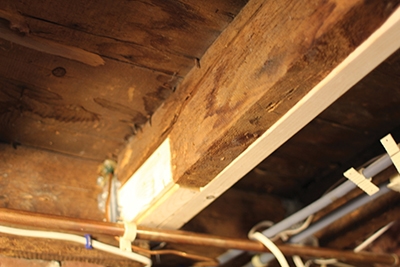 Show here is the completed repair.